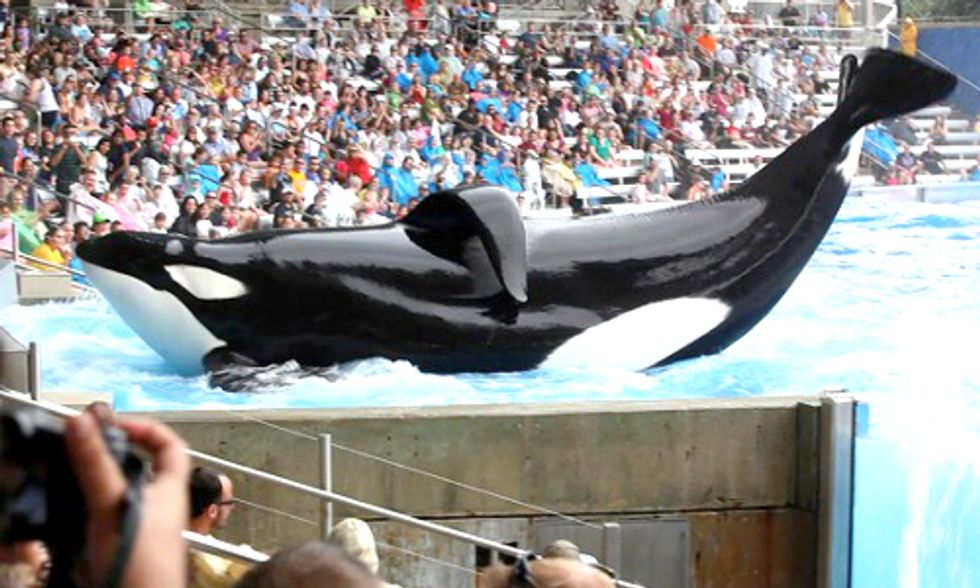 The documentary Blackfish has left a desperate SeaWorld in its wake, struggling to stay afloat in a sea of bad press and criticism from the public. As performer after performer (eight in total, so far) cancels their scheduled show for SeaWorld's upcoming “Bands, Brews & BBQ" concert series due to concerns raised by the film, SeaWorld has fought back with a list of responses that they have called an open letter from SeaWorld's “animal advocates."

Captive orcas are unable to engage in the most basic of their natural behaviors. The collapsed dorsal fin is a sign of stress, illness, injury or other conditions. Photo credit: Photo: Magnolia Pictures

While their representatives have declined to share how much money was spent putting this response out there, it is almost certain that SeaWorld spent thousands of dollars getting the letter published in eight major U.S. newspapers.

If you have read the letter, you might be finding it hard to separate fact from fiction as it is filled with SeaWorld's spin on the captive marine mammal industry. Sea Shepherd would like to present a few counterpoints to SeaWorld's arguments that will hopefully clear up any confusion.

“SeaWorld does not capture killer whales in the wild. Due to the groundbreaking success of our research in marine mammal reproduction, we haven't collected a killer whale from the wild in 35 years."

While SeaWorld admits that they have two orcas in their “care" who were captured in the wild, they leave out the violent and traumatic captures that these orcas endured. Footage of a notoriously brutal orca capture in Penn Cove, a capture which tore apart a family of orcas and left some dead, can be seen in Blackfish. Those responsible for the capture even sank the bodies of the dead whales in an effort to hide their deaths.

Tilikum's capture took place off the coast of Iceland in 1983, when he was only two years old. He was sent to SeaLand of the Pacific, before enduring a stressful transport once again to his current prison, SeaWorld Orlando.

The letter also conveniently leaves out the fact that SeaWorld plans to take some of the 18 wild-caught beluga whales that the Georgia Aquarium is currently fighting so hard to get their hands on. Some of the belugas would be split between SeaWorld Orlando, San Antonio and San Diego as well as other captive facilities. Why does SeaWorld support the captures of members of a healthy population of beluga whales from the wild, while claiming publicly that their orcas don't come from the ocean?

“We do not separate killer whale moms and calves. SeaWorld recognizes the important bond between mother and calf. On the rare occasion that a mother killer whale cannot care for the calf herself, we have successfully hand raised and reintroduced the calf. Whales are only moved to maintain a healthy social structure."

As you can see in Blackfish, SeaWorld has in fact removed calves from their mother's side and transported them to their other parks. Just as any mother would mourn for her child, the orcas have cried out long-range vocals looking for their young taken by SeaWorld.

Even if this is old footage, it is quite possible that SeaWorld continues this practice. They continue to breed marine mammals, including orcas. Some are transferred between facilities to breed or to perform. In the wild, orcas live in large pods, and in some populations calves stay with their mother for their entire life.

Regardless, the way to “maintain a healthy social structure" for orcas, animals who live in matriarchal pods, is never to separate a mother from her calf.

“We give our animals restaurant-quality fish, exercise, veterinary care, mental stimulation, and the company of other members of their species."

The “restaurant-quality fish" being served to these orcas refers to thawed dead fish, contrary to their natural hunting behavior in the wild. These fish are filled with antibiotics and vitamins to combat the effects of captivity on these often stressed, sick whales.

Wild orcas get moisture from the fish that they consume, but the frozen fish provided at SeaWorld have lost most of the moisture they once contained. So, SeaWorld feeds its orcas massive amounts of gelatin each day for hydration.

While some of these orcas may be kept with members of their species, these artificial pods are not the families that they would live with in the wild. Tilikum often remains alone, and now spends most of his time floating listlessly at the surface of his tank. He is used as a “stud" for SeaWorld's continuous supply of captive and in-bred orcas (perversely, marine park staff masturbate males in order to collect their semen, which is used to impregnate females), and occasionally he is forced to provide the “big splash" at the end of SeaWorld's performances. The in-breeding has led to unhealthy offspring and many babies have been stillborn.

"SeaWorld's killer whales' life spans are equivalent with those in the wild."

This is a lie that SeaWorld has been feeding to the public for years. They claim “no one knows for sure how long orcas live," a claim that has been refuted by marine biologists and orca researchers who have spent the greater part of their careers studying the lives and natural behaviors of orcas in the wild.

SeaWorld's claim that the life spans of captive and wild orcas are comparable is shattered by the real numbers. In the wild, the average life span for males is 30 years and 50 years for females. Males can reach an estimated maximum age of 60-70 years old, and females 80-90 years old. While SeaWorld points out “five of our animals are older than 30, and one of our whales is close to 50," this is highly unusual for orcas in captivity, including those at SeaWorld. Many die before those ages, and some even before reaching maturity.

“The killer whales in our care benefit those in the wild. We work with universities, governmental agencies and NGOs to increase the body of knowledge about and the understanding of killer whales—from their anatomy and reproductive biology to their auditory abilities."

SeaWorld's “research" on their captive orcas benefitting wild orcas is a stretch, to say the least. Captive orcas are mere shells of their wild counterparts, unable even to engage in the most basic of their natural behaviors or live in their natural social groupings. The collapsed dorsal fin that you see in captive orcas is something that SeaWorld claims is also common in the wild, but in fact is rarely seen in wild orcas. It is a sign of stress, illness, injury or other conditions.

“SeaWorld is a world leader in animal rescue.The millions of people who visit our parks each year make possible SeaWorld's world-renowned work in rescue, rehabilitation and release … We have rescued more than 23,000 animals with the goal of treating and returning them to the wild."

While SeaWorld does rescue, rehabilitate and release ocean wildlife, this statement included in their letter is disgracefully misleading. The animals released by SeaWorld are most often manatees, sea turtles and other animals who cannot be used as “performers" in their shows. Dolphins and whales and other animals such as sea lions rescued by SeaWorld who can be forced to perform tricks for food are kept and used as performers.

We have yet to hear conclusive findings on the actual success of SeaWorld's rescue and release program. They do not follow up and report on the survival of the animals who have been released from their care.

In addition, according to its 2011-12 Annual Report, SeaWorld has given only $9 million dollars over the last decade toward conservation efforts. That means for every 100 dollars in revenue they bring in, they donate approximately one cent toward saving the animals in the wild whose captive counterparts they are exploiting. That's .0001 percent of their income going to help animals in the wild. I think that might be the most telling point of all—that, in fact, SeaWorld is really nothing more than a money-making enterprise.

The bottom line is that SeaWorld is part of the massive machine that is the captive marine mammal industry, an industry willing to spew whatever lies it can in order to keep you spending your money at their parks. This industry is inextricably linked not only to the deaths of the animals in their tanks, but to the deaths of marine mammals brutally slaughtered in Taiji, Japan where dolphin trainers work side-by-side with dolphin killers to hand-pick those who are suitable for captivity—those who are “prettiest" and without visible scars. SeaWorld does not want you to know what Blackfish made so clear, and what our volunteer Cove Guardians continue to show on the ground in Taiji every day: captivity kills.

As that message spreads, a new generation is leading the way for a future of freedom for marine life. Children have begun to speak out and say that they will never spend another moment at SeaWorld or other marine parks that hold orcas and other dolphins and whales in captivity. Students have even gotten regular school trips to SeaWorld canceled.

Children may have small voices, but they also have powerful voices because they represent change. This may be the hardest hit to SeaWorld yet, as these future adults will usher in the end of support for the captive industry and a shift toward protecting marine mammals where they belong—in the wild.