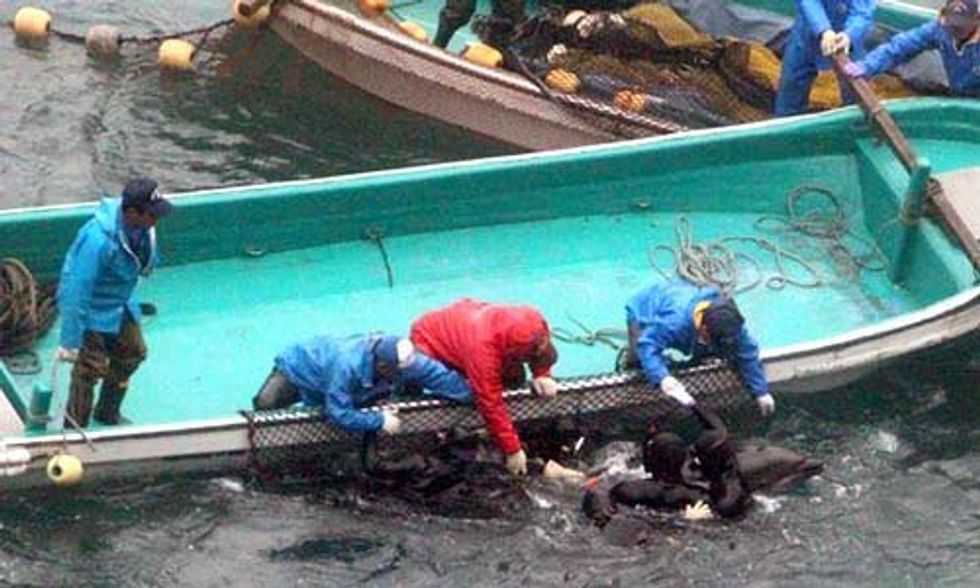 A large pod of approximately 85-90 bottlenose dolphins driven into Taiji, Japan’s infamous cove on Dec. 20 (Japan time) was held for two nights by the dolphin hunters, without food or shelter, and forced to endure brutal captive selection and slaughter that claimed the freedom of 30 dolphins and the lives of 28-30 others.

The pod was located by the hunters of the Taiji Fisherman’s Union and as the dolphins fought to escape the hunting boats, they were pushed toward shallow waters in three separate drives, until the entire pod was netted within the cove. The frightened bottlenose—including babies and juveniles, clinging to their mothers’ sides—were left in the cove overnight without food or shelter, to face continued horrors the following morning.

On Dec. 21 (Japan time), the hunters and trainers returned to the cove and began a violent captive selection process that saw a staggering 25 dolphins taken for captivity. Some did not survive the horrific ordeal and drowned in the cove. The newly captive dolphins will soon face a lifetime of imprisonment in captivity in facilities in Japan or overseas. Those remaining in the cove were left exhausted and searching for their missing family members throughout the night.

Captive selection resumed today, Dec. 22 and five additional dolphins were taken for captivity as others were slaughtered under the tarps or died during the captive selection. In total, 28-30 dolphins were killed over the two days, between the slaughter and those who succumbed during the violent captures. Sea Shepherd Conservation Society’s Cove Guardians witnessed hunters heartlessly consuming fresh dolphin meat outside the Taiji butcher house following these atrocities.

The remaining 25-30 dolphins were driven back out to sea, swimming quickly for open waters far from the deadly cove. Some were juvenile dolphins who had a hard time keeping up with the frantic pod in the chaotic drive. The Taiji hunters often dump or drive back out to sea juvenile and infant dolphins following the slaughter of their pods because these small dolphins will not produce much meat. Though they are left with little chance of survival on their own, the hunters do not count them in the season’s self-allocated kill quota.

Despite what Taiji’s fishermen contend about the separation of the captive selection and slaughter process, Sea Shepherd’s Cove Guardians have documented time and time again that the hunters and trainers work side-by-side to select the “prettiest” dolphins (those without visible scars) for captivity, while simultaneously slaughtering their fellow pod members. Dolphins enduring captive selection are forced to swim in the blood of their families. It is the profitable captive trade that allows the drive hunt to continue, and thus, raising awareness of the inextricable link between captivity and the slaughter has been a large focus of Sea Shepherd’s 2015-2016 Taiji Dolphin Defense Campaign, Operation Henkaku.

“Bottlenose dolphins are always a lucrative find for the hunters and trainers of Taiji because they are in high demand by marine parks around the world. These dolphins who swam free just days ago have been torn apart for nothing but greed and profit,” David Hance, Sea Shepherd Campaign coordinator, said.

“Sea Shepherd believes that the drive hunt could not be sustained solely by the sale of dolphin meat for human consumption; demand for this meat is at an all-time low. The global demand for captive cetaceans is the true economic fuel that drives the hunting boats.”