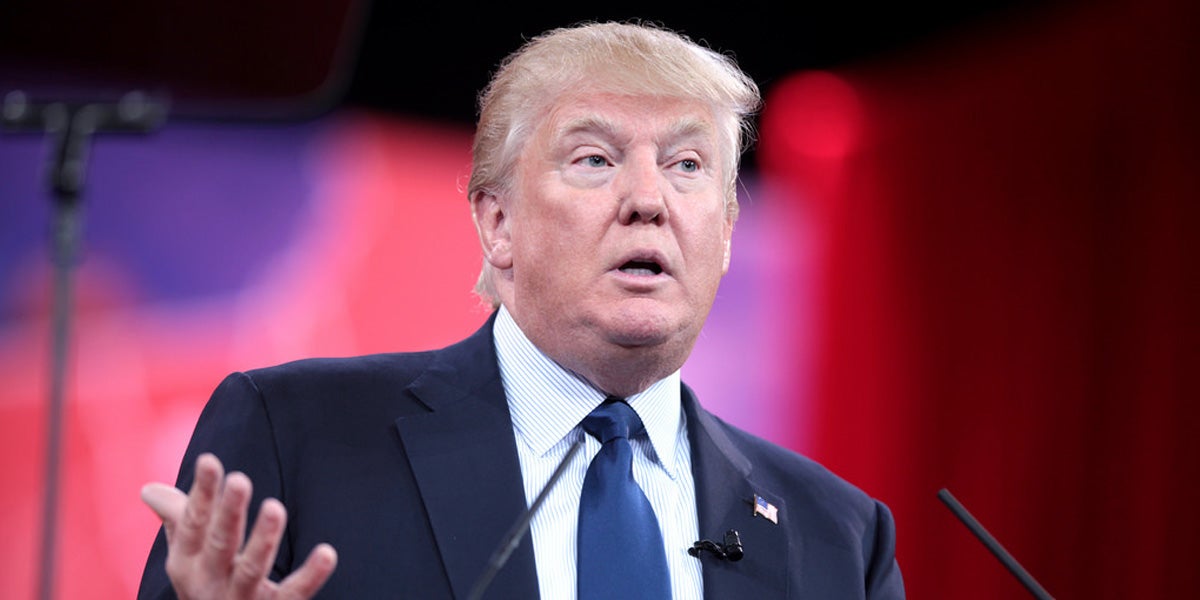 Before Inauguration Day, the Trump era has opened with an extremist agenda that poses an alarming threat to our people, our environment and the core values we share about justice, fair play and our commitment to leave future generations a livable world. Already, we’ve seen a set of cabinet nominees dominated by fossil fuel advocates, billionaires and bankers; a president-elect who says “nobody really knows” what’s happening to our climate; and a full-on witch hunt for the experts who know the truth.

This is not normal. It’s the most radical approach to American governance we’ve seen in our lifetime. Whatever we voted on in November, nobody voted for dirty water and air. Nobody voted to walk away from climate leadership and millions of clean energy jobs. And nobody voted to hand over our country to a pollute-ocracy that puts polluter profits first—and puts the rest of us at risk.

The following list addresses some, but not all, programs, policies and initiatives the Trump administration and GOP lawmakers have targeted. This could become the worst legislative and executive assault in history against the common sense safeguards we all depend on to protect our environment and health. At risk is the water we drink, the air we breathe, our public oceans, coasts and lands and the very approach we’ve taken for generations in this country to protect our common inheritance.

At the Natural Resources Defense Council (NRDC), we will stand up and hold this government to account, by making sure the public understands what’s at stake—for our country, our people and the common future we share.

Here are 10 questions the Senate must ask Scott Pruitt and Rex Tillerson. https://t.co/vsK1hAhcT4 via @EcoWatch

International Climate Agreement: The Paris climate agreement signed by nearly 200 nations and effective as of Nov. 4, 2016 is a global response to the threat of climate change. It aims to hold global temperature rise this century well below 2 degrees Celsius and to pursue efforts to limit the temperature increase even further to 1.5 degrees Celsius. More here and here.

HFC International Commitments: In October 2016, more than 140 countries signed onto the Kigali Agreement, which calls for phasing down powerful climate-warming pollutants called hydrofluorocarbons (HFCs) under the Montreal Protocol, the treaty that saved the ozone layer. Industry supports the agreement. More here.

Reducing Methane Pollution and Natural Gas Waste in the Oil and Natural Gas Industry (BLM & EPA): These standards will reduce methane, volatile organic compounds (VOCs), and toxic air emissions from fracking and other oil and gas operations. Leaks and purposeful venting waste gas that could be sold and used while threatening health and worsening climate change. More here and here.

Assessing Greenhouse Gas Emissions and Climate Impacts under the National Environmental Policy Act (CEQ): The White House Council on Environmental Quality issued guidance to federal agencies on analyzing the climate impacts of their proposed actions before deciding on how to proceed. More here.

Vehicle Standards: To reduce greenhouse gas emissions, the EPA set tighter fuel economy standards for cars and light trucks for 2022-2025. The State of California has similar auto standards through 2025, authorized under the Clean Air Act via an EPA waiver. EPA also set standards for medium- and heavy-duty trucks to save fuel and reduce carbon pollution. More here.

DOE Energy Efficiency Standards: The Obama administration (DOE) minimum efficiency standards for refrigerators, air conditioners, clothes washers and other appliances and equipment save U.S. households on average $500/year on energy bills. These standards, which are required by law, also are often supported by manufacturers who do not want to deal with a patchwork of state regulations and because they know consumers will benefit from more efficient appliances. More here.

Arctic/Atlantic: In 2016 the Obama administration excluded the Arctic and Atlantic oceans from the next 5-year oil and gas leasing plan and provided permanent protections from all future drilling for the majority of the U.S. Arctic and key portions of the Atlantic. More here and here.

Turning Federal lands and Waters over to Private Fossil Fuel Companies: The Trump administration may quickly move to expand coal, oil, and gas leasing across the federal estate, opening new areas and accelerating permitting and approvals for existing leases. Legal challenges are expected for each action. More here.

Keystone XL: In November 2015, President Obama rejected the proposed Keystone XL tar sands pipeline, which would have undercut America’s global leadership on fighting climate change. The pipeline would have run 1,200 miles from Canada through Nebraska to the Gulf Coast carrying more than 800,000 barrels of carbon-heavy petroleum daily. More here.

Dakota Access Pipeline: Last month, the Obama administration ordered a full environmental impact statement of the pipeline and a review of the route in response to concerns of indigenous Americans that their voices had not been heard. More here.

Pebble Mine: This proposed acid-generating copper and gold mine in Bristol Bay, in southwest Alaska, threatens a massive salmon fishery, beluga whales, a critical watershed and other wildlife. The IUCN World Conservation Congress opposed it. The EPA has made significant progress protecting the area through the Clean Water Act. More here.

Antiquities Act: Under the 1906 Antiquities Act, the Obama Administration has moved to protect our natural and cultural heritage by designating monuments that include more than 1 million acres of land in Utah to be co-managed with tribes, and the world’s largest marine protected area. There could be challenges to the act and individual monuments. More here and here.

Public Lands: The Obama Administration has expanded areas designated as public lands, which are held in the public trust for all Americans, helping protect them from environmental damage. Republicans in Congress, meanwhile, have launched a concerted effort to sell off public lands through budget riders and bills. More here and here and here.

Roadless Rule: Enacted in 2001 under President Clinton, this protects almost 60 million acres of national forest land against logging and road building, 17 million of which is old-growth forest in the Tongass in Alaska. Alaska is challenging the rule in federal court in DC. More here.

Endangered Species Act: The law has added protections for endangered sage grouse, gray wolves and salmon. The Department of Justice also is defending in court recovery plans. More here and here and here.

Marine Mammal Protection Act: The act has been used to limit offshore oil and gas development and to protect marine mammal species such as whales and dolphins from excessive Navy sonar. More here.

Agricultural Pollution and Dangers to Health

Decision Regarding “Neonic” Insecticides & Bees: Early in 2016, EPA issued a scientific finding that the most prominent “neonic” (neonicotinoid) insecticide, Imidacloprid, widely used on cotton and soybeans, is harmful to bees. More here.

Ozone Standard: In 2015, the administration strengthened ozone health standards that protect public health, especially for children, older adults and people with lung diseases such as asthma. The standards also will improve the health of trees, plants and ecosystems. More here.

Toxic Air Pollution Standards: There have been legal and legislative attacks on EPA standards limiting toxic air pollution from cement and brick kilns and industrial boilers. These help avoid an estimated 8,000 premature deaths and 52,000 asthma cases per year. Brick Kilns litigation could heat up in late February. More here and here.

Army Corps’ Nationwide Permit Renewals: The Army Corps of Engineers uses general permits to authorize discharges of dredged or fill material into waters protected by the Clean Water Act. The existing slate of roughly fifty nationwide general permits is due to expire on March 18, 2017, and the Army Corps has been on target to finalize a replacement set of permits by that date. More here.

California Bay Delta and San Joaquin River: Congress and the Trump Administration could attempt to undermine federal protections for salmon and other endangered species in California’s Bay-Delta estuary, and possibly try to repeal the settlement agreement to restore California’s San Joaquin River. House Republicans have passed similar legislation in recent years, threatening thousands of fishing jobs, water quality for millions, and the long term health of this estuary. More here and here.

Pesticide that Harms Kids: EPA recently said it plans to ban insecticide chlorpyrifos because it harms children’s brains. The agency is due to finalize this ban in March 2017. More here.

Toxic But Ineffective Chemicals in Antibacterial Soaps: In September 2016, in response to NRDC’s petition and litigation, FDA banned certain antibacterial chemicals—such as triclosan—in soaps that were not proven effective and posed health hazards. More here.

Science on Carcinogens: The chemical industry has targeted a National Institutes for Health report on cancer-causing chemicals. Also targeting the International Agency for Research on Cancer (IARC), which has linked Roundup (glyphosate) to cancer. More here.

Health Risks of Herbicide Glyphosate: EPA to decide whether this ingredient in Monsanto’s Roundup causes cancer. The International Agency for Research on Cancer found it does. Its use is linked to butterfly decline. More here.

TSCA/10 Priority Chemicals Determination: EPA has proposed its 10 priority chemicals to evaluate under the recently updated Toxic Substances Control Act and is due to finalize that. More here.

Regulations from the Executive in Need of Scrutiny (REINS) Act: This bill, which the House has passed several times, would basically shut down the entire regulatory system, not just on environmental issues, by preventing any “major” regulation from taking effect unless both houses of Congress vote to approve it within a limited time period. More here.

Searching for and Cutting Regulations that are Unnecessarily Burdensome (SCRUB) Act: This bill, passed by the House, would establish a “regulatory review” commission to identify redundant or “obsolete” regulations to repeal. Requires a “cut-go” one-in, one-out approach to agency rule-making and 15 percent cut in overall “costs,” measured as costs to industry. More here.

Regulatory Accountability Act (RAA): This bill, passed by the House, would revamp and significantly slow down and even shut down, the regulatory process. One provision could result in preventing rules from ever taking effect by enabling industry to repeatedly ask for more analysis. The provision is similar to a fatal flaw in the original TSCA law that Congress voted to remove in the new version of that Act. More here.

“Secret Science” Bills: This bill, passed by the House, would make it difficult for EPA to issue environmental standards by making it impossible for the agency to use many kinds of scientific studies and economic models. More here.

Trump’s 100-day Plan to Arbitrarily Cut Regulations: The president-elect has promised to eliminate two regulations for every new one it approves. But regulations exist to help ensure consumer health and safety protections. More here.

The Right to Public Engagement on Federal Actions: the National Environmental Policy Act (NEPA): Signed into law on Jan. 1, 1970, NEPA ensures that the government assesses the environmental impacts of proposed actions—such as permit applications, federal land management and constructing highways—and provides transparency along with giving citizens a voice in government decisions. Rolling back or gutting NEPA has been considered in Congress. More here.Gage Skidmore