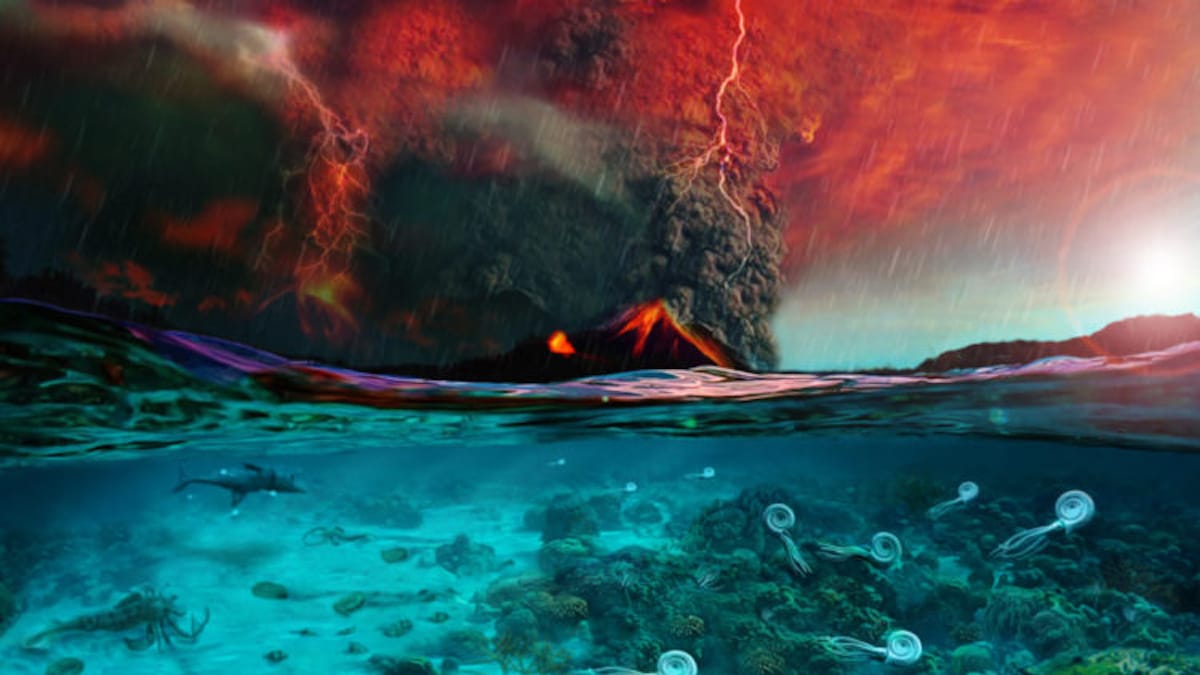 The excess carbon dioxide emitted by human activity since the start of the industrial revolution has already raised the Earth’s temperature by more than one degree Celsius, increased the risk of extreme hurricanes and wildfires and killed off more than half of the corals in the Great Barrier Reef. But geologic history shows that the impacts of greenhouse gases could be much worse.

In fact, scientists from Scotland’s University of Saint Andrews and two major German research centers have for the first time determined a “conclusive picture” of the initial trigger and subsequent processes responsible for Earth’s biggest mass extinction. The answer? Massive amounts of carbon dioxide spewed into the atmosphere from a volcanic eruption.

“We are dealing with a cascading catastrophe in which the rise of CO2 in the atmosphere set off a chain of events that successively extinguished almost all life in the seas,” study lead author Dr. Hana Jurikova told The Independent.

The study, published in Nature Geoscience Monday, sought to understand the mechanisms behind an event known as the “Great Dying,” the University of Saint Andrews explained in a press release. This was a period around 252 million years ago between the Permian and Triassic epochs in which 95 percent of marine species were wiped out within tens of thousands of years. It is the closest life on Earth has come to total extinction.

Scientists have advanced many theories for what caused this turn of events, including a release of methane from the seafloor and volcanic activity, but this is the first time a group has determined the exact cause, the GEOMAR Helmholtz Centre for Ocean Research Kiel, one of the research centers involved in the new study, said.

The extinction process went something like this, as Saint Andrews explained.

“It took several hundreds of thousands to millions of years for the ecosystem to recover from the catastrophe, which profoundly altered the course of evolution of life on Earth,” Jurikova said.

The researchers, who also included members of the Helmholtz Centre Potsdam GFZ German Research Centre for Geosciences, were able to reach their conclusions by examining the shells of fossil brachiopods.

“These are clam-like organisms that have existed on Earth for more than 500 million years,” Jurikova explained in the GEOMAR press release.

The researchers were able to assess the pH levels in the ocean based on the different isotopes of boron in the fossilized shells. Because oceanic pH levels are tightly linked to atmospheric carbon dioxide, the team could then create a model of the atmosphere at the time.

“With this technique, we can not only reconstruct the evolution of the atmospheric CO2 concentrations, but also clearly trace it back to volcanic activity,” study coauthor Dr. Marcus Gutjahr of GEOMAR said in the press release.

The amount of carbon dioxide released by the Siberian volcano was more than 40 times all the carbon dioxide currently held in fossil fuel reserves, including everything that has been released since the start of the industrial revolution, according to Saint Andrews.

Still, the researchers told The Independent that the study offered “bleak lessons” for humanity as we face the sixth mass extinction.

“Ancient volcanic eruptions of this kind are not directly comparable to anthropogenic carbon emissions, and in fact all modern fossil fuel reserves are far too insufficient to release as much CO2 over hundreds of years, let alone thousands of years as was released 252 million years ago,” Jurikova told The Independent. “But it is astonishing that humanity’s CO2 emission rate is currently fourteen times higher than the annual emission rate at the time that marked the greatest biological catastrophe in Earth’s history.”