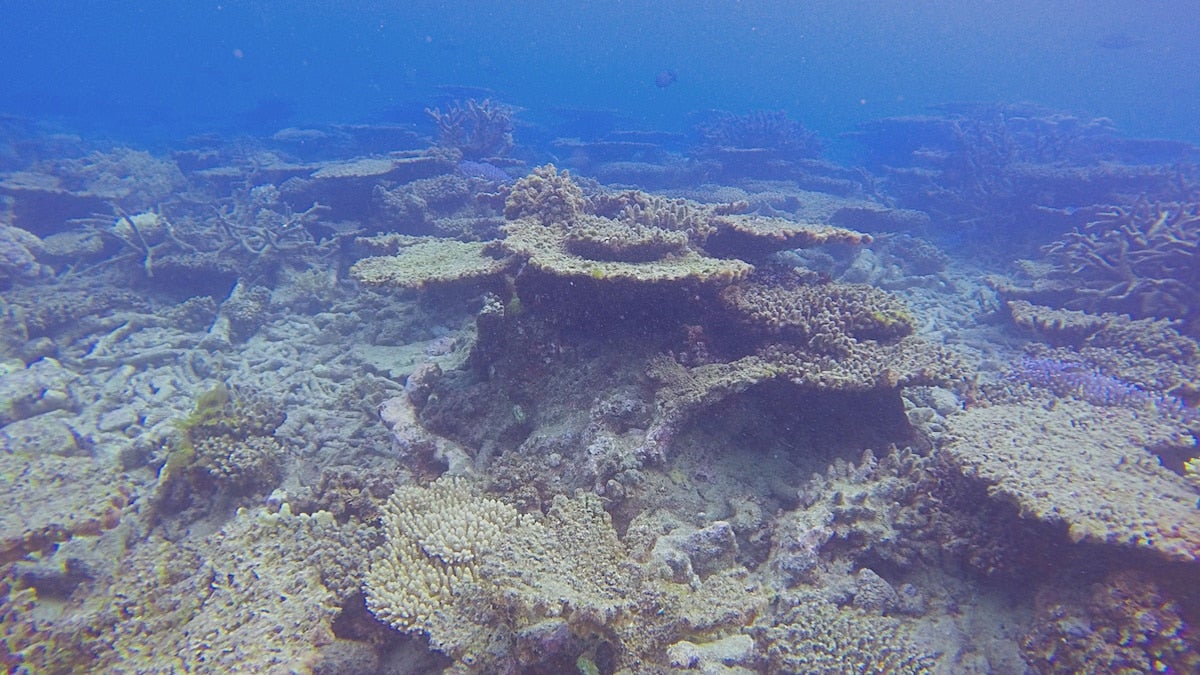 The Great Barrier Reef has lost more than 50 percent of its coral in the last 25 years. Andreas Dietzel

The Great Barrier Reef has lost more than 50 percent of its coral in the last 25 years, and the climate crisis is to blame.

Researchers from the ARC Centre of Excellence for Coral Reef Studies (CoralCoE) made an in-depth study of how coral communities and their colony sizes had changed between 1995 and 2017 along the entire length of the reef. The results, published in the Proceedings of the Royal Society B Wednesday, sound an urgent call for climate action.

“There is no time to lose — we must sharply decrease greenhouse gas emissions ASAP,” the researchers said in a CoralCoE press release.

The researchers found a decline in every size and species of coral in both shallow and deep water. The corals were especially devastated by back-to-back bleaching events in 2016 and 2017, study author and James Cook University professor Terry Hughes told The Guardian.

While all the corals were impacted, these bleaching events took an especially heavy toll on branching and table-shaped corals, Hughes said in the press release. This is a big deal because these architectural corals provide habitats for fish. Without them, fisheries decline.

“The reef is flatter and less three dimensional now,” Hughes told The Guardian.

Coral bleaching, which occurs when hot water temperatures drive the algae that gives corals food and color from their homes, also struck the southern part of the reef at the beginning of 2020. This event was not included in the study, so the reef may be even more depleted than the researchers calculated.

The study’s findings also have implications for the reef’s ability to reproduce itself.

“A vibrant coral population has millions of small, baby corals, as well as many large ones — the big mamas who produce most of the larvae,” lead author of CoralCoE Dr. Andy Dietzel said in the press release. “Our results show the ability of the Great Barrier Reef to recover — its resilience — is compromised compared to the past, because there are fewer babies, and fewer large breeding adults.”

Bob Richmond, a research professor and director of the Kewalo Marine Laboratory at the University of Hawaii at Manoa who was not involved with the study, told The Washington Post he was impressed with the work and agreed the reef was in trouble.

“If I don’t see one-year-old, two-year-old, three-year-old corals, I know that reef is dead,” he said. “It just doesn’t know it yet.”

The Great Barrier Reef stretches almost 133,000 square miles, making it the largest coral reef in the world, according to CNN. It provides a habitat for more than 1,500 species of fish and 411 species of hard corals.

It is also hugely important for the economy of Australia, The Washington Post pointed out. It drew more than two million tourists every year before the pandemic. Despite this, Australia continues to be the world’s top coal exporter.

Hughes explicitly called out Australia’s pro-fossil fuel policies as a “profound policy-failure” for managing the reef on Twitter. He said the only hope for the reef’s survival was to limit global warming in line with the Paris agreement.

“There’s not much time to lose,” he told The Guardian. “I think if we can control warming somewhere between 1.5-2C [above pre-industrial levels], as per the Paris agreement, then we’ll still have a reef. But if we get to 3-4C because of unrestrained emissions then we won’t have a recognisable Great Barrier Reef.”