Less oxygen dissolved in the water is often referred to as a "dead zone" (in red above) because most marine life either dies, or, if they are mobile such as fish, leave the area. Habitats that would normally be teeming with life become, essentially, biological deserts. NOAA

What comes to mind when you think of Tyson Foods? A chicken nugget? A big red logo?

How about the largest toxic dead zone in U.S. history? It turns out the meat industry—and corporate giants like Tyson Foods—are directly linked to this environmental catastrophe in the Gulf of Mexico, and many others.

Industrial-scale agriculture to support America’s livestock is the number one source of water pollution in the country. But while industrial agriculture to feed animals raised for meat is currently resource-intensive and ecologically destructive, it doesn’t have to be. Solutions exist which, if adopted, would allow the meat industry and agricultural corporations that sustain it to reduce their impact on water and the planet.

That’s why Mighty Earth has launched the Clean It Up, Tyson campaign in order to hold this industry accountable to our communities and the environment. Corporations can and should respect the health and well-being of their customers, and the landscapes that allow them to profit. Considering America’s current political climate, and the increasing severity of environmental problems across the globe, collective action and corporate-targeted campaigns like this one have never been more urgent. 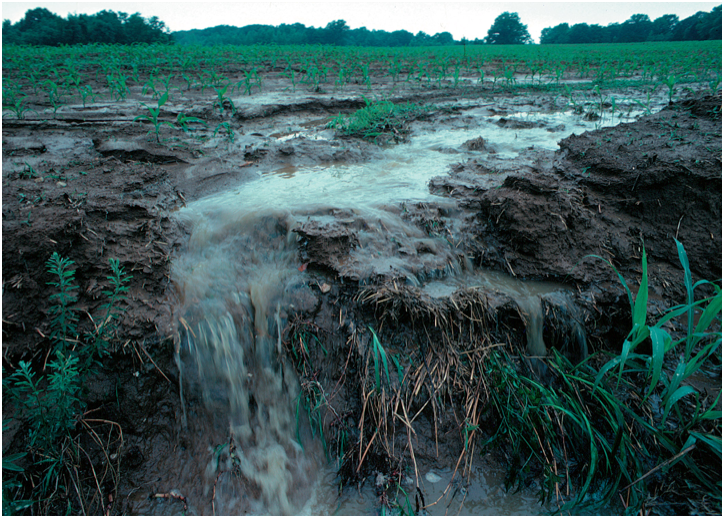 In a country with five times as many livestock animals as humans, it takes a lot of land to grow feed for the meat that ends up on consumers’ plates. More than a third of America’s agricultural land is dedicated towards the production of corn and soy, but humans consume less than 10 percent of this, according to Mighty Earth’s campaign report. The vast majority is consumed by livestock.

What many people don’t realize is that this livestock feed production is controlled by a very small number of large and powerful corporations, making huge upstream profits, but creating massive downstream pollution. These companies—ADM, Bunge, Cargill (often referred to as the ABCs)—don’t have much of a public reputation, as they don’t sell directly to individual consumers. Under our current regulatory system, they’re also not responsible for their run-off or excess fertilizer use, both of which are classified as “non-point source” pollution. In other words, soil erosion and run-off from enormous swaths of America’s crop fields are washing into the waterways, and taxpayers shoulder the burden. These two factors mean that industrial agriculture companies operate with impunity while polluting the land, rivers and oceans.

How animal feed moves through the meat supply chainMighty Earth

A recent report by Environmental Working Group found that more than 200 million Americans—more than half of the people in our country—are exposed to contaminated drinking water due to fertilizer pollution. The estimated clean water costs to taxpayers are more than $2 billion per year. The nitrate and phosphorous in fertilizer that leaches into our drinking water are associated with various types of cancers, birth defects and other health problems. This burden disproportionately falls on rural communities, whose water treatment systems were not built to deal with the levels of chemicals they’re now facing.

“The EPA (U.S. Environmental Protection Agency) ordered Pretty Prairie, Kansas, to build a new water treatment plant last year to lower nitrate levels that could cost $2.4 million—well over $3,000 for every person in town,” EWG reported. “Eighty-five percent or more of the communities with elevated levels of nitrate have no treatment systems in place to remove the contaminant.”

Another alarming characteristic of industrial agriculture is that because it’s so intensive, fields are quickly exhausted, and the industry must continuously expand to new areas. For this reason, the American prairie and grassland ecosystems are being altered faster than the Amazon rainforest.

A recent University of Wisconsin study estimated that this loss of natural grassland “could have emitted as much carbon dioxide into the atmosphere as 34 coal-fired power plants operating for one year—the equivalent of 28 million more cars on the road,” noted Mighty Earth. These unique landscapes are among the most threatened in the world, and are irreversibly damaged after conversion into crop fields, often to grow corn and soy. At a time in our country when public lands are being attacked from many angles, industrial-scale agriculture to support the meat industry is the biggest challenge these ecosystems face.

Luckily, there are a number of simple, cheap and effective ways in which the meat industry could adopt sustainability measures into supply chains to and protect clean water. For example, currently less than 30 percent of fertilizer applied to massive industrial-scale crop fields is actually absorbed by the plants. Instead, most of this washes off as fertilizer pollution and contaminates waterways.

This is what has caused the largest dead zone in U.S. history in the Gulf of Mexico. It is currently more than 8,000 square miles, where no marine life can survive due to toxic fertilizer pollution. By using more precise application methods, farmers could save money on fertilizer, and less of it would contaminate the water. Additionally, techniques like using cover crops, diversifying crops beyond corn and soy, and limiting tillage are proven ways to reduce soil erosion. 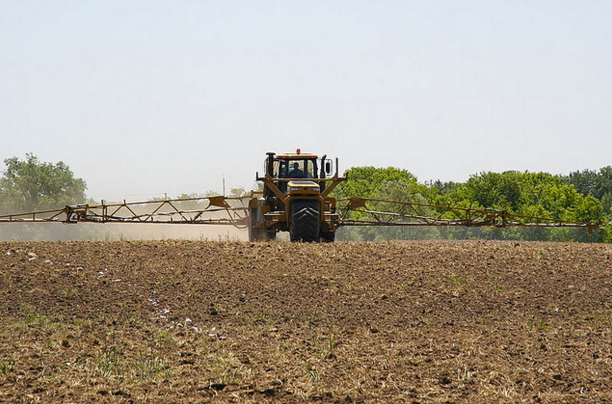 A few months ago, Mighty Earth conducted a comprehensive study into which areas of America are experiencing the worst water contamination from fertilizer pollution (Figure 1), and the most dramatic land conversion into livestock feed crop fields (Figure 2). This groundbreaking research also identified the agricultural and meat industry corporations most present in these areas. The clear culprit driving these destructive agricultural impacts was identified: Tyson Foods.

The country’s largest meat company, the second largest globally and the pioneer of the industrial meat system, Tyson Foods produces one in every five pounds of meat: more than 20 percent of all chicken, beef and pork. They are therefore uniquely placed to drive solutions, incentivize their suppliers to farm more responsibly, and reduce the catastrophic effects that industrial-scale agriculture has on the environment and public health. 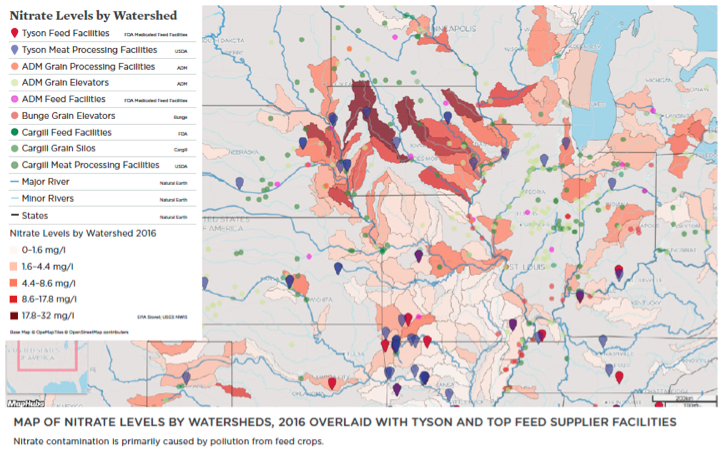 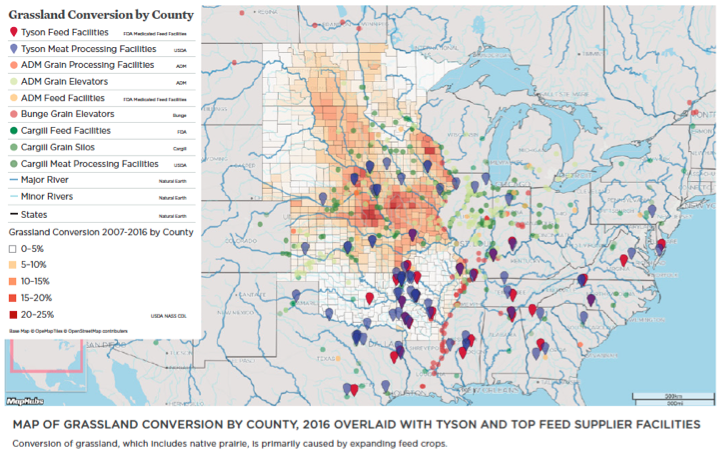 “Recent commitments from a growing number of food companies like Kellogg’s, General Mills, Walmart, PepsiCo, and even Tyson’s competitor, Smithfield, are showing the way forward,” reported Mighty Earth. “These companies have committed to improve fertilizer and soil-health practices in their U.S. crop supply chains and have launched programs and practices that Tyson and other meat producers can adopt to drive improvements in their supply chains.”

Tyson Foods has the power to make these changes too, and therefore to change the entire meat industry for the better—and we have the power to ask them to do it.

Tyson’s prior commitments to sustainability are admirable, but don’t go far enough. With the demand for meat rising, and the threats to our environment increasing, the stakes could not be higher.

This issue affects all of us. As far back as 2013, the majority of American waterways were contaminated by fertilizer pollution, according to the EPA. That’s why Mighty Earth is organizing in communities across the country to ask Tyson to protect our water and our environment. By signing the petition or making a call to Tyson’s corporate headquarters (you can use our calling script for pointers), you can add your voice to the rising chorus calling for cleaner meat. Tyson Foods must lead the way to a more sustainable food system and protect the one planet we have.

Shana Gallagher is one of seven organizers around the U.S. launching Mighty Earth’s #CleanItUpTyson campaign.

Arsenic and Other Toxins Found in 80% of Baby Formulas