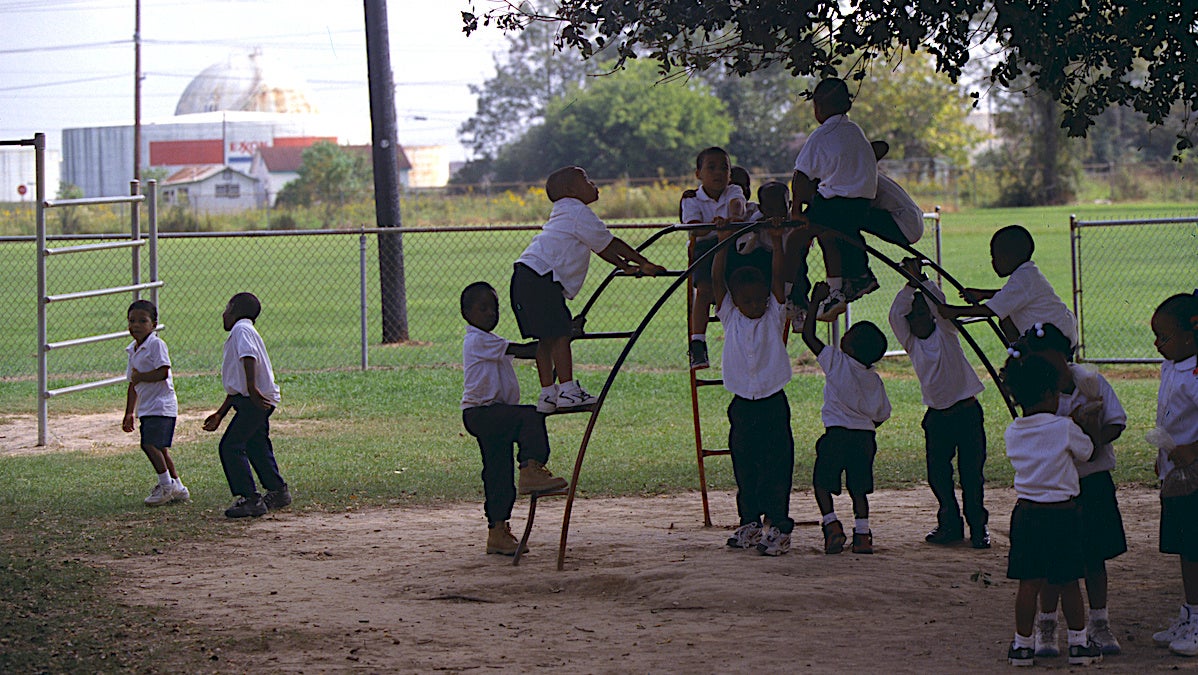 The Trump administration is trying mightily to gut the 50-year-old National Environmental Policy Act (NEPA), the law that mandates rigorous, science-based environmental impact reviews for major infrastructure and construction projects prior to federal permitting. NEPA also reserves significant time for the public to weigh in on the impact of projects to their communities.

The loss of public input in the administration’s proposed changes to NEPA has environmental justice leaders up in arms. For them, the silencing amounts to regulatory racism.

At a Feb. 25 public hearing on the proposal in Washington, DC, Hilton Kelley, a 2011 Goldman Environmental Prize winner for his work in reducing emissions from petrochemical facilities and incinerators in Port Arthur, Texas, told the White House Council on Environmental Quality (CEQ) that, with at least six explosions and plant accidents in his city over the last year, the events had become so common that children play basketball right through the noise and plumes.

“When you’re talking about weakening NEPA and expediting a process, this is what happens,” Kelley said, as reported by The Associated Press. “Don’t lessen the regulation. Don’t silence our voices.”

That is precisely what the Trump administration is trying to do in rewriting the implementation guidelines for this bipartisan act signed by President Nixon and designed to allow the public input needed to ensure that “man and nature can exist in productive harmony.”

Cheered on by the U.S. Chamber of Commerce and the nation’s leading fossil fuel, chemical, construction, manufacturing, airline, trucking and farming interests, the Trump administration is trying to cut the average time for environmental reviews by more than half.

The Trump NEPA rewrite would undermine the act by allowing companies and contractors to write up their own environmental reviews. It would free builders of chemical and petrochemical factories, oil and gas pipelines, highways, port terminals and other infrastructure from accounting for the cumulative effects over time of pollution, land and wetland loss and erosion.

Plant owners seeking federal approval would no longer need to fret about indirect effects of downstream and downwind pollution, nor about a facility’s contribution to climate change.

For communities long polluted by industry, which are disproportionately poor and of color, the Trump administration’s changes promise particular devastation. Such communities already suffer higher rates of illnesses from asthma to cancer, life-altering effects such as low birth weight and cognitive child development, and daily insults to quality of life in diesel exhaust, soot penetrating into homes and contaminated yards and playgrounds.

If the administration has its way, NEPA implementation guidelines would be rewritten so that even in neighborhoods already densely packed with toxic industries, a proposed facility need only assess its own pollutants, not how much they combine and compound those of nearby facilities to worsen the overall quality of air, water and land.

To make sure residents cannot complain about such compounded damage, the Trump administration is trying to severely limit the opportunity for mothers, fathers, seniors, teens and community leaders to speak directly to the government.

The rollout of the proposed changes is a case in point. Despite the sweeping environmental risks Americans currently face, with air pollution that kills 100,000 people per year and 77 million Americans drinking tap water in violation of health regulations, the White House Council on Environmental Quality allowed only two hearings on the proposed changes to NEPA before the close of public comment period March 10, in Washington, DC, and in Denver. By way of comparison, The Washington Post reported that major issues involving NEPA usually get around nine hearings.

One community leader who did get into the Washington hearing called out the cynicism of the Trump administration for its scant public scheduling. Belinda Joyner of Northampton County, North Carolina, who has spoken out against dumping in her lower-income African American community by a wood pellet facility, industrial-scale hog farms and a part of the proposed Atlantic Coast natural gas pipeline, told the CEQ panel, “You act like you’re listening, and I’m not going to say you’re not. But we see the results of these hearings.”

In Denver, indigenous Americans spoke out strongly against the destruction of NEPA. Seventeen-year-old Navajo Najhozhoni Rain Ben drove seven and a half hours to say to the CEQ panel, “We shouldn’t be talking about this. We should be implementing plans for the future. This is not for the future. This is for profit.” Musician and spoken word artist Lyla June Johnston, also Navajo, drove six hours from Santa Fe to tell the panel that the proposed changes were “a slap in the face to our democracy — a slap in the face to the integrity of our mother earth.”

The Modern Need for NEPA

NEPA originally was conceived amid growing public awareness and outrage in the 1960s over river and lake pollution, pesticide poisoning of birds, highway proposals that would blast communities apart, and tanker oil spills that fouled beaches and wiped out wildlife. There is no less need for it today as climate change is already slapping America and the world in the face with more devastating storms, chronic coastal flooding, deadly heat waves, western and Alaskan wildfires and acceleration of species extinction.

There is arguably even more of an immediate need for NEPA in communities that were dumping grounds long before the concept of climate change, even before the signing of the act itself. It has been proven beyond coincidence that — similar to the tobacco industry marketing to vulnerable populations — toxic industries and builders of massive infrastructure projects target locales where they assume residents will offer the least political resistance.

That significantly explains the shameless shoehorning of petrochemical plants into Louisiana’s Cancer Alley in predominantly African American areas. That explains the routing of the Keystone XL pipeline and the Dakota Access Pipeline through lands and over waters indigenous Americans consider sacred, and the Atlantic Bridge pipeline protested by Joyner. It explains the concentration of industry in heavily Latino and African American Southeast Chicago, which is dealing with an endless siege of dust and neurotoxic contamination from coal ash, lead, and manganese dust.

That explains the ramrodding of roads through redlined communities and why people of color drove or flew hundreds and thousands of miles for the only two hearings offered by this administration. They said the NEPA, especially in a White House that is also hollowing out the U.S. Environmental Protection Agency, is one of the last tools standing between them and a wholesale hostile invasion by industry.

Hope in the Courts

There is a glimmer of hope that the U.S. courts will determine that President Trump and his industrial partners are reaching too far in the rewrite of NEPA, as it relates to environmental racism. Take the Atlantic Bridge Pipeline, which is in the public eye for its upcoming Supreme Court case on whether it can transect the hallowed federal Appalachian Trail.

The Fourth Circuit Court of Appeals in Richmond, Virginia recently vacated a Virginia state permit for a compressor station along the pipeline because developer Dominion Energy did not adequately assess its environmental impact on the historic African American host town of Union Hill. The town was founded by free African Americans and formerly enslaved people. The federal courts have also sent other fossil fuel projects and Trump administration oil and gas leases back to the drawing board for their inadequate consideration of environmental and climate impacts.

“Five years ago, Dominion told us that there was going to be a compressor station in Union Hill and there was nothing we could do about it,” Chad Oba, president of a Union Hill coalition protesting the Atlantic Coast Pipeline compressor, said in The Hill. “That’s not fair, and it’s not American. This is a win for a group of citizens who were committed to protecting their community and never ever gave up.”

Such victories give hope that this is one rollback the Trump administration may not ultimately get away with. The assault on NEPA is so sweeping and blatant in its turning control of the environment over to industry, it is sure to receive a massive court challenge from environmental groups and environmental justice advocates. If communities like Union Hill refused to give up, there is no reason for anyone opposed to the rewriting of NEPA to throw in the towel, either. There is still time before the March 10 deadline for public comment.

Recently, Union of Concerned Scientists colleague Adrienne Hollis interviewed Mildred McClain, an environmental justice leader in Savannah, Georgia, about the importance of NEPA. McClain recalled how the act gave her community a voice against the dumping of nuclear waste and unchecked widening of the Savannah River for container ships.

“If it had not been for NEPA,” McClain said, “the community would not have been a part of the process.”

It’s important to recognize that taking communities of color out of the process is a major goal in the administration’s efforts to gut NEPA. When President Trump announced the rewrite, he was — by no small coincidence — flanked by a nearly all-white phalanx of supporters as he claimed with a straight face, “We’re maintaining America’s world-class standards of environmental protection. We have some of the cleanest air and cleanest water on Earth. And for our country, the air is, right now, cleaner than it’s been in 40 years.”

For the past two generations, NEPA has offered a powerful tool for the protection of the nation’s environment. If the Trump administration succeeds in ripping it apart and turning environmental reviews over to industry, we will risk the dirtiest air and water of any developed nation on Earth, cementing this nation as a hotbed of environmental racism.

The deadline for public comments on the proposed changes to NEPA closes this Tuesday. Submit your comment today.