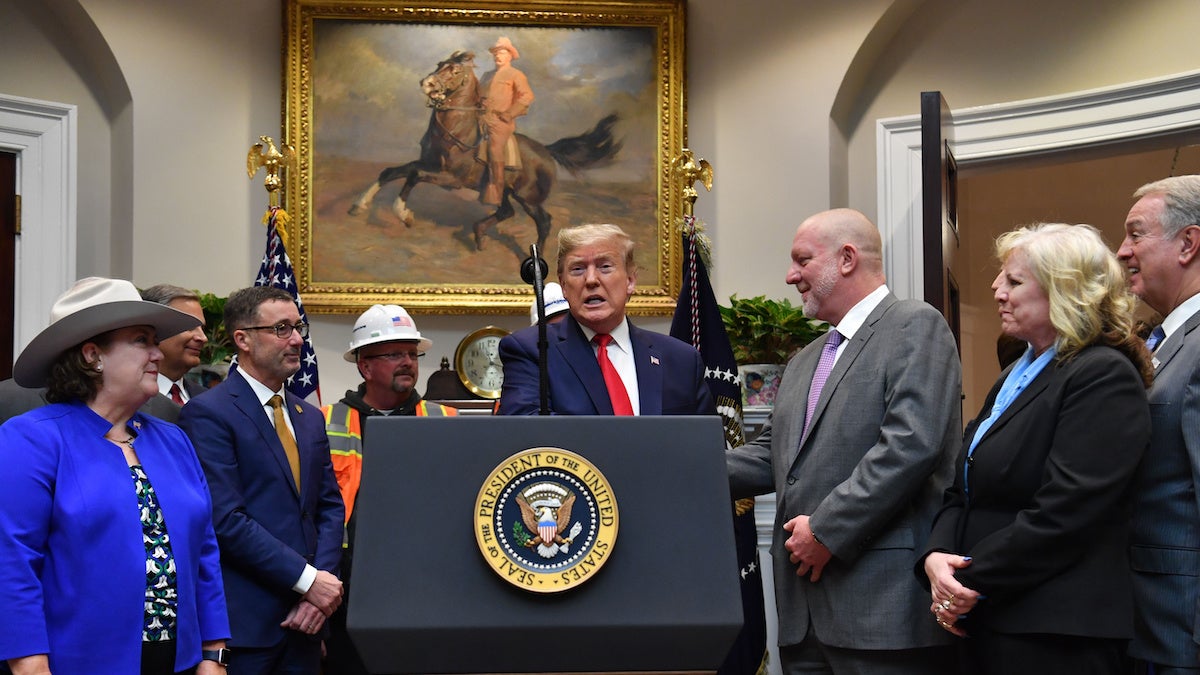 The target of Trump’s latest rollback is the National Environmental Policy Act (NEPA), which was signed into law by Richard Nixon 50 years ago, CNBC explained. It requires the federal government to consider the environmental impacts of major infrastructure projects like pipelines and highways and gives communities a chance to speak up on projects that will impact them. Advocates say its rollback will disproportionately harm low-income communities of color, who tend to be exposed to higher pollution levels.

“The Trump administration’s anti-environment agenda is a racist agenda. Dismantling NEPA is a blatant attempt to silence the working class communities of color who are resisting the expansion of fossil fuel infrastructure into their communities,” Greenpeace senior climate campaigner Lisa Ramsden told CNBC.

NEPA has recently been instrumental in key legal setbacks for controversial energy projects like the Dakota Access and Keystone XL pipelines, NPR pointed out.

Trump announced the rollback, which was first proposed in January, at the UPS Hapeville Airport Hub in Atlanta, Georgia. He recalled being frustrated by the slow pace of the NEPA process as a construction magnate in New York and said the revised regulations would speed the expansion of I-75, a major Georgia thoroughfare for truckers, BBC News reported.

“This is a historical breakthrough that means better roads and highways,” Trump said, as BBC News reported. “We are reclaiming America’s proud heritage as a nation that gets things done.”

Specifically, the administration is making the following changes, as The New York Times reported:

Trump argued that the changes would save hundreds of millions of dollars over almost a decade because they would speed reviews. He has also pushed to loosen regulations to boost the economy in the wake of the coronavirus pandemic. In June, he signed an executive order mandating agencies bypass NEPA in order to expedite certain projects.

But Belinda Archibong, an assistant professor of economics at Barnard College of Columbia University, told The New York Times that simply lifting regulations did not do much to boost the economy.

“Saying ‘We’re going to pull back on regulation’ does not mean that firms are going to start hiring more people. That’s complete nonsense. All that’s going to happen is it’s going to lead to more pollution, period,” Archibong said.

Trump has rolled back 100 environmental rules while in office, and this is one of the largest.

“This may be the single biggest giveaway to polluters in the past 40 years,” Brett Hartl, government affairs director at the Center for Biological Diversity (CBD), said in an email to EcoWatch. “The Trump administration is turning back the clock to when rivers caught fire, our air was unbreathable, and our most beloved wildlife was spiraling toward extinction. The foundational law of the modern environmental movement has been turned into a rubber stamp to enrich for-profit corporations, and we doubt the courts will stand for that.”

While green groups have promised to sue to stop the changes, this may not be necessary. If Trump loses the November election, Congress could reverse the changes with a simple majority and the signature of the new president, CNBC pointed out. Democratic candidate and former Vice President Joe Biden has promised to undo Trump’s environmental rollbacks if elected.