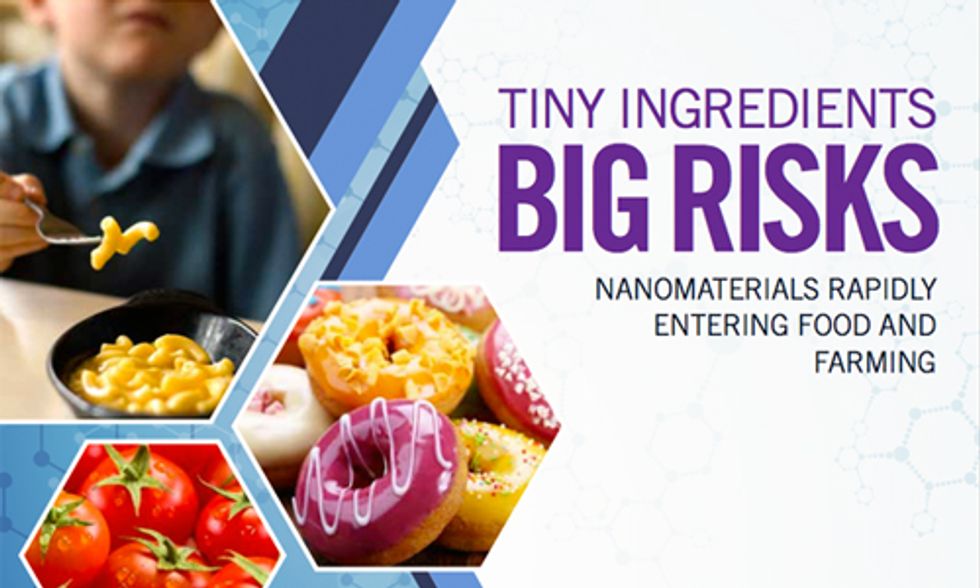 Nanoparticles can be used to deliver vaccines, treat tumours, clean up oil spills, preserve food, protect skin from sun and kill bacteria. They're so useful for purifying, thickening, coloring and keeping food fresh that they're added to more products every year, with the nanofoods market projected to reach US$20.4 billion by 2020. Nanoparticles are the new scientific miracle that will make our lives better! Some people say they'll usher in the next industrial revolution.

Hold on … Haven't we heard that refrain before?

Nanotechnology commonly refers to materials, systems and processes that exist or operate at a scale of 100 nanometres or less, according to U.S.-based Friends of the Earth. A nanometer is a billionth of a meter—about 100,000 times smaller than the diameter of a human hair. An Friends of the Earth report finds use of unlabelled, unregulated nano-ingredients in food has grown substantially since 2008. Because labelling and disclosure are not required for food and beverage products containing them, it's difficult to determine how widespread their use is. Nanoparticles are also used in everything from cutting boards to baby bottles and toys to toothpaste.

Like pesticides, nanoparticles also bioaccumulate. Those that end up in water—from cosmetics, toothpaste, clothing and more—concentrate and become magnified as they move up the food chain.

"Major food companies have rapidly introduced nanomaterials into our food with no labels and scant evidence of their safety, within a regulatory vacuum," says report author Ian Illuminato, Friends of the Earth health and environment campaigner. "Unfortunately, despite a growing body of science calling their safety into question, our government has made little progress in protecting the public, workers and the environment from the big risks posed by these tiny ingredients."

Studies show nanoparticles can harm human health and the environment. They can damage lungs and cause symptoms such as rashes and nasal congestion, and we don't yet know about long-term effects. Their minute size means they're "more likely than larger particles to enter cells, tissues and organs" and "can be more chemically reactive and more bioactive than larger particles of the same chemicals," Friends of the Earth says. A Cornell University study found nanoparticle exposure changed the structure of intestinal-wall lining in chickens.

Like pesticides, they also bioaccumulate. Those that end up in water—from cosmetics, toothpaste, clothing and more—concentrate and become magnified as they move up the food chain. And in one experiment, silver nanoparticles in wastewater runoff killed a third of exposed plants and microbes, according to a CBC online article.

Their use as antibacterial agents also raises concerns about bacterial resistance and the spread of superbugs, which already kill tens of thousands of people every year.

The Wilson Center, an independent research institution in Washington, D.C., recently created a database of "manufacturer-identified" nanoparticle-containing consumer products. It lists 1,628, of which 383 use silver particles. The second most common is titanium, found in 179 products. While acknowledging that "nanotechnologies offer tremendous potential benefits" the Center set up its Project on Emerging Nanotechnologies to "ensure that as these technologies are developed, potential human health and environmental risks are anticipated, properly understood, and effectively managed."

As is often the case with such discoveries, widespread application could lead to unintended consequences. Scientists argue we should follow the precautionary principle, which states proponents must prove products or materials are safe before they're put into common use. Before letting loose such technology, we should also ask who benefits, whether it's necessary and what environmental consequences are possible.

Friends of the Earth has called on the U.S. government to impose a moratorium on "further commercial release of food products, food packaging, food contact materials and agrochemicals that contain manufactured nanomaterials until nanotechnology-specific safety laws are established and the public is involved in decision-making."

The group says we can protect ourselves by choosing fresh, organic and local foods instead of processed and packaged foods and by holding governments accountable for regulating and labelling products with nanoparticles.

Nanomaterials may well turn out to be a boon to humans, but we don't know enough about their long-term effects to be adding them so indiscriminately to our food systems and other products. If we've learned anything from past experience, it's that although we can speculate about the benefits of new technologies, reality doesn't always match speculation, and a lack of knowledge can lead to nasty surprises down the road.