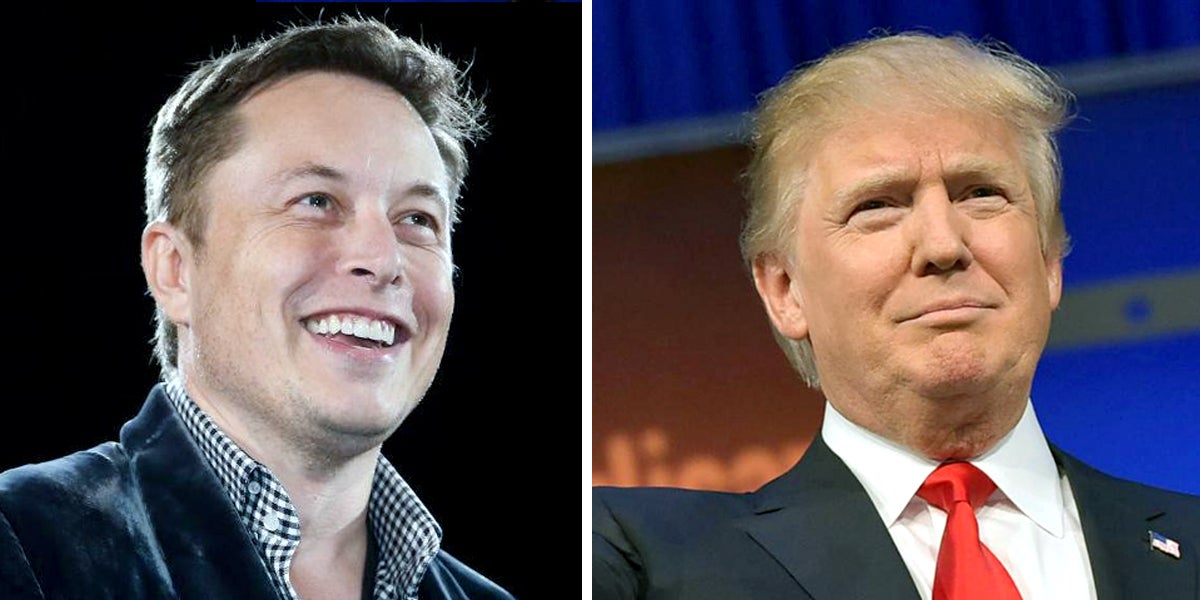 Even though Elon Musk once said that Donald Trump “doesn’t seem to have the sort of character that reflects well on the United States,” the Tesla/SpaceX CEO is joining the president-elect’s Strategic and Policy Forum, an advisory board for the president on business issues.

“My Administration is going to work together with the private sector to improve the business climate and make it attractive for firms to create new jobs across the United States from Silicon Valley to the heartland,” Trump said in a statement announcing the latest appointees.

Other high-profile CEOs on the 19-member Strategic and Policy Forum include Mary Barra of General Motors, Jamie Dimon of JPMorgan Chase & Co, Bob Iger of The Walt Disney Company, among others. The forum will be chaired by Stephen A. Schwarzman, who heads the investment firm Blackstone.

Members of the group will “be called upon to meet with the president frequently to share their specific experience and knowledge as the president implements his economic agenda,” a media release explained.

Musk’s willingness to take part in Trump’s forthcoming administration—one that’s filled with climate change deniers and fossil fuel barons, at that—is admittedly a head-scratcher. Similar questions were raised when Leonardo DiCaprio and Al Gore met with Trump and his daughter Ivanka. The Tesla boss is very outspoken on climate change issues and has built a renewable energy enterprise.

Musk is also a big proponent of a carbon tax to drive investments in clean tech. We have to “remove the effective subsidy of not pricing the damage done by carbon pollution,” he said last year. Also, in an appearance in DiCaprio’s climate change documentary Before The Flood, Musk said, “If governments can set the rules in favor of sustainable energy, then we can get there really quickly … Only way to do that is through a carbon tax.”

Trump, in contrast, famously believes that global warming is a hoax created by and for the Chinese. The hotelier has waged wars on windmills, calling them bird killers and a blight on the view of his luxury golf courses. As for solar, Trump said the booming sector is “so expensive” and “not working so good.”

The president-elect also campaigned on slashing taxes across the board, axing President Obama’s emissions regulations and exiting the historic 2015 Paris climate agreement.

However, a report from Recode suggests that Musk might use his clout to push for green initiatives. As Recode reporter April Glaser writes:

“Still, it’s probably in Musk’s favor to work with the incoming administration, especially as it starts to shape new policies that are dear to Musk’s heart, like regulations to bring self-driving cars to U.S. roadways and whether to abide by the 2015 Paris climate agreement or pull out, a threat Trump made on the campaign trail.

“That doesn’t sit well with Musk, who will likely urge the Trump administration to remain a signatory on the international climate accord. Reps for Musk did not immediately respond to request for comment.”

Additionally, as Glaser notes, “Musk might be able to persuade the president-elect not to renege on the Paris agreement, which already lacks strong mechanisms for enforcement.”

Glaser points out that secretary of state nominee/Exxon CEO Rex Tillerson—whose company announced its support of the Paris climate agreement and acknowledges the risks of climate change—also endorsed the idea of a national carbon tax.

But as the New York Times argues, Tillerson might only support the Paris agreement and a carbon tax if it does not harm his company’s bottom line.

“Will Mr. Tillerson try to persuade Mr. Trump to support the international climate accord reached in Paris? He might, but he would probably stress the importance of natural gas and methods to bury carbon emissions—policies that would not hurt fossil fuel industries,” the newspaper of record writes.

“I’m here to help you folks do well, and you’re doing well right now and I’m very honored by ‘the bounce’—they’re all talking about ‘the bounce’ and I know everybody in this room has to like me a little bit, but we’re going to try and have that bounce continue,” Trump said at the summit. “Perhaps even more importantly we want you to keep going with the incredible innovation. There’s nobody like you in the world. There’s nobody like the people in this room.”