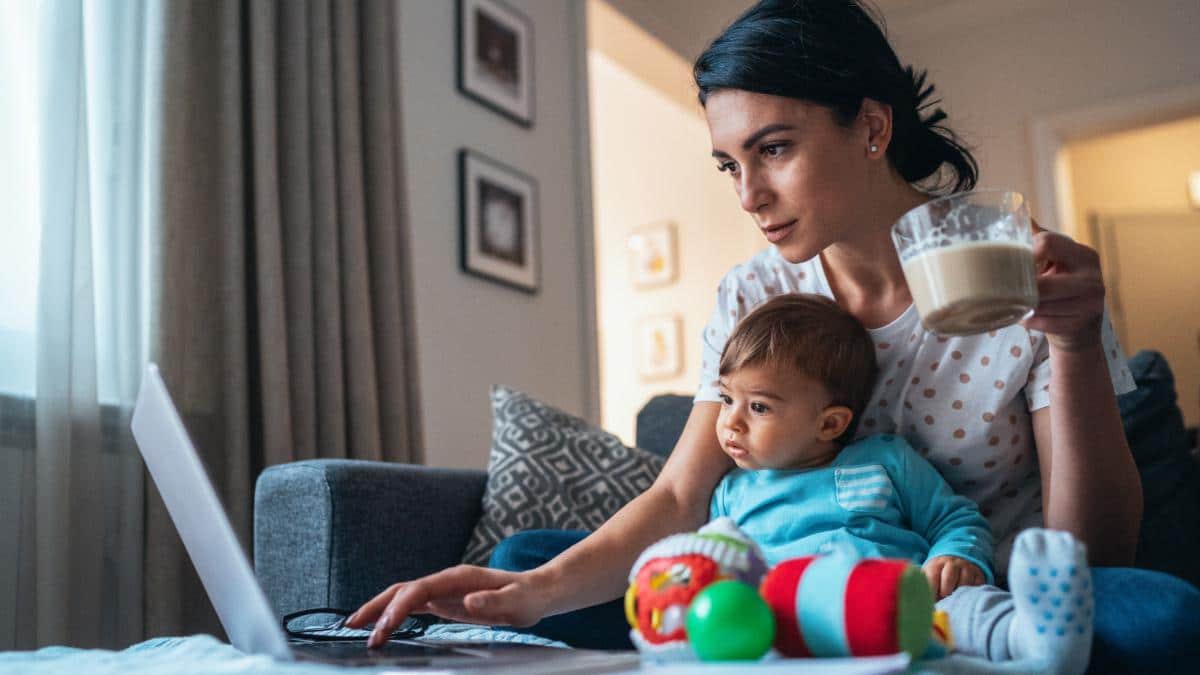 Australians are eating and inhaling significant numbers of tiny plastics at home, our new research shows.

These “microplastics,” which are derived from petrochemicals extracted from oil and gas products, are settling in dust around the house.

Some of these particles are toxic to humans — they can carry carcinogenic or mutagenic chemicals, meaning they potentially cause cancer and/or damage our DNA.

We still don’t know the true impact of these microplastics on human health. But the good news is, having hard floors, using more natural fibers in clothing, furnishings and homewares, along with vacuuming at least weekly can reduce your exposure.

Microplastics are plastic particles less than five millimeters across. They come from a range of household and everyday items such as the clothes we wear, home furnishings, and food and beverage packaging.

We know microplastics are pervasive outdoors, reaching remote and inaccessible locations such as the Arctic, the Mariana Trench (the world’s deepest ocean trench), and the Italian Alps.

Our study demonstrates it’s an inescapable reality that we’re living in a sea of microplastics — they’re in our food and drinks, our oceans, and our homes.

What We Did and What We Found

While research has focused mainly on microplastics in the natural environment, a handful of studies have looked at how much we’re exposed to indoors.

People spend up to 90% of their time indoors and therefore the greatest risk of exposure to microplastics is in the home.

Our study is the first to examine how much microplastic we’re exposed to in Australian homes. We analyzed dust deposited from indoor air in 32 homes across Sydney over a one-month period in 2019.

We asked members of the public to collect dust in specially prepared glass dishes, which we then analyzed. 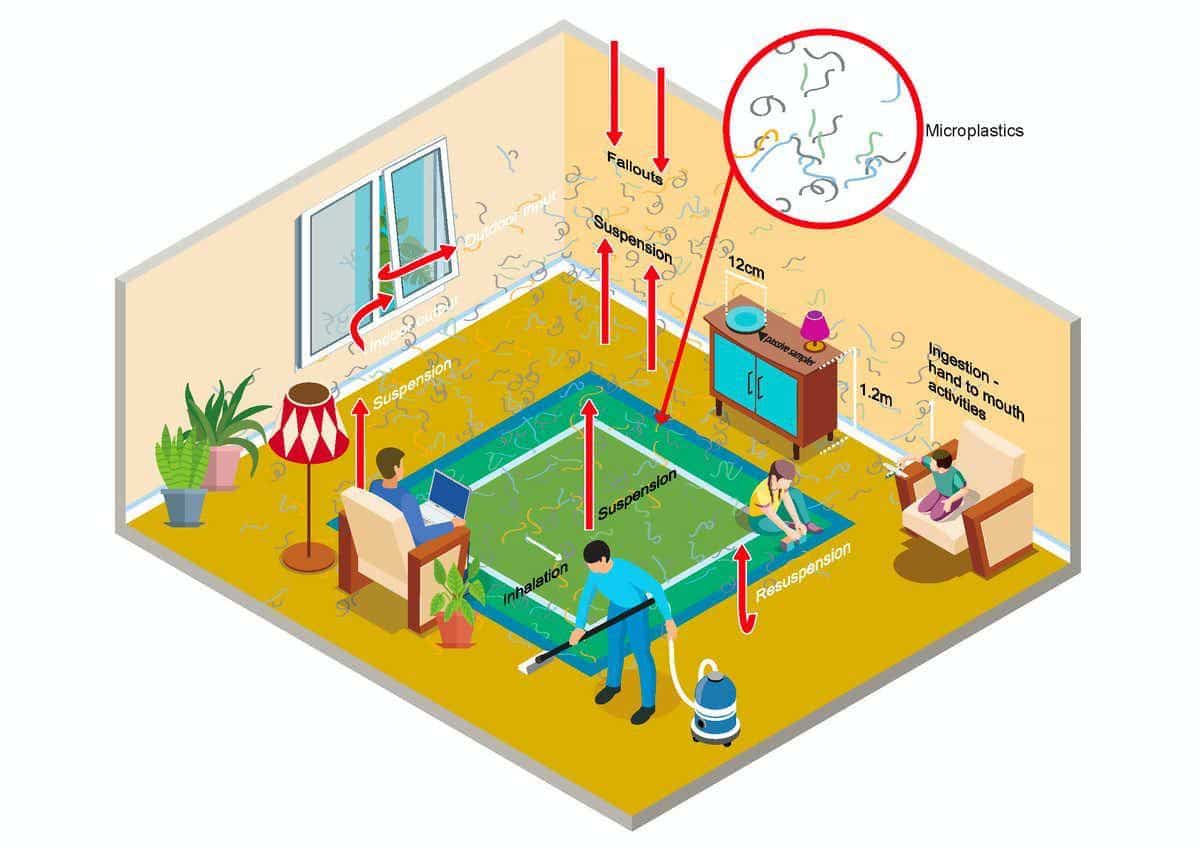 Here’s how microplastics can be generated, suspended, ingested and inhaled inside a house. Monique Chilton

We found 39% of the deposited dust particles were microplastics; 42% were natural fibers such as cotton, hair and wool; and 18% were transformed natural-based fibers such as viscose and cellophane. The remaining 1% were film and fragments consisting of various materials.

Between 22 and 6,169 microfibers were deposited as dust per square meter, each day.

Homes with carpet as the main floor covering had nearly double the number of petrochemical-based fibers (including polyethylene, polyamide and polyacrylic) than homes without carpeted floors.

Conversely, polyvinyl fibers (synthetic fibers made of vinyl chloride) were two times more prevalent in homes without carpet. This is because the coating applied to hard flooring degrades over time, producing polyvinyl fibers in house dust.

Microplastics Can Be Toxic

Microplastics can carry a range of contaminants such as trace metals and some potentially harmful organic chemicals.

These chemicals can leach from the plastic surface once in the body, increasing the potential for toxic effects. Microplastics can have carcinogenic properties, meaning they potentially cause cancer. They can also be mutagenic, meaning they can damage DNA.

However, even though some of the microplastics measured in our study are composed of potentially carcinogenic and/or mutagenic compounds, the actual risk to human health is unclear.

Given the pervasiveness of microplastics not only in homes but in food and beverages, the crucial next step in this research area is to establish what, if any, are safe levels of exposure.

How Much Are We Exposed To? And Can This Be Minimized?

Roughly a quarter of all of the fibers we recorded were less than 250 micrometers in size, meaning they can be inhaled. This means we can be internally exposed to these microplastics and any contaminants attached to them.

Using human exposure models, we calculated that inhalation and ingestion rates were greatest in children under six years old. This is due to their lower relative body weight, smaller size, and higher breathing rate than adults. What’s more, young children typically have more contact with the floor, and tend to put their hands in their mouths more often than adults.

For a five-year-old, this would be equivalent to eating a garden pea’s worth of microplastics over the course of a year. But for many of these plastics there is no established safe level of exposure.

Our study indicated there are effective ways to minimize exposure.

First is the choice of flooring, with hard surfaces, including polished wood floors, likely to have fewer microplastics than carpeted floors.

Also, how often you clean makes a difference. Vacuuming floors at least weekly was associated with less microplastics in dust than those that were less frequently cleaned. So get cleaning!

Disclosure statement: Mark Patrick Taylor received research support for this project via an Australian Government Citizen Science Grant, CSG55984, ‘Citizen insights to the composition and risks of household dust’ (the DustSafe project). Participant questionnaires for collecting meta-data were approved by Macquarie University’s ethics panel, project ID 2446. Cochlear Sydney provided access to their Nicolet iN10-MX FTIR instrument to undertake the research. Neda Sharifi Soltani receives funding from the Australian Government as a Research Training Program (RTP) scholarship no.2017678. Scott Wilson receives funding from the Total Environment Centre and NSW EPA to conduct research on microplastics in the environment. He is the Research Director of the Australian Microplastic Assessment Project (AUSMAP), which is a citizen science focussed program.