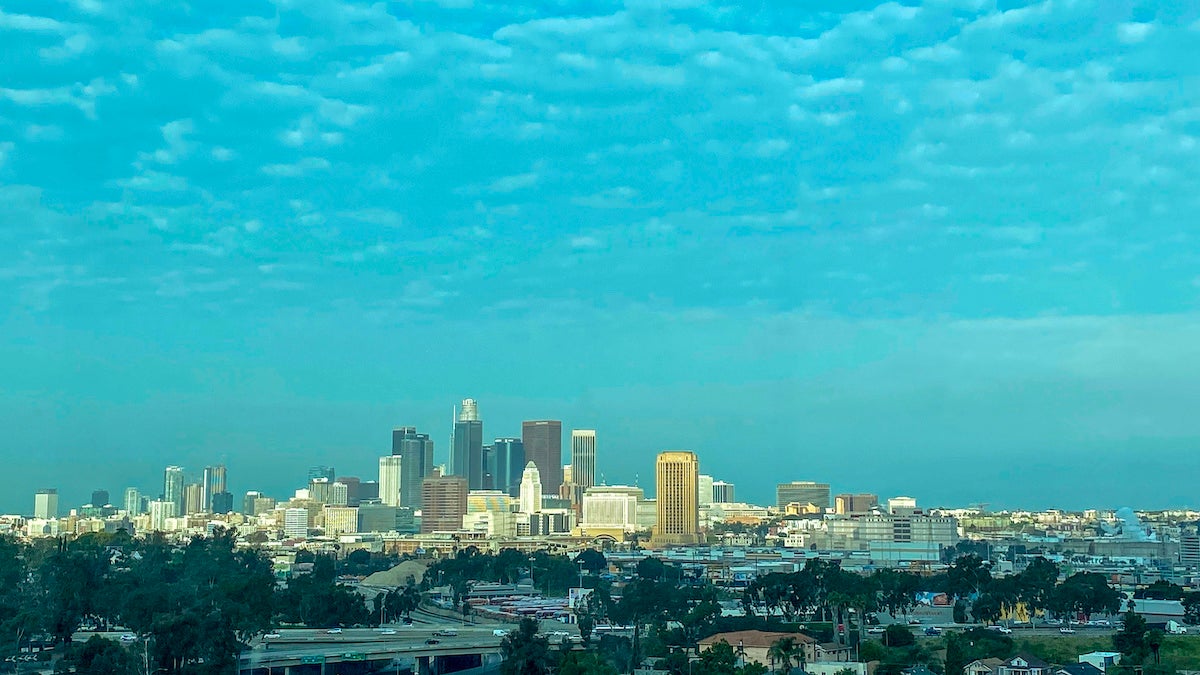 View of downtown Los Angeles, California amid the coronavirus pandemic on April 21, 2020. According to IQAir, a Swiss air quality technology company, Los Angeles on that day saw some of the cleanest air of any major city in the world. VALERIE MACON / AFP via Getty Images

The Paris-based agency predicted a drop of eight percent, almost six times the last record, set in 2009 and triggered by the global financial crisis. It is also twice as steep as all emissions declines since World War II combined. However, the agency cautioned that this decline on its own is not a solution to the climate crisis.

“Resulting from premature deaths and economic trauma around the world, the historic decline in global emissions is absolutely nothing to cheer,” IEA Executive Director Dr Fatih Birol said in a press release. “And if the aftermath of the 2008 financial crisis is anything to go by, we are likely to soon see a sharp rebound in emissions as economic conditions improve.”

Global CO2 emissions are set to fall nearly 8% this year to their lowest level since 2010, the largest drop in history.

But this fall, on the back of premature deaths & economic trauma, is nothing to cheer. The 🌍 needs structural emissions reductions driven by better policies. pic.twitter.com/kk9UONUGkN

Birol did note, however, that a rebound in emissions is not inevitable, as he added his voice to the growing global call for a green recovery process.

“[G]overnments can learn from [the post-2008] experience by putting clean energy technologies – renewables, efficiency, batteries, hydrogen and carbon capture – at the heart of their plans for economic recovery,” he said. “Investing in those areas can create jobs, make economies more competitive and steer the world towards a more resilient and cleaner energy future.”

The IEA’s Global Energy Review is based on more than 100 days of data so far this year. It predicts that global energy demand will fall by six percent in 2020, the equivalent of losing the entire energy demand of India and seven times the 2008 decline.

The #Covid19 pandemic is the biggest shock to the global energy system in over 70 years.

Global energy demand is set to fall 6% in 2020, seven times greater than the drop in the wake of the 2009 crisis.@IEA’s new Global Energy Review has more → https://t.co/ZwBiCJU5Wz

All major fossil fuels have taken a beating so far and are expected to decline further.

Only renewable energy sources saw growth, and are expected to continue to grow throughout the year. This is because wind turbines and solar panels cost little to operate, so when electricity demand declines, they get priority on the grid, The New York Times explained.

This means low carbon energy sources are expected to continue moving in the direction that began in 2019, when they overtook coal as the world’s leading source of electricity for the first time in 50 years. By the end of 2020, they should account for 40 percent of the world’s electricity.

“This is a historic shock to the entire energy world. Amid today’s unparalleled health and economic crises, the plunge in demand for nearly all major fuels is staggering, especially for coal, oil and gas. Only renewables are holding up during the previously unheard-of slump in electricity use,” Birol said. “It is still too early to determine the longer-term impacts, but the energy industry that emerges from this crisis will be significantly different from the one that came before.”

The IEA estimates are based on certain assumptions, namely that lockdown measures are loosened in the coming months and the economy begins to recover.

“Some countries may delay the lifting of the lockdown, or a second wave of coronavirus could render our current expectations on the optimistic side,” Birol told Reuters.

The question for climate advocates is whether the decline in emissions can be sustained. This is a tall order. The United Nations has estimated that emissions need to decline by around eight percent per year through 2030 in order to keep temperatures “well below” two degrees Celsius above pre industrial levels, The New York Times reported.

However, the declines in air pollution that have accompanied the lockdowns may provide an effective argument for cleaner energy.

“I hope the striking improvements in air quality we’ve seen remind us what things could be like if we shifted to green power and electric vehicles,” Stanford University earth scientist Rob Jackson told The New York Times.