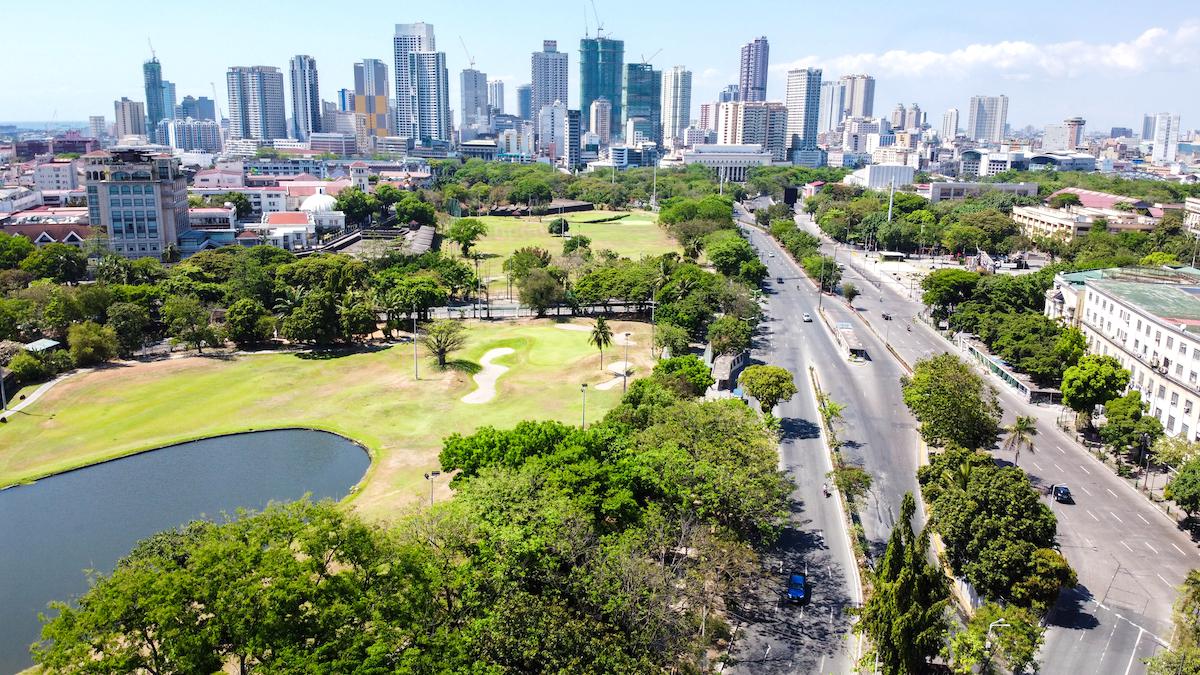 Lockdowns due to the COVID-19 outbreak have resulted in measured improvements in air quality in cities such as Manila, the Philippines, seen here by drone on April 5, 2020. Herman Lumanog / Pacific Press / LightRocket via Getty Images

Carbon dioxide emissions in 2020 fell by 7%, the biggest drop ever, as countries around the world imposed lockdowns and restrictions on movement to curb the spread of the coronavirus pandemic, the Global Carbon Project said in its annual assessment on Friday.

Researchers say the emissions are down mainly because more people stayed home and traveled less by car or plane this year.

Transport accounted for the largest share of the global decrease in emission of carbon dioxide, the chief man-made greenhouse gas.

Emissions from road transport fell by roughly half in April when the first wave of the coronavirus was at its peak. By December, it had fallen 10% year-on-year.

Emissions from aviation were down by 40% this year.

Industrial activity, which accounted for 22% of the global total, was down by 30% in some countries due to strict lockdown measures.

The U.S. and the European Union saw the most pronounced emissions reduction, down 12% and 11% respectively. China, however, saw its emissions drop just 1.7% as the country powered up its economic recovery.

Also, China had an earlier lockdown with less of a second wave, said study co-author Corinne LeQuere, a climate scientist at the University of East Anglia. China’s emissions are more industrial-based than other countries and its industry was less affected than transportation, she said.

Under the Paris climate accord, signed five years ago, emissions cuts of 1 to 2 billion metric tons annually this decade are needed to limit the global temperature from rising well below 2 degrees Celsius.

Since the 2015 accord, emissions have grown each year. The UN says they must fall 7.6% annually by 2030 to reach the more ambitious temperature limit of 1.5 degrees Celsius.

Lockdown Not a Solution

“Of course, lockdown is absolutely not the way to tackle climate change,” LeQuere said.

Experts have warned that emissions may rebound after the pandemic ends, although it is still too early to say how fast they would jump back up.

Long-term emission trends would depend on how countries power their economic recovery post-pandemic.

“All elements are not yet in place for sustained decreases in global emissions, and emissions are slowly edging back to 2019 levels,” LeQuere said.

Without the pandemic, the carbon footprint of big emitters such as China would have continued to grow in 2020, said Philippe Ciais, a researcher at France’s Laboratory of Climate and Environment Sciences.

“It’s a temporary respite,” he said. “The way to mitigate climate change is not to stop activity but rather to speed up the transition to low-carbon energy.”

Ciais added that 2020’s emissions fall has not translated into a reduction in the levels of carbon pollution in Earth’s atmosphere.

Chris Field, director of the Stanford Woods Institute for the Environment, is more optimistic about the future.

While he too believes that emissions will increase after the pandemic, he is confident that people have become more environmentally conscious.

“I am optimistic that we have, as a society, learned some lessons that may help decrease emissions in the future,” Field said.

“For example, as people get good at telecommuting a couple of days a week or realize they don’t need quite so many business trips, we might see behavior-related future emissions decreases,” he added.