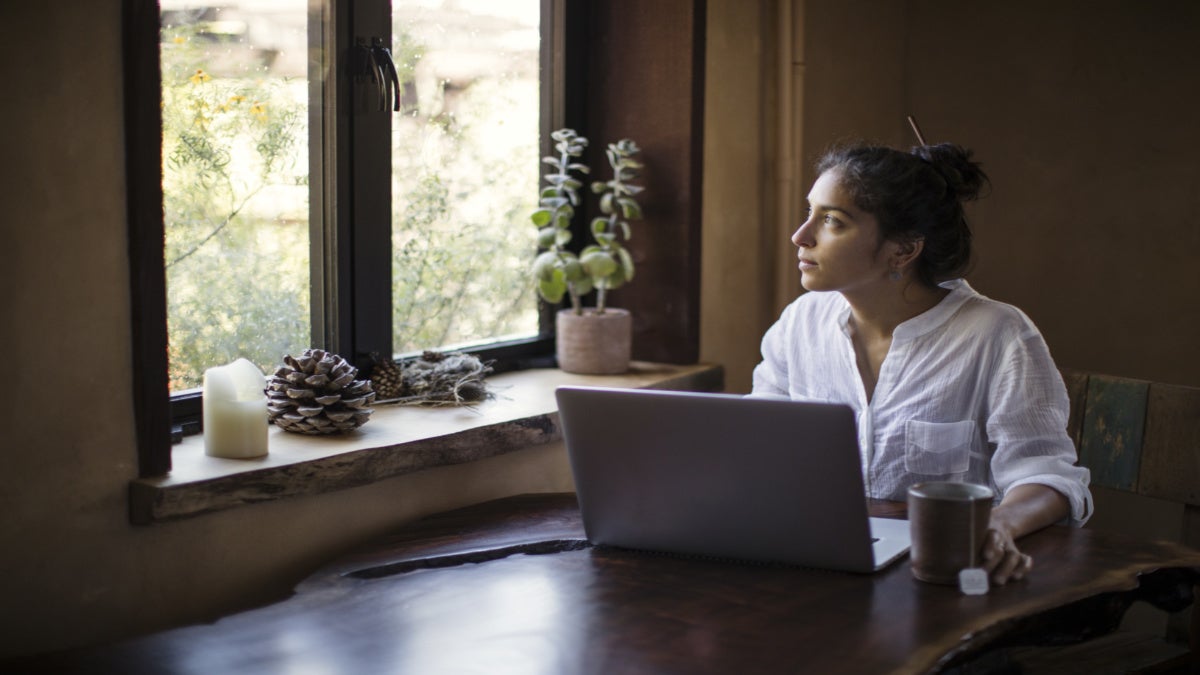 A woman takes a break to look outside while working from home on a laptop computer. Justin Lewis / Getty Images

The millions of Americans who are skipping their morning commute and working from home because of the coronavirus have drastically reduced smog over America’s largest cities and otherwise benefited the environment. Yet the growing ranks of workers now plying their trade online using tools like Zoom and Slack are taking their own toll.

Environmentalists note that the technological infrastructure that supports our online video watching, searching and music playing leaves a large carbon footprint of its own. By some estimates, data centers and the networks that connect them produce as much carbon pollution as the aviation industry— or about 2% of the world’s total.

On one hand, the massive drop in car traffic from staying-in-place orders across the country is “a slam-dunk” environmentally, said Eric Masanet, a professor of sustainability sciences at the University of California at Santa Barbara. But the relatively lower impact of Netflix binging and many other digital activities doesn’t mean we’re in the clear.

How Dirty Is the Cloud?

Indeed, the digital domain is hardly emissions-free. Manufacturing a smartphone, tablet or computer as well as the network that supports them consumes considerable resources — everything from mining rare minerals to laying undersea cables for high-speed internet. And of course it takes oodles of electricity to power the whole system. Electricity in the U.S. still comes overwhelmingly from generators powered by fossil fuels, not wind or solar.

“When we’re using our cars, we see that we’re using gas … But when you use a computer or a smartphone, it is not so obvious that it’s also responsible for greenhouse gas emissions,” Hugues Ferreboeuf, project director at the Shift Project, a Paris-based think tank, recently told CBS News.

The Shift Project issued an alarming report last year that found digital technologies’ energy demand was growing at an unsustainable rate. “The only chance to keep the [global] temperature increase to 2 degrees is to divide by two the greenhouse gas emissions in the next 10 years,” Ferreboeuf said. “If we want to change things, there is no alternative to us reviewing the way we use digital.”

The silver lining is that, at least for now, the energy impact of cloud computing remains relatively modest. Over the past decade, data centers — often called the “brains” of the digital world — have massively increased the amount of information they process while increasing energy use only a little. Since 2010, such data crunching has jumped more than fivefold, while energy use rose only about 6%, according to a paper published this year in Science.

“We’re consuming much more data than we used to for not that much more energy,” said Masanet, the paper’s lead author.

Here’s why: Data center operators have become much better at heating and cooling their massive buildings, essentially limiting or even eliminating a function that hogged more energy than running the servers themselves. The trend toward larger centers and better servers over the last decade, led by cloud-computing giants like Amazon, Apple, Facebook and Microsoft, has also helped lower the energy-to-data ratio.

Still, that increase in energy efficiency is unlikely to continue forever.

“The old data centers were kind of like old refrigerators when you didn’t put the door on,” said Arman Shehabi, a coauthor of the paper and research scientist at the Lawrence Berkeley National Laboratory. “Now they put the doors on and it’s more efficient. But once they all have doors, you’re going to need something new” to keep energy use under control, he said.

Shehabi and Masanet each estimated that we can go another five years without increasing data centers’ energy demands. But to keep their energy use from exploding thereafter, governments need to make policy changes — today.

“The industry, policymakers, data center operators, they all have to confront the wave of demand that’s coming,” Masanet said.

In particular, technologies including artificial intelligence, 5G, virtual reality and augmented reality are all energy-intensive, and usage is expected to surge in the years to come.

Mitigating that energy consumption goes beyond making sure that data centers use the least amount of power possible — it also requires better and wider use of renewable energy.

In Europe, where governments are aggressively trying to reduce their carbon emissions, much more electricity is carbon-free than in the U.S., noted Jacqueline Wernimont, distinguished chair in digital humanities and social engagement at Dartmouth College.

Wernimont also pointed out that data centers’ environmental impact goes beyond carbon emissions. Most emit a constant low hum, creating noise pollution that affects humans and animals. When they are sited near population centers, they tend to be placed in poor neighborhoods (like power plants, landfills and other undesirable infrastructure), to the detriment of the people who live there.

Who Pays for Digital?

So has the coronavirus lockdown in the U.S. decreased carbon emissions overall? Scientists are currently exploring that question, and it will likely be months before they can come up with a definitive answer. Yet Masanet has a strong hunch the answer is “yes” — even taking into account the rise in binge streaming.