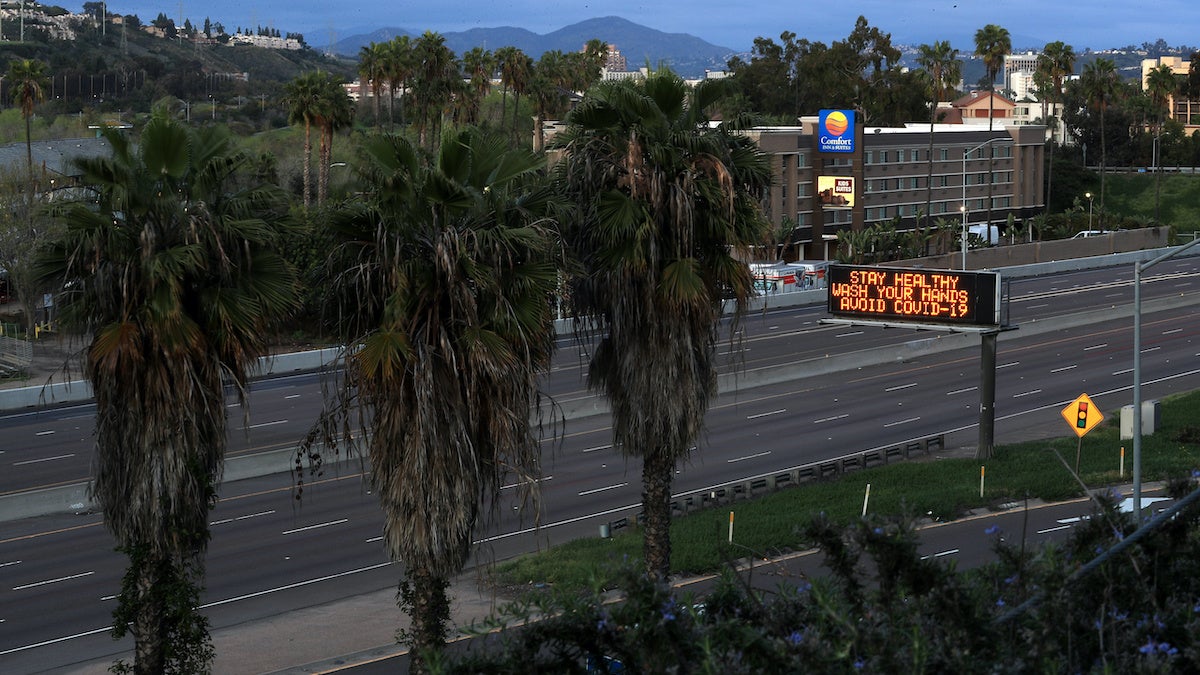 A stretch of Interstate 8 is empty on March 15, 2020 in San Diego, California. The CDC called for the cancellation of events of 50 or more people for eight weeks to attempt to prevent the spread of coronavirus. Sean M. Haffey / Getty Images

As schools close, as workers are asked to stay home, and as concerts and sports events are put on hold in an attempt to slow the spread of the novel coronavirus that the World Health Organization has declared a pandemic, the practice of social distancing is having a collateral benefit — it’s slowing the climate crisis.

Kimberly Nicholas, a researcher at the Lund University Center for Sustainability Studies in Sweden, told The New York Times that three common activities account for the largest sources of our carbon emissions. “Any time you can avoid getting on a plane, getting in a car or eating animal products, that’s a substantial climate savings.” Thanks to social distancing and travel restrictions, many people are not flying and have drastically reduced how much time they spend in cars.

Nichols authored a 2018 study about actions people can take to reduce emissions and is writing a book on the subject.

As E&E News pointed out, the rapidly spreading virus has caused massive dips in industrial activity and demand for oil. Experts estimate that carbon emissions have fallen by nearly one-fourth in China, which is the world’s largest carbon emitter.

There is a complex and intertwined relationship between responses to emergencies and carbon emissions. “Pull one string here, and it affects everything else,” said Christopher Jones, a climate policy expert at the University of California, Berkeley, and lead developer at the CoolClimate Network, a research consortium focused on tools to reduce carbon emissions, to E&E News. “With the economy and carbon footprints, they’re so interrelated that you really quickly start to have all these complex interactions.

First, there have been massive reductions in transportation-related carbon emissions.

“For average Americans, the biggest source of greenhouse gas emissions is driving,” said Nichols to The New York Times. Whenever we reduce driving, it “has a big impact on our climate pollution.”

A larger impact is felt when we stop flying. Fewer airplanes in the sky dramatically reduces the amount of greenhouse gas emissions people create. In fact, it takes eight years of recycling to offset the carbon emissions from one round-trip New York to London flight, according to The New York Times.

As Al Jazeera noted, with more nations going into lockdown, demand for air travel, oil and electricity could continue to drop. Concentrations of nitrogen dioxide, a pollutant that is released when fossil fuels are burned, have decreased some 40 percent in China.

Jones from the CoolClimate Network at UC Berkeley said the increase in people dining at home has not produced a clear effect on carbon emissions, according to The New York Times. And whether we eat out or at home, we tend to waste 25 percent of the food we buy.

However, Nichols said that what we eat matters much more than where, since eating beef has a huge carbon footprint, considering how resource-intensive cattle farming is. Therefore, if you stockpiled beans and rice, you can lower your carbon footprint by working your way through them, as The New York Times suggested.

Working from home means you need to create a comfortable environment. If people are blasting the heat, so they’re comfortable in shorts and a t-shirt, then it won’t matter that they are not commuting — they will still produce greenhouse gases, according to The New York Times.

Finally, The New York Times discussed shopping from home, which can have a positive impact if you are patient and not demanding rushed delivery. Ordering groceries online allows for efficient packing and logically organized delivery routes.

Unfortunately, the lasting effects of the current reduction in greenhouse gas emissions are doubtful. The virus will pass and industry will ramp up again. People will continue to fly for vacations and sit in traffic as they wait to park at a concert or ball game.

Gernot Wagner, a clinical associate professor at New York University’s Department of Environmental Studies, told MIT Technology Review: “Emissions in China are down because the economy has stopped and people are dying, and because poor people are not able to get medicine and food. This is not an analogy for how we want to decrease emissions from climate change.”

Furthermore, Helen Mountford of the World Resources Institute told POLITICO that post-recession economies can see a surge in emissions: “After the global financial crisis of 2008, for example, global CO2 emissions from fossil fuel combustion and cement production grew 5.9 percent in 2010, more than offsetting the 1.4 percent decrease in 2009.”