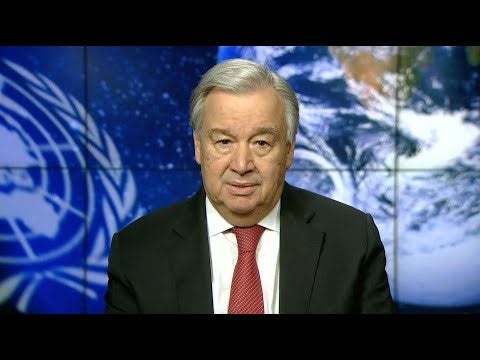 In a special message for the 50th anniversary of Earth Day Wednesday, UN Secretary-General António Guterres called on the world to respond to the immediate crisis caused by the new coronavirus in a way that also solves the climate crisis.

Guterres first acknowledged the pandemic that has prompted Earth Day to go digital this year, calling it “the biggest test the world has faced since the Second World War.”

“The impact of the coronavirus is both immediate and dreadful,” he said. “But there is another, deep emergency — the planet’s unfolding environmental crisis.”

The #COVID19 crisis is an unprecedented wake-up call.

We need to turn the recovery into a real opportunity to build a better future.

On this #EarthDay, join me in demanding a healthy and resilient future for people & planet. pic.twitter.com/tVvTpiRrEf

Guterres then called on countries to make sure their coronavirus recovery plans also paved the way for a more sustainable way of life.

“The current crisis is an unprecedented wake-up call,” he said. “We need to turn the recovery into a real opportunity to do things right for the future.”

To that end, he proposed six steps for a green recovery:

“On this Earth Day, please join me in demanding a healthy and resilient future for people and planet alike,” Guterres concluded.

The remarks are in keeping with Guterres’ commitment to climate action, which has been his No. 1 priority since assuming UN leadership in January 2017, as Reuters reported. However, POLITICO interpreted his remarks as a direct challenge to President Donald Trump and said they showed a new willingness on the UN leader’s part to confront the U.S. president who last week suspended funding to the World Health Organization.

In particular, Guterres’ call for an end to fossil fuel subsidies goes against Trump’s promise Tuesday to bail out the oil industry after oil prices fell below zero for the first time Monday. The U.S. also gives out the second-most subsidies to the fossil fuel industry, after China, according to the International Monetary Fund.

Further, Guterres’ call for a green recovery echoes the demands of some Democratic lawmakers, who had pushed unsuccessfully to condition an airline bailout on reduced emissions, as Grist reported.

But Guterres’ statement also intervenes in a global fight over what the recovery from the coronavirus will look like. So far, major stimulus plans in the U.S., China and Europe have focused on mitigating immediate economic damage, Reuters pointed out. But there are signs that some countries at least could incorporate green measures into future efforts. Austrian environment minister Leonore Gewessler said last week that an airline bailout should be conditional on climate policies such as fewer short-haul flights and the use of cleaner jet fuel.

In the U.S., a group of activists and experts has put forward a call for a Green Stimulus that urges investments in green jobs and projects alongside efforts to reduce greenhouse gas emissions so as to limit global warming to around 1.5 degrees Celsius above pre-industrial levels.

Emissions have declined as people stay home in response to lockdown orders, but experts say they will only stay down if environmental concerns are incorporated into recovery plans. Further, they point out that protecting the environment reduces the risk of future pandemics.

“While the pandemic will lead to a temporary dip in global greenhouse gas emissions, this must not distract from the urgent need for rapid fundamental changes in infrastructure, energy, land use and industrial systems to set us on a path to net zero emissions globally by 2050 at the latest,” International Institute for Environment and Development (IIED) Director Andrew Norton told BBC News. “Land use change and deforestation are primary global drivers of biodiversity destruction. They heighten the risk of further pandemics by bringing humans into contact with new threats such as the coronavirus. Every species lost is an irreversible event that decreases the resilience of natural and human systems on a permanent basis.”