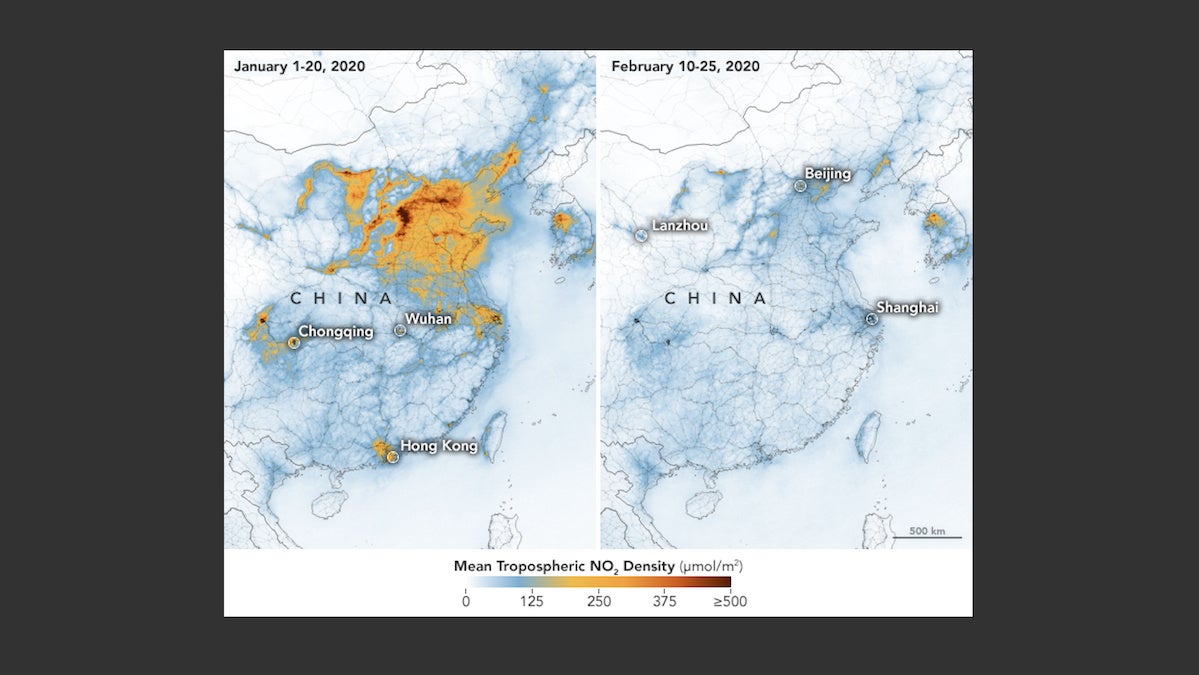 Toxic pollution levels fell significantly in China between January and February, and scientists think the new coronavirus is a large part of the reason why.

Satellite data collected by the National Aeronautics and Space Administration (NASA) and the European Space Agency (ESA) and shared by NASA’s Earth Observatory Monday show a steep decline in nitrogen dioxide levels over China between Jan. 1 to 20 and Feb. 10 to 25. The two periods coincide with the time before and after Chinese officials implemented a quarantine in Wuhan, the epicenter of the COVID-19 outbreak.

“This is the first time I have seen such a dramatic drop-off over such a wide area for a specific event,” air quality researcher at NASA’s Goddard Space Flight Center Fei Liu said in the NASA post.

Nitrogen dioxide is a noxious gas emitted by cars, power plants and factories. Short term exposure can aggravate the symptoms of asthma, and longer term exposure can cause people to develop asthma and be more vulnerable to respiratory infections, according to the U.S. Environmental Protection Agency. The decline in emissions over China came after Jan. 23, by which point transit in and out of Wuhan had been halted and local businesses had been shuttered, NASA said. The decline in pollution levels began over Wuhan and then spread across the country.

Nitrogen dioxide levels have fallen before, but never so steeply and widely, Liu said. They fell gradually in several countries after the 2008 recession, and temporarily in Beijing during the 2008 Olympics.

Scientists also usually observe a decline in Chinese pollution levels at the end of January and beginning of February, when businesses and factories close for the Lunar New Year. However, the pollution levels usually rise again when the celebration is over, but this year, they have not.

“This year, the reduction rate is more significant than in past years and it has lasted longer,” Liu said. “I am not surprised because many cities nationwide have taken measures to minimize spread of the virus.”

Further images shared by NASA show how 2020’s pollution levels did not rise after the holiday the way they did during the same time last year. 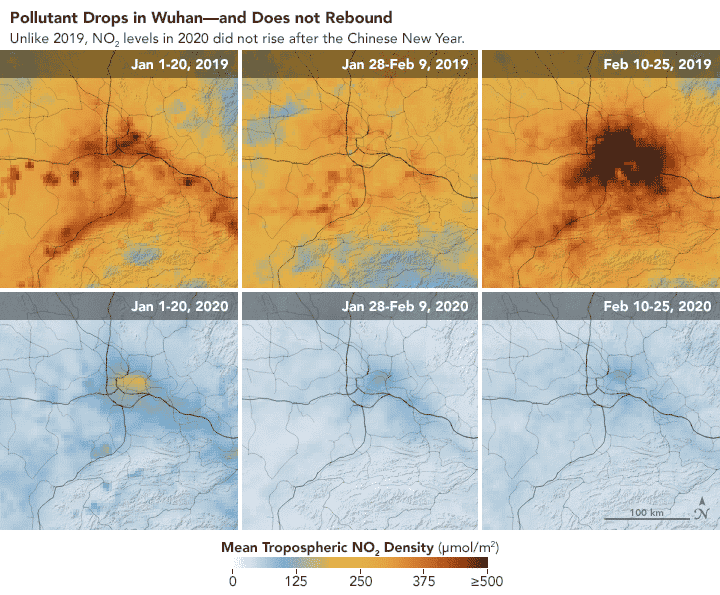 “There is always this general slowdown around this time of the year,” NASA air quality scientist Barry Lefer said. “Our long-term OMI data allows us to see if these amounts are abnormal and why.”

Emissions have fallen in the past because of economic upheavals. The economic crisis triggered by the collapse of the Soviet Union in 1991 significantly reduced greenhouse gas emissions because people in the region stopped eating meat as prices rose and purchasing power fell, leading to a decline in meat production, Nature explained.

COVID-19, which has so far sickened almost 89,000 people in 65 countries and killed more than 3,000, has already spooked the global economy. Stock markets fell last week by more than 10 percent, and the Organisation for Economic Cooperation and Development warned Monday that the continued spread of the new disease could cut economic growth in half and drive several countries into a recession, The Guardian reported.