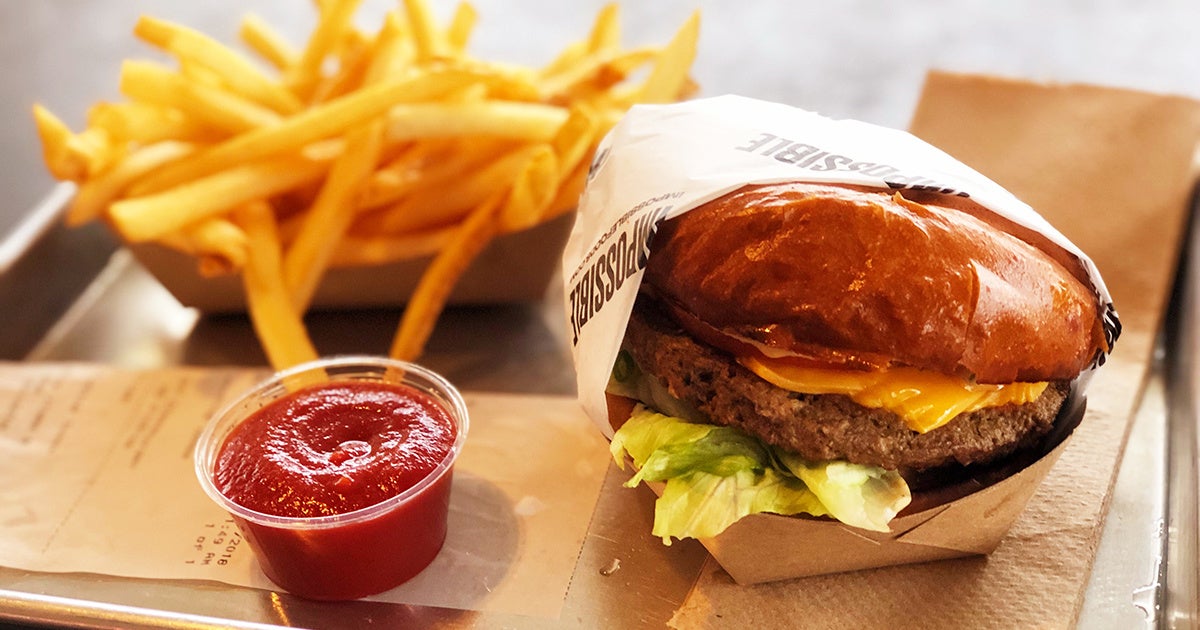 In the foodie world, 2019 might as well be named The Year of the Impossible Burger. This plant-based burger that “bleeds” can now be found on the menus of Burger King, Fatburger, Cheesecake Factory, Red Robin, White Castle and many other national restaurant chains. Consumers praise the burger’s meat-like texture and the product is advertised as an environmentally friendly alternative to traditional beef burgers.

In January, Impossible Foods launched the Impossible Burger 2.0. The company has stated that the new burger is “tastier, juicier and more nutritious” — featuring 40 percent less saturated fat than the old recipe, and just as much protein as 80/20 ground beef from cows. The new product is also gluten-free, replacing wheat with soy protein. Unfortunately, the Impossible Burger might just be too good to be true. At Center for Food Safety, we believe that replacing conventional animal products with ultra-processed, poorly studied, and under-regulated genetically engineered products is not the solution to our factory farm and climate crisis. Here’s the science to back this up.

The Impossible Burger is manufactured from two different methods of genetically engineering soy products. This “impossible in nature” union is neither healthier nor more environmentally friendly than other kinds of non-meat burgers. While Impossible Foods, the company behind the Impossible Burger, has been trying to spin its product as both healthier and more sustainable than those of its competitors, a quick examination of the company’s own data suggests otherwise.

1. The first kind of genetic engineering in the “Impossible Burger” is found in the soy used for the protein in the “burger” itself.

Rather than starting with organic soy beans, which have higher levels of protein and lower levels of Omega 6 fatty acids (the bad Omega), the company chose to use GMO soybeans, probably because they are cheaper than the organic beans. The company uses both GMO soy protein concentrate and GMO soy protein isolate for the protein in its burger. Impossible Foods does not describe how it processes the soy, but alcohol is the most common solvent used to process soy protein concentrate, as it produces products with a neutral taste. But the beneficial isoflavones in soy are removed by this method. Soy protein concentrate has the lowest level of healthful isoflavones — including daidzein, genistein and glycitein — of any form of processed soy.

Unfortunately, GMO soy is also sprayed with large amounts of the herbicide glyphosate, a product shown to cause cancer in people exposed during its application. GMO soy has been found to use significantly more herbicides than conventional soy or organic soy. At a time when juries are awarding billions of dollars in damages to those affected by exposure to glyphosate, it is startling that Impossible Foods would double down on the GMO soy that is inextricably linked to this toxic herbicide.

2. The second kind of genetic engineering of soy produces the “heme” that makes the Impossible Burger “bleed.”

In order to manufacture its burgers, Impossible Foods takes DNA from the roots of soy plants, where a small amount of “heme” is produced, and inserts it into genetically engineered yeast that is then fermented to mass-produce heme. This is the first time that people have consumed this product. The U.S. Food and Drug Administration (FDA) is supposed to require testing in this situation to make sure that this novel protein does not cause allergic reactions in people. Unfortunately, instead of requiring Impossible Foods to file a new Food Additive Petition, FDA allowed the company to use a weak regulatory process called “Generally Recognized As Safe” (GRAS) where the company does its own research and chooses its own reviewers to self-certify that its product is safe for human consumption. Center for Food Safety has a lawsuit challenging the GRAS food additive loophole that the Impossible Burger went through, allowing it and many other novel food substances to unlawfully evade government analysis and approval before coming to market.

Even under the weak GRAS process, the first time the company submitted data on the allergenicity of its “heme,” it was so inadequate that the FDA raised questions about the company’s data and the company withdrew its application so that it could redo its research. Although the FDA now says that it has “no questions” about Impossible Foods’ latest research on the safety of “heme,” the agency itself has not affirmatively declared that “heme” produced in genetically engineered yeast is safe for human consumption. Moreover, FDA has warned Impossible Foods that it cannot claim its “heme” is a source of iron based on this review and that it must label its product as a potential allergen. The FDA also notes that the company should request a review of the “heme” as a new color additive.

Most customers of the Impossible Burger will not see labels saying that the burgers are made from GMO soy or could cause allergic reactions as Impossible Foods are currently only selling to fast food chains which do not put such labels on their menus.

Rather than buy the GMOx2 Impossible Burger, choose a non-GMO burger made in your local area. The Washington Post recently highlighted six veggie-based burgers being made by local restaurants that are not serving the Impossible Burger.