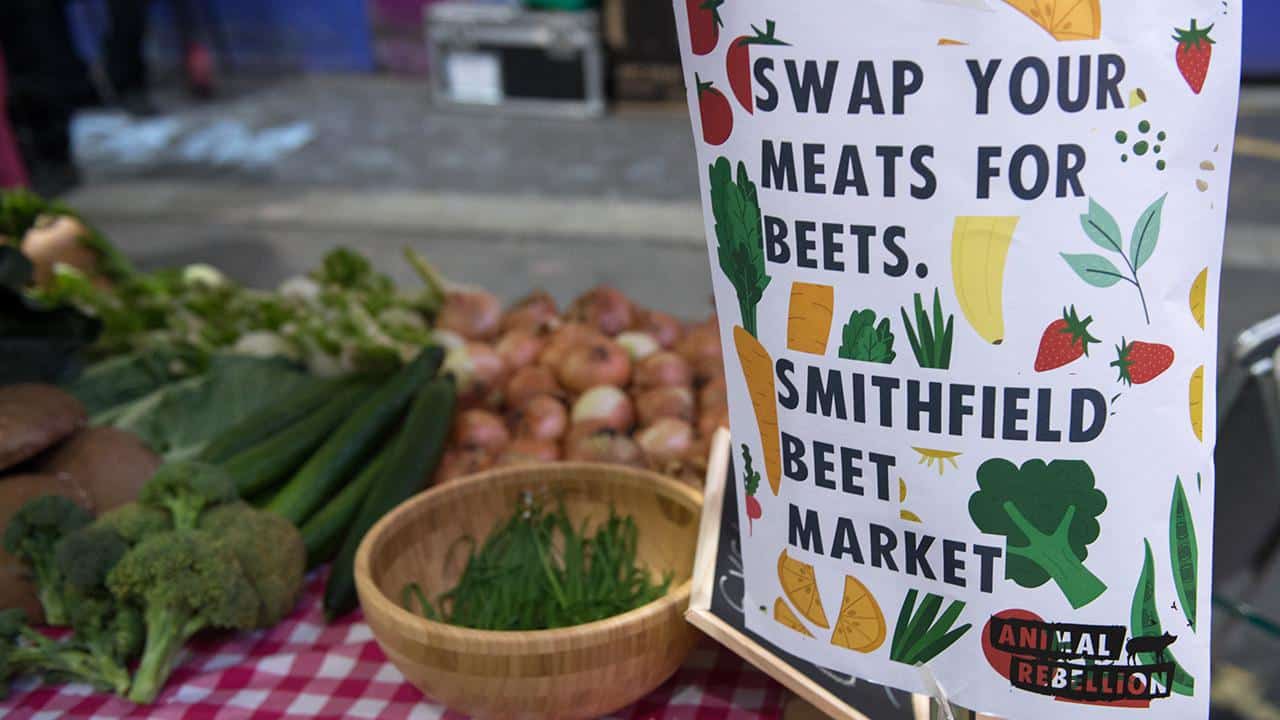 Morning breaks over Smithfield Market, one of London's busiest Meat suppliers as an Extinction Rebellion environmental activist offshoot Animal Rebellion wake up after a night occupying the space which is usually open from 2 a.m. - 8 a.m. to supply London's wholesale food industries on Oct. 8, 2019 in London. Ollie Millington / Getty Images

“Industrial meat production is not only responsible for precarious working conditions, it also pushes people off their land, leads to deforestation, biodiversity loss and the use of pesticides — and is also one of the main drivers of the climate crisis.”

Such were the words of Barbara Unmüssig of green think tank, the Heinrich Böll Foundation, at the Berlin presentation of the so-called “Meat Atlas 2021.”

Across 50 pages, the atlas — which is collaboratively published by the foundation, Friends of the Earth Germany (BUND) and the international monthly newspaper Le Monde diplomatique — outlines trends and the implications of global meat production on both human and planetary health.

It highlights, for example, how the over-use of antibiotics in intensive animal farming is leading to increasingly resistant germs, thereby threatening the effectiveness of drugs used for humans.

Similarly, the clearing of forests for animal feed is held up as a threat to human health. As habitat loss brings animals and humans into closer proximity with one another, viruses can be transmitted more easily. This, in turn, can lead to new pandemics.

In a survey for the report, young people between the ages of 15 and 29 were asked about their thoughts on meat. The majority said they rejected the meat industry in its current form. 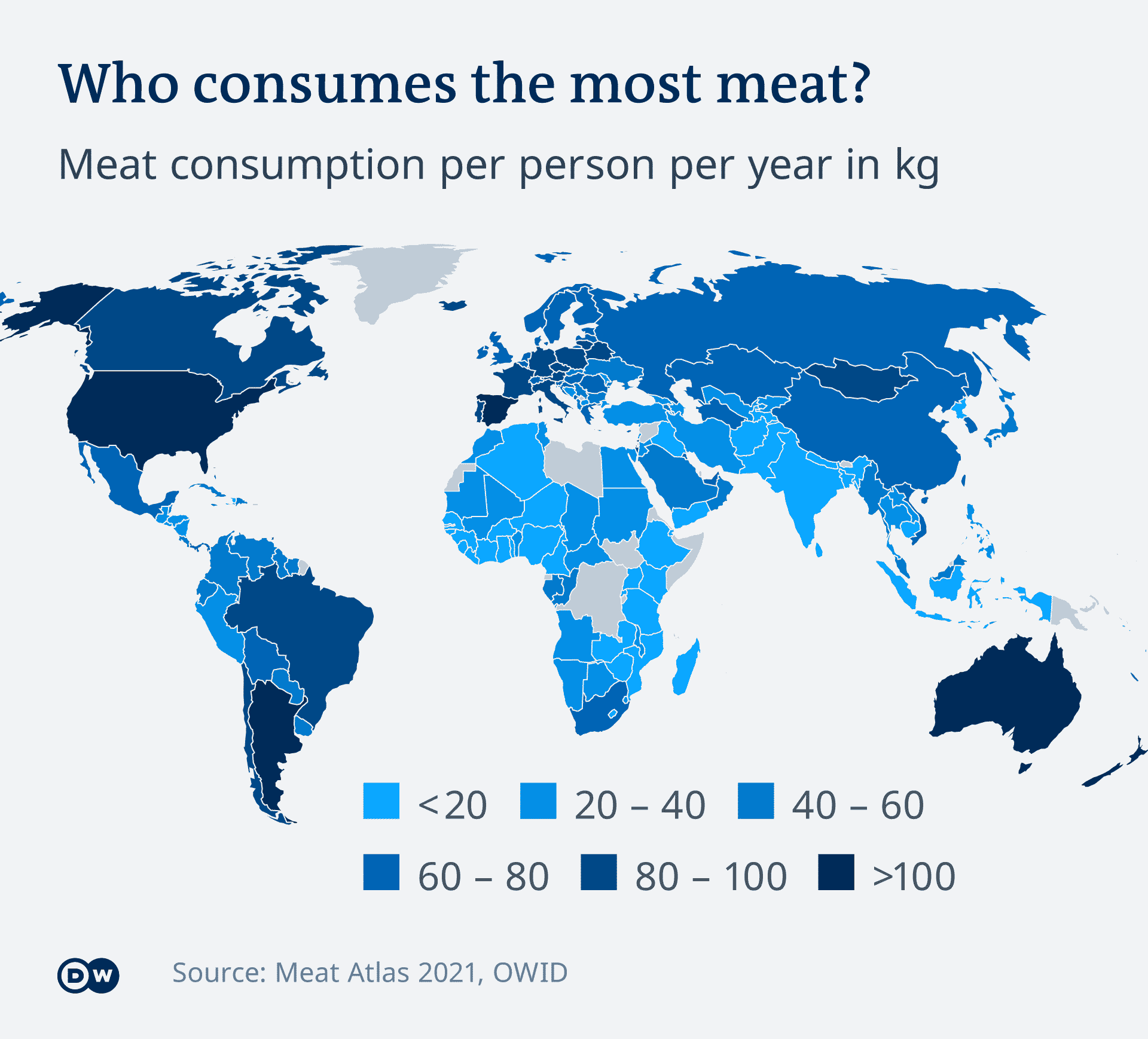 ​Olaf Bandt, chairman of BUND, says policymakers must take account of society’s desire to restructure the sector. “This requires far-reaching political realignment of agricultural policy,” he said. “But there can be no agricultural transition without a food transition.”

Bandt describes Germany as a key player in the production of pork and milk, with a 20% share of the EU market.

“Huge amounts of meat are exported,” he said, adding that this reliance on international markets is having a detrimental effect on the environment, livestock and farms. “More and more animals live on ever fewer farms, further exacerbating the pollution of groundwater in those regions.”

Global population and economic growth are the drivers behind increasing demand for meat. In 1960, the planet was home to just 3 billion people and, according to the report, meat consumption at that time was around 70 million metric tons. That equated to an annual per capita global average of 23 kilograms.

By 2018, however, when the population had grown to 7.6 billion people, meat consumption had risen seven-fold to around 350 million metric tons — or a global average of 46 kilograms per person annually.

A key problem with this trend is that meat production requires vast areas of land. According to the German Environment Agency (UBA), the country’s central environment authority, 71% of global arable land is currently used for livestock feed. That is four times the amount required for direct food growth (18%) or other raw materials such as cotton (7%) and energy crops like corn for biogas (4%). 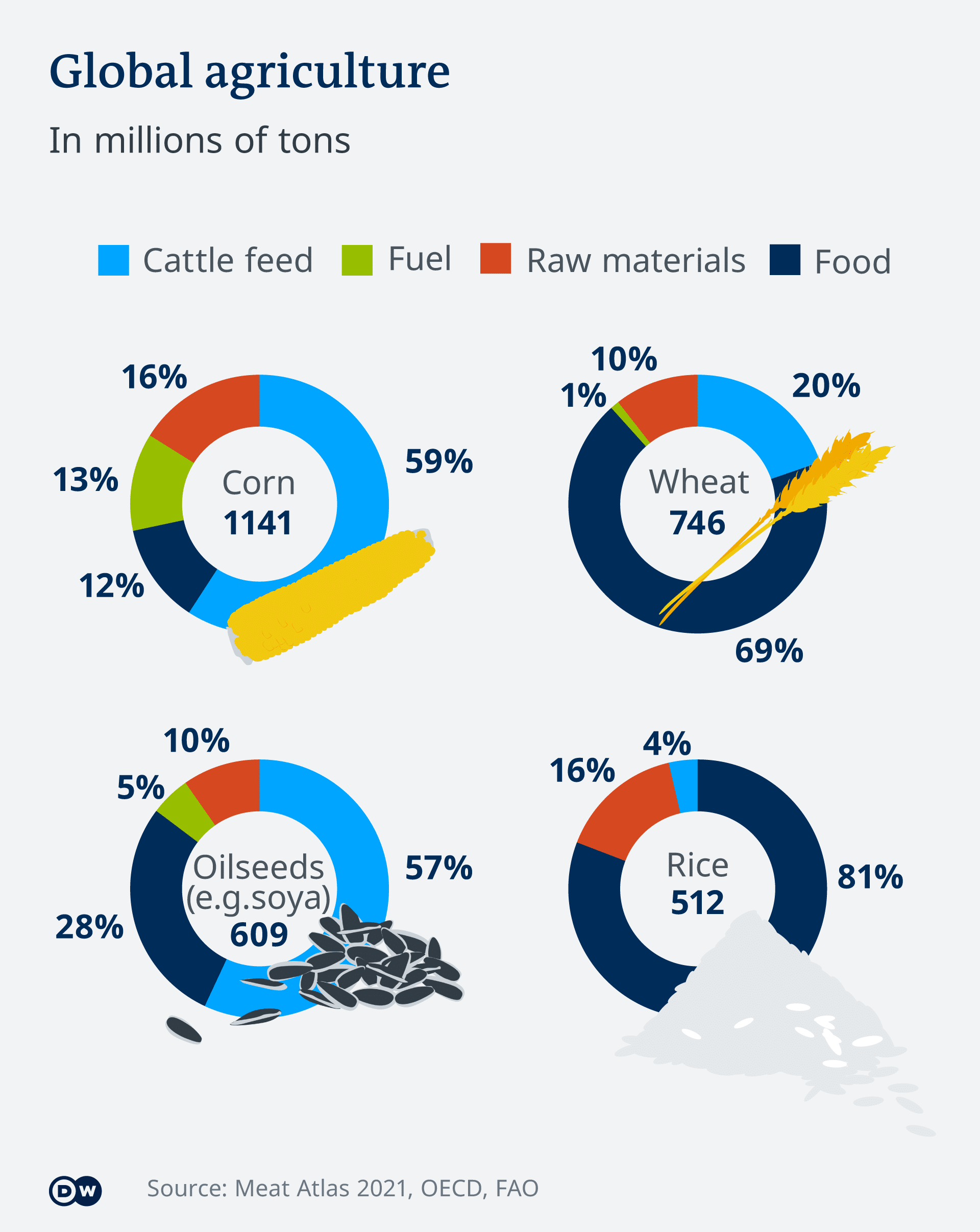 As global demand for meat continues to grow, so does the pressure on available arable land. As a result, huge areas of forest in countries such as Brazil are being lost to create land on which to grow animal fodder.

In order to feed the world’s population and stop rainforests from being cleared, while simultaneously designating land for reforestation, experts are calling for a dietary rethink: less meat and more plant-based foods that require much smaller areas.

In a report on the health of the planet published last year, leading global scientists such as Johan Rockström, director at the Potsdam Institute for Climate Impact Research (PIK) suggested dietary changes that would equate to an average of 16 kilograms of meat and 33 kilograms of dairy products per person per year. Current meat consumption in North and South America as well as in Europe can be as much as seven times that amount.

The Problem With Pesticides

Besides revealing the power and global impact of the international meat industry, authors of the “Meat Atlas” also illustrate links to the global chemical industry. They write that dangerous and sometimes banned pesticides are exported by large chemical companies. Among the producers and exporters of such chemicals are European players, Bayer Crop Science, BASF, and Syngenta, as well as U.S. companies Corteva and FMS. 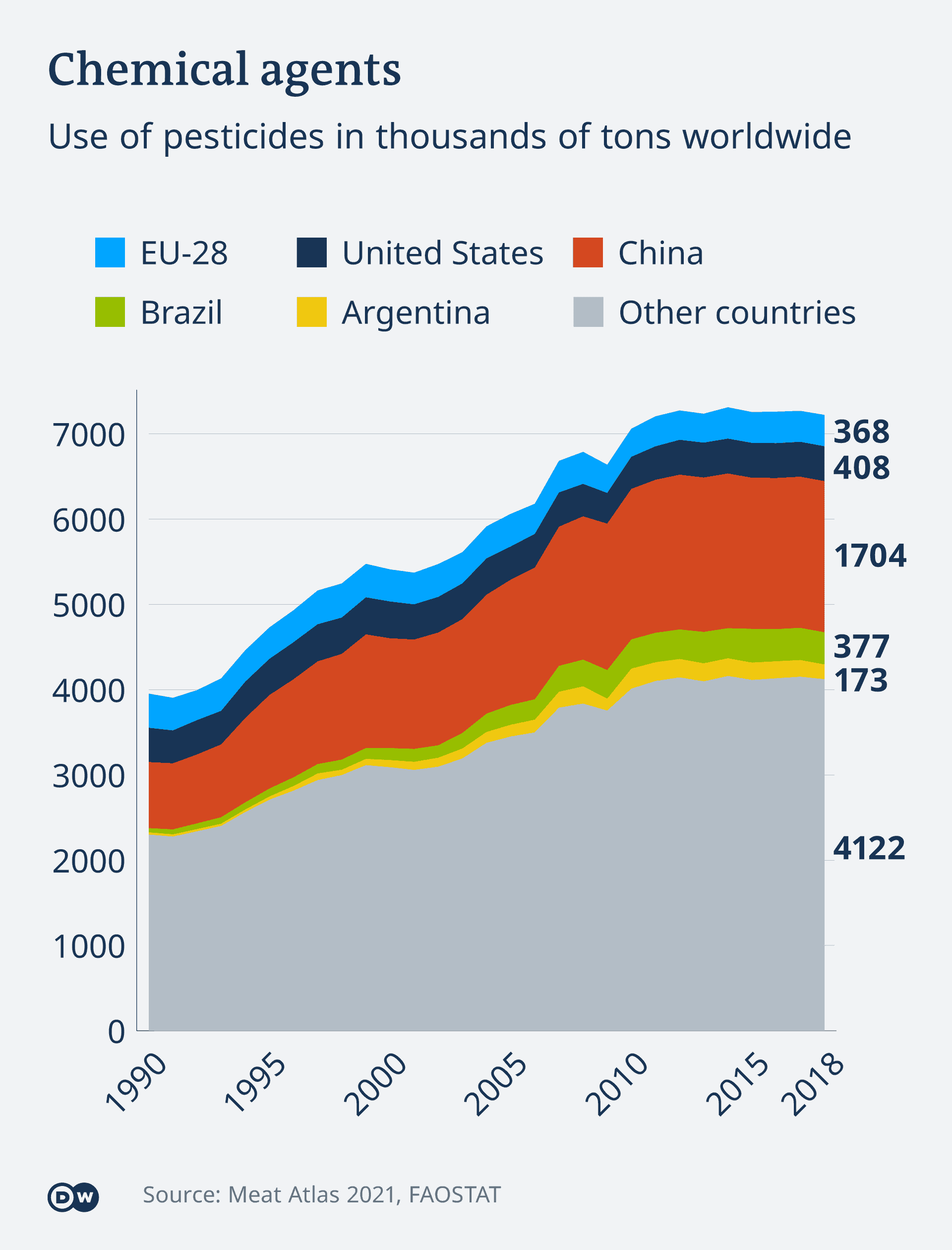 According to Unmüssig, the use of such pesticides threatens thousands of lives, which is why, Bandt says the “German government must do everything it can to ensure that German companies no longer export toxins that have been banned in the EU.”

Unmüssig warns that the planned EU-Mercosur agreement would exacerbate the use of dangerous substances. “Dismantling tariffs would lead to more pesticides being delivered to Latin America and more rainforest would be cleared for soy plantations and meat production.”

The experts conclude that establishing a way to farm animals in a cruelty-free way that doesn’t harm the climate or the environment, requires a far-reaching shift in agricultural policy as well a rethink in consumption and production.

“As yet, we have not seen the start of any real meat transition,” Unmüssig said.