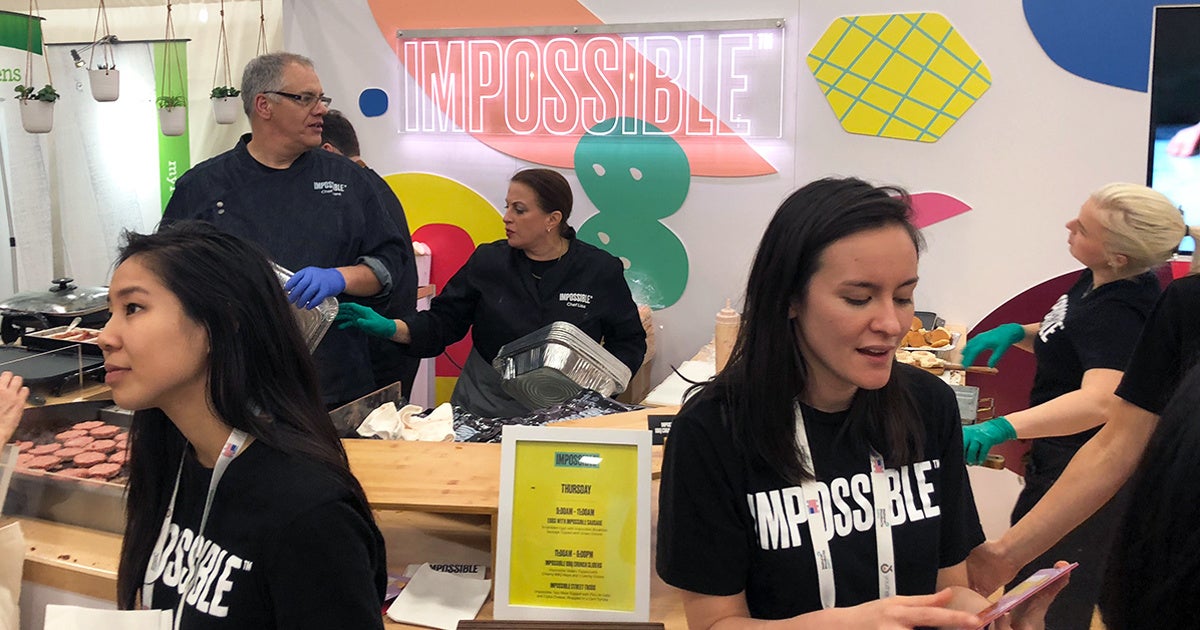 Impossible Foods served patties of their burger to attendees at the world’s largest natural food trade show — but there was no mention that the product was genetically engineered at the company’s exhibit booth or in their marketing literature.

“We’re disappointed that the company is using a ‘natural products’ show to promote its certainly not-natural product,” said Frank Lampe, vice president of communications and industry relations, for the United Natural Products Alliance. “The halo effect of being perceived as natural by its presence at the show does not serve the natural products industry or its consumers and is a disingenuous move by Impossible Foods.”

“What were the organizers of the world’s leading natural and organic show thinking when they invited in such a controversial GMO company to peddle their misleading industrial fakery?” he asked. “What’s next, a booth for Bayer to promote Roundup? Shall we just start calling it Expo Whatever?”

The Impossible Burger is one of several new plant-based — or in this case lab-created — meat products that provide the look and taste of meat while claiming to be more environmentally friendly than industrial meat production. The product is served in several thousand restaurants in the U.S., including chains like White Castle and The Cheesecake Factory (where it is falsely described as “natural” on the menu). Burger King recently announced it would test market the Impossible Burger in 60 restaurants in St. Louis.

But the Impossible Burger has been controversial because it is made using genetic engineering. The burger’s key ingredient is called heme, which is produced using a genetically engineered yeast that is fermented and multiplied. The GMO-derived heme gives the Impossible Burger its meat-like taste and red blood-like color.

In 2015, the U.S. Food and Drug Administration raised questions about the safety of the engineered heme after Impossible Foods applied for GRAS (generally recognized as safe) status. Despite FDA’s concerns, Impossible Foods put its GMO burger on the market for public consumption in 2016 anyway. Impossible Foods later submitted results from short-term rat feeding studies to the FDA and, last year, the agency said that it had no more questions about heme’s safety.

Impossible Foods plans to introduce a retail version of the Impossible Burger this year, which is why they exhibited at Natural Products Expo West, according to Nick Halla, the company’s chief strategy officer. He said that people at the show had been very receptive to the Impossible Burger.

But, Natural Products Expo West attendees didn’t know they were eating a GMO product. Impossible Foods’ exhibit booth and literature made no mention that the Impossible Burger’s key ingredient, heme, is genetically engineered.

When asked why they weren’t transparent about the burger being GMO, Halla said the recipe cards being given out wasn’t appropriate literature for describing the genetic engineering process. But, a more detailed brochure at the booth also said nothing about GMO heme, only describing it as “magic ingredient found in all living things.” Halla said Impossible Foods is transparent about its use of genetic engineering on its website.

But Lampe said Impossible Foods lack of transparency at Natural Products Expo West was unethical. “Impossible Foods is legally allowed to not provide that information to consumers. Legal? Yes. Responsible and ethical? I don’t think so,” Lampe commented.

So, how did a GMO food company get into the world’s biggest natural food trade show? According to the standards for exhibitors at Natural Products Expo West, a company can promote foods with GMO ingredients as long as they don’t claim their products are natural.

“We don’t rule out GMOs yet, because if we did we could have Natural Products Expo in my child’s school gymnasium (because genetically engineered ingredients are so pervasive in the food supply),” said Michelle Zerbib, standards director at New Hope Network, which hosts Natural Products Expo West. “What we do with GMO products is that we don’t allow them to market as natural, 100 percent natural or any natural claims,” she said.

New Hope’s ingredients standard for exhibitors requires the use of non-GMO yeast but only as a flavor enhancer. Impossible Foods uses a GMO yeast to make the Impossible Burger’s key ingredient.

“There’s a standard for (non-GMO) yeast but that’s according to flavoring, not the product itself,” Zerbib said.

Zerbib also admitted that New Hope Network doesn’t have the staff or time to closely inspect each exhibitor’s ingredients. “We just don’t have the resources to do that,” she said.

Lampe said it is difficult for New Hope to keep up with the growing number of products made using new genetic engineering technologies.

“Unfortunately, there are an increasing number of synbio ingredients and products already in the marketplace in foods and dietary supplements, and trying to determine show acceptance in light of the rapidly changing marketplace, with no mandated federal labeling for the new classes of GMO products and no testing protocols in place, is not an enviable task for the New Hope standards folks,” Lampe said.

“This is Not Clean Food”

But she also said it may be time for New Hope Network to look at revising their ingredient standard as new GMO products come to market.

“We probably need to revisit it maybe take another look because there have been a lot of different technologies that have come out since we incorporated our ingredients standard in 2009,” she added.

Alan Lewis, director of government affairs and food and agriculture policy for Natural Grocers, said the natural food community needs to take a strong stand against new GMO products like the Impossible Burger.

“If we are going to apply the cautionary principle to every other suspect food ingredient, then certainly synthetic heme, grown in genetically modified cultures, qualifies for scrutiny. Novel molecules and unknown ingredients have never been embraced in natural food. What are we thinking? This is not clean food,” said Lewis.

Ken Roseboro is editor and publisher of The Organic & Non-GMO Report, a monthly news magazine that focuses on threats posed by GM foods and the growing non-GMO food trend.