An executive from a company selling a genetically engineered meat alternative faced tough questions at the Sustainable Foods Summit held in San Francisco at the end of January.

Nick Halla, chief strategy officer of Impossible Foods, gave a presentation about his company’s Impossible Burger as a sustainable solution to the problems of industrial meat production. He claimed their lab-created burger uses about 74 percent less water, generates about 87 percent fewer greenhouse gases and requires around 95 percent less land than conventional ground beef from cows. Halla said the Impossible Burger is seeing rapid acceptance in the marketplace, sold in many restaurants and “better burger” chains.

But Halla’s PowerPoint slides didn’t mention that the Impossible Burger’s key ingredient is a genetically engineered protein called soy leghemoglobin or “heme.” The presentation also didn’t mention that the U.S. Food and Drug Administration told Impossible Foods that the company hadn’t demonstrated the safety of heme after it applied to the FDA seeking GRAS (generally recognized as safe) status. Despite FDA’s concerns, Impossible Foods sold its GMO-derived burger for public consumption anyway.

Several audience members took Halla to task over Impossible Foods marketing its burger despite FDA concerns, short-term feeding studies, and lack of transparency about the use of the GMO ingredient.

Mark Squire, owner and manager of Good Earth Natural Foods, said he read the FDA documents about Impossible Foods application for GRAS status and was “shocked that a company could come out with a new food additive and not have it subjected to government and long-term scrutiny.”

Pamm Larry, director of GMO-free California, asked Halla why his company had conducted such short, 14- and 28-day rat feeding studies of the product.

“Why did you do such short feeding studies when you know the minimum industry standard is 90 days?”

Ken Ross, board member of the ProTerra Foundation and a speaker at the conference, also said that the feeding studies are unacceptable.

Larry said she spoke to several restaurants that serve the Impossible Burger but didn’t know it was GMO. She also asked if Impossible Foods labels their product as GMO. Halla said his company doesn’t label the product as GMO but that information about the use of genetic engineering is on the company’s website. 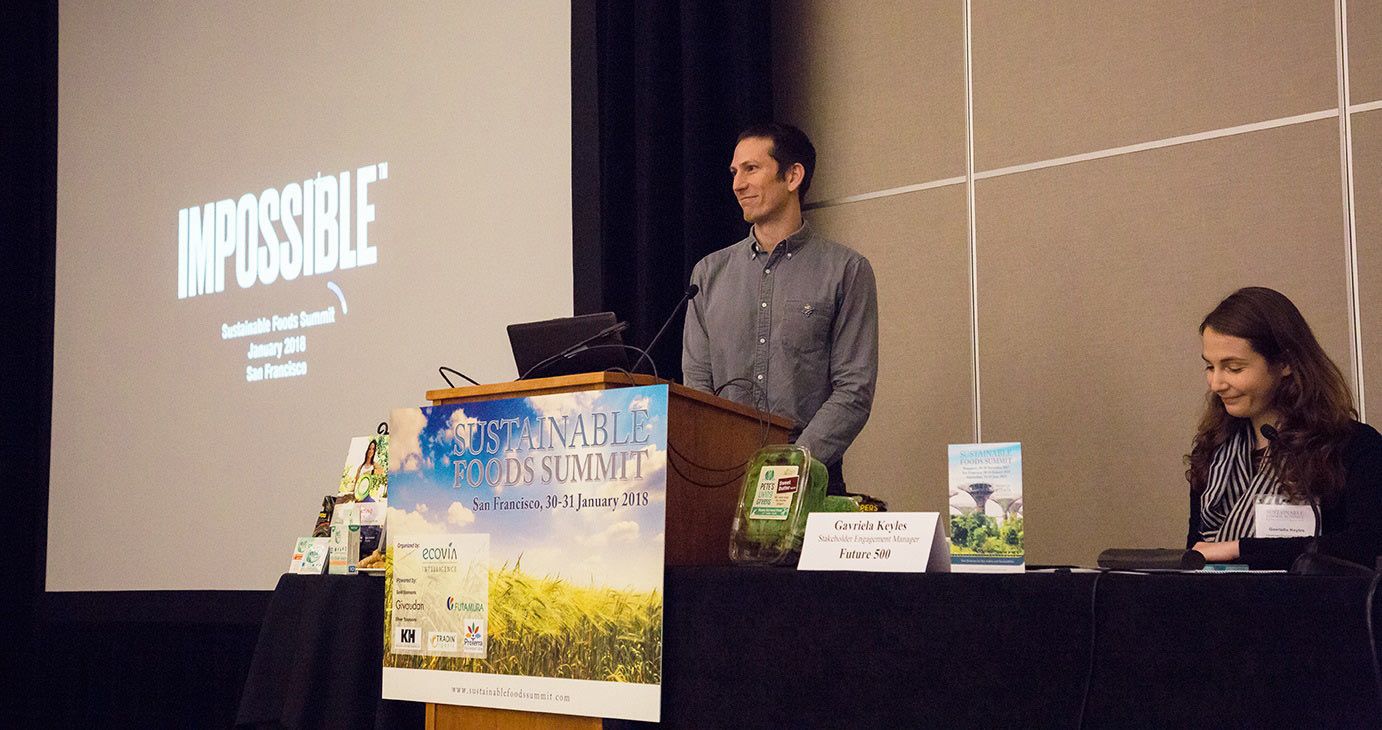 Squire said Impossible Foods was not being transparent. “I don’t think people selling burgers understand (Impossible Foods’) technology. There is no transparency; there is a huge information gap. Halla said ‘everything is on our website.’ But if you go to their website, there is very little there.”

Ross thought that Impossible Foods rushed the Impossible Burger to market due to pressure from investors.

“They call the shots and want to get the product commercialized and into the market and so they aren’t doing a 2-year feeding study and doing superficial short studies instead.”

Ross told Halla that—with its questionable feeding studies and lack of transparency—Impossible Foods is repeating the same deceptions that the biotech industry has done in the past.

“You’re speaking to an audience that has already been down that road,” he said.

“He was clearly chastened by the reaction. I don’t think he thought he was coming into a hostile environment,” Ross said.

Amarjit Sahota, president and owner of Ecovia Intelligence, organizer of the Summit, acknowledged that Halla “received a lot of criticism after his seminar.”

“We believe the feedback and criticism Impossible Foods received will make them think twice about making claims in the future and make them more transparent about their ingredients,” Sahota said.

Editor’s Note: I sent an email to Impossible Foods asking if Nick Halla could tell me his responses to the audience’s questions during the summit. I wanted to get his perspective. My email was answered by Rachel Konrad, Impossible Foods chief communications officer, who did not attend the summit.

Regarding the short-term animal feeding study, Konrad wrote: “Our rat-feeding study was comprehensive and statistically valid; a panel of experts reviewed the study and unanimously agreed that soy leghemoglobin is safe.”

When asked about how employees at the burger restaurants don’t know that the Impossible Burger is genetically engineered, Konrad wrote that her company provides training sessions for chefs and kitchen staff: “In these sessions, we explain the ingredients—including how we produce heme through fermentation of a genetically modified yeast.”