Impossible Burger and the Road to Consumer Distrust 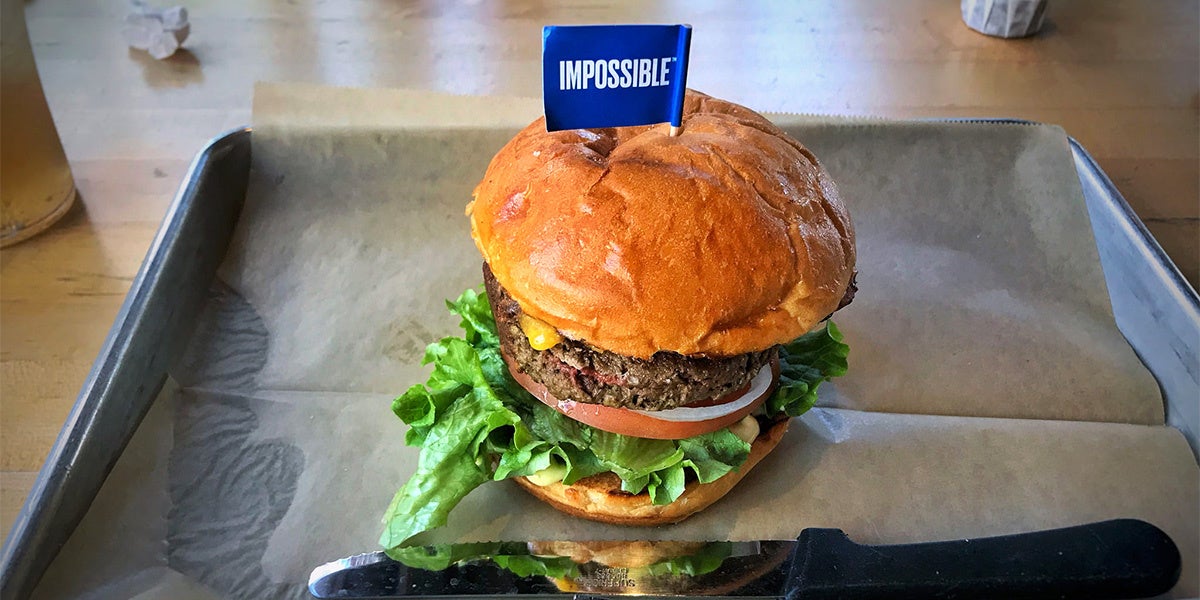 For anyone who wonders why consumers aren’t inspired to trust the GMO industry, consider this bizarre statement from Impossible Foods Chief Communications Officer Rachel Konrad in defense of the Impossible Burger, a veggie burger made more meat-like via genetically engineered yeast.

Konrad was upset by a June 27 Bloomberg article Is it too early for fake meat? that raised concerns about insufficient research, regulation and labeling in the realm of new food technologies.

Konrad took to Medium, blasting critics of the Impossible Burger as “anti-science fundamentalists” and “setting the record straight” with information she sourced from chemical industry front groups and other unreliable anti-consumer messengers who regularly communicate inaccurate information about science.

Bloomberg is not a trusted source of reporting on science, according to Konrad, because the American Council on Science and Health (ACSH) says so. The ACSH is a corporate front group that solicits money from tobacco, chemical and pharmaceutical companies to defend pesticides, e-cigs, cosmetics and other toxic products that aren’t likely to win over the vegan crowd.

Instead of enduring the bias of Bloomberg, Konrad tells us, we should take heart in the rise of Mark Lynas, a promoter of GMOs and pesticides who communicates inaccurate information about science, according to scientists and food experts.

Konrad’s article also links to a column by Ted Nordhaus, who sits on the board of the parent organization of Genetic Literacy Project, a chemical industry propaganda group that attacks cancer scientists as part of its role as an “industry partner” in Monsanto’s public relations strategy to protect Roundup weed killer from cancer concerns.

Impossible Foods had a chance to turn a new leaf. Up to now, most GMO foods have been engineered to survive the spraying of weed-killing chemicals: glyphosate, now also dicamba, and soon also 2,4-D, in what environmental groups call the GMO pesticide treadmill. But the GMO industry is changing with the emergence of new techniques such as CRISPR and synthetic biology.

As one of the first food companies out with a genetically engineered food product that may actually offer consumer benefits (if one likes “bleeding” veggie burgers), Impossible Foods had the opportunity to write a new story, and build trust with an open, transparent process that respects consumer concerns. They blew it.

Impossible Burger’s new genetically engineered protein is new to the human food supply, and we are supposed to trust the manufacturer to vouch for its safety. But the company’s process hasn’t inspired trust.

Their GMO “heme” ingredient is “super safe,” according to the Impossible Foods website. Konrad explains in Medium, “An objective, third-party team of the nation’s top food researchers unanimously concluded in 2014 that the Impossible Burger’s key ingredient, soy leghemoglobin (produced by a genetically engineered yeast), is ‘generally recognized as safe.’ The panel made this conclusion in 2014, well before we began selling the Impossible Burger on the market in 2016.”

She left out some important facts. As the New York Times reported last August, when the Food and Drug Administration raised concerns that the studies presented in Impossible Foods’ GRAS notification were inadequate to establish safety, the company withdrew its petition but put the burger on the market anyway.

That was within their rights, but not a way to establish confidence in their product.

Another flag: The three food researchers who wrote the expert panel report that Impossible Foods submitted to the FDA—Joseph Borzelleca, Michael Pariza and Steve Taylor—are on a short list of scientists the “food industry turns to over and over again” to obtain GRAS status, and all three served on the Phillip Morris Scientific Advisory Board, according to a 2015 investigation by the Center for Public Integrity, The Misinformation Industry: Food safety scientists have ties to Big Tobacco.

Borzelleca, the Center for Public Investigation reported, was the most active of the go-to scientists, having served on 41 percent of 379 panels convened in the last 17 years to review the safety of new food ingredients.

“Despite his decades of experience and praise heaped upon him by colleagues—one called him a ‘wonder’—critics of the GRAS system say Borzelleca is emblematic of a system that is rife with conflicts of interest,” CPI reported. “If scientists depend on the food industry for income, they may be less likely to contest the safety of ingredients companies hope to market, critics say.”

“These are standing panels of industry hired guns,” Laura MacCleery, an attorney for the Center for Science in the Public Interest, told CPI. “It is funding bias on steroids.”

But the views of critics with legitimate concerns are not welcome in the world of the Impossible Burger, according to Rachel Konrad.

Rather than blazing a new path of integrity with its new food technology, Impossible Foods has decided to follow a path well worn by many other purveyors of food additives and genetically engineered foods: rush new products to market without a transparent process or comprehensive safety reviews, then shout down anyone who raises concerns. Across our nation, people who want to know what’s in their food find such arrogance distasteful.