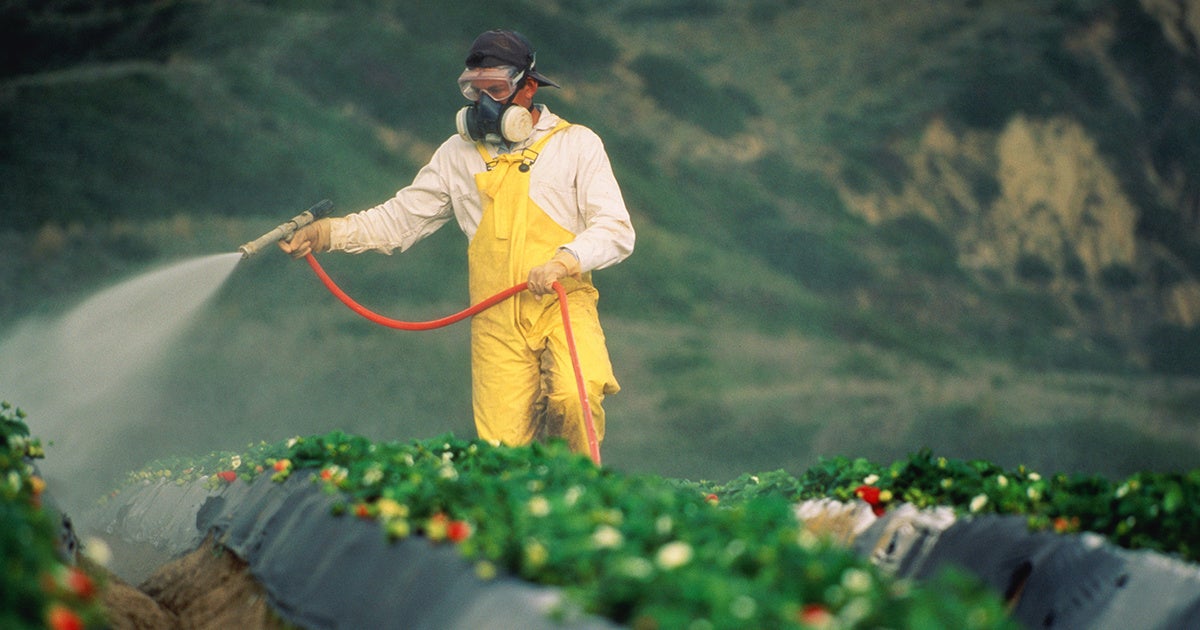 A worker in California sprays pesticides on strawberries, one of the crops on which chlorpyrifos is used. Paul Grebliunas / The Image Bank / Getty Images Plus

President Donald Trump‘s U.S. Environmental Protection Agency (EPA) will not ban the agricultural use of chlorpyrifos, a toxic pesticide that the EPA’s own scientists have linked to brain damage in children, The New York Times reported Thursday.

The decision, announced Thursday, was a response to a petition from public health and environmental groups who had pushed for a ban. The agency ruled that “critical questions remained regarding the significance of the data” on the pesticide’s health effects, according to The Guardian.

The ruling is the latest in a series of Trump EPA decisions that weaken chemical safety rules, The New York Times pointed out. In April, it opted against a full ban on asbestos in favor of restrictions that critics say could usher in new uses. Also this year, it issued restrictions on a paint-stripping chemical that were weaker than a ban proposed during the Obama years. Finally, just last week, it widely expanded the use of the pesticide sulfoxaflor, which its own scientists have shown can harm bees, as HuffPost reported.

“Siding with pesticide corporations over the health and well-being of kids is the new normal at the EPA,” Environmental Working Group President Ken Cook said in a statement. “Today’s decision underscores the sad truth that as long as the Trump administration is in charge, this EPA will favor the interests of the chemical lobby over children’s safety.”

The EPA’s decision came after a federal court ordered the agency to make a final call on the ban by mid-July. Chlorpyrifos has been banned for home use since 2000, but farmers have continued to spray it on crops like apples, strawberries, broccoli and corn. The Obama administration had initiated a ban on agricultural uses of the pesticide, but Trump’s EPA reversed it, setting off a legal battle with environmental advocates. In the absence of federal action, states have moved against the pesticide on their own. Hawaii became the first state to ban chlorpyrifos in 2018, and California announced it would ban the chemical in May. New York is also moving towards a ban, The New York Times reported.

Research has linked chlorpyrifos exposure to lower IQ, memory loss, breathing problems and increased risk of autism in babies born to mothers who lived near farms where it was sprayed, according to The Guardian.

“What we have with chlorpyrifos is multiple academic research projects that have shown that actual children who actually live in California are being harmed by this chemical,” Center for Environmental Health senior scientist Caroline Cox told The Guardian. “It’s pretty rare that you have that kind of evidence for any toxic chemical.”

So how was the EPA able to decide that the science wasn’t conclusive? The New York Times explained that the ruling was a direct consequence of former EPA administrator Scott Pruitt‘s decision to limit the kinds of studies that regulators could use to make decisions:

Under Mr. Pruitt, the agency proposed a rule saying it could not consider scientific research unless the raw data behind it was made public, saying the issue was a matter of transparency. Scientists argued that studies measuring human exposure to pesticides and other chemicals often rely on confidential health information and argued the E.P.A.’s real motivation was to restrict the ability to develop regulations.

In opting not to ban chlorpyrifos, the E.P.A. rejected a major study conducted by Columbia University on its effects on children in New York City. The E.P.A. said because it was unable to obtain the raw data and replicate that study, which linked the insecticide to developmental delays, it could not independently verify the conclusions.

The 12 groups who brought the petition against the EPA vowed to keep fighting.

“We will continue to fight until chlorpyrifos is banned and children and farmworkers are safe from this dangerous chemical,” they said in a joint statement reported by Earthjustice, the legal organization that represented the groups.

“To me, this starts the clock on the use of chlorpyrifos on food crops in the US,” he told the Associated Press.