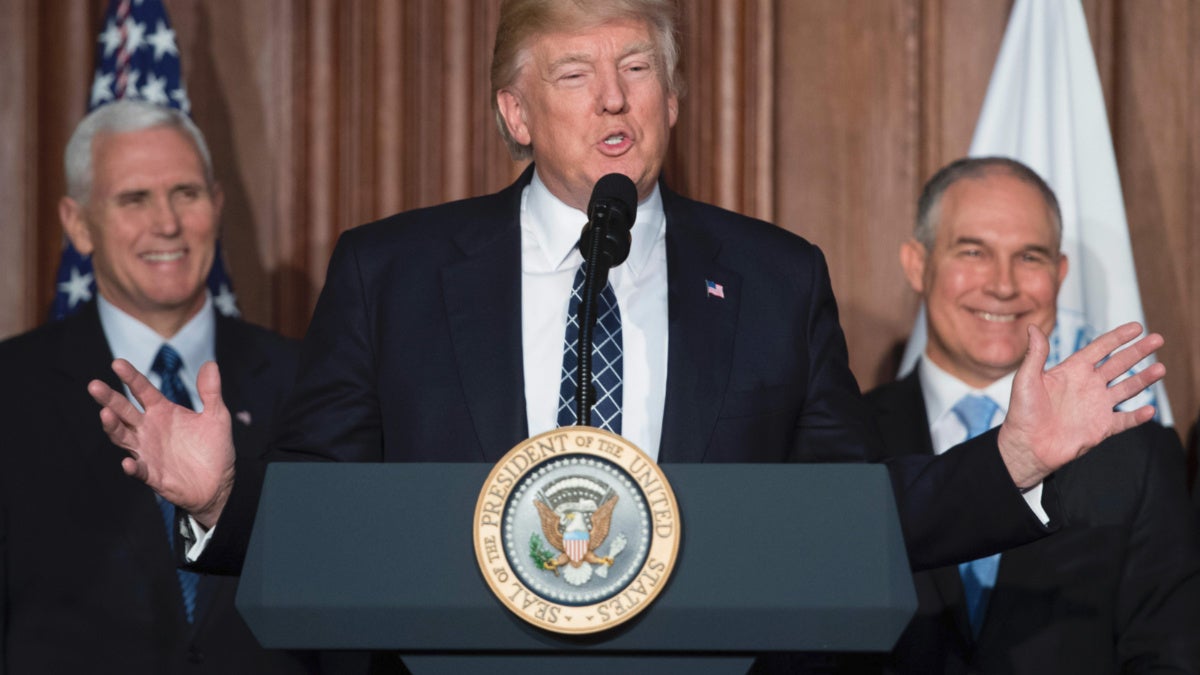 The Trump administration is diligently weakening US environment protections even amid a global pandemic, continuing its rollback as the November election approaches.

During the Covid-19 lockdown, US federal agencies have eased fuel-efficiency standards for new cars; frozen rules for soot air pollution; proposed to drop review requirements for liquefied natural gas terminals; continued to lease public property to oil and gas companies; sought to speed up permitting for offshore fish farms; and advanced a proposal on mercury pollution from power plants that could make it easier for the government to conclude regulations are too costly to justify their benefits.

The government has also relaxed reporting rules for polluters during the pandemic.

Trump’s ambitions reach even to the moon, which he has announced he wants the US to mine.

“People right now are hunkered down trying to put food on the table, take care of people who are sick, worry about educating their children at home,” McCarthy said. “How many people are going to really be able to sit down and scrutinize these things in any way?”

McCarthy said the government was “literally not interested in the law or science,” and that “is going to become strikingly clear as people look at how the administration is handling Covid-19.”

The Trump administration is playing both offense and defense, rescinding and rewriting some rules and crafting others that would be time-consuming for a Democratic president to reverse.

The Environmental Protection Agency (EPA) has written what critics say will be a weak proposal for climate pollution from airplanes, a placeholder that will hinder stricter regulation.

Trump officials have been attempting to create a coronavirus relief program for oil and gas corporations, a new move in his campaign to back the industry and stymie global climate action. The president has sown distrust of climate science and vowed to exit the Paris climate agreement, which the US can do after the election.

Historians say Trump’s presidency has forced a pendulum swing back from the environmental awakening of the 1960s and 70s, when there was bipartisan support for conservation. Protecting the environment – and particularly the climate – is an issue that has become embroiled in political ideology.

“What Trump’s done is create a blitzkrieg against the environment … trying to dismantle not just Obama’s environmental achievements but turn back the clock to a pre-Richard Nixon day,” said Douglas Brinkley, a history professor at Rice University who is writing a book on the subject.

“It’s just death by a thousand cuts. It’s not one issue, it’s just across the board.”

The administration is under a tight deadline to secure changes before the election. A US law, the Congressional Review Act, allows lawmakers to more easily rescind regulations or rollbacks issued later in an election year.

“They’re hitting a now or never timeline,” said Christine Tezak, the managing director at the analysis firm ClearView Energy Partners. “There’s a lot they want to get done before the election, just in case.”

Some trends are working against Trump – including states advancing environmental goals, and low-cost renewable power and natural gas helping reduce the climate footprint of the electricity sector. Even Houston, an energy hub, has issued a climate action plan. Yet such contributions are not expected to be enough to fulfill America’s role in stalling the global crisis.

Environmental advocates have challenged many of the Trump changes in court – and won. The Natural Resources Defense Council has sued 110 times and says it has prevailed in about 90% of lawsuits resolved.

Recently, judges tossed out a permit for the Keystone XL oil sands pipeline and decided the EPA cannot bar scientists who receive federal grants from serving as agency advisers.

Jeff Holmstead, a lawyer with the firm Bracewell who represents regulated industries and was a deputy EPA administrator under George W Bush, argued that many of the changes characterized as “rollbacks” are actually “sensible, reasonable regulatory reforms” or fixes to problems.

“It’s impossible to understand the Trump administration’s EPA unless you go back and look at the Obama administration,” he said. “In many groups there was a sense that there really had been a great deal of regulatory overreach. And even if you disagree with that, the regulatory programs created problems that they didn’t come back and fix.”

‘This Is About Who We’re Protecting’

Trump’s deregulatory agenda has addressed some issues industry would rather were left alone. The agency is changing the way it calculates the benefits of mercury controls for power plants. Companies had already complied with the rule and most didn’t want it changed. But the revision is meant to set a precedent for the government to ignore some positive health outcomes of regulation.

Last month, for example, the EPA decided not to tighten rules for soot pollution, refuting rebutting guidance from experts that more stringent standards would save lives. The EPA has also repopulated advisory boards with representatives from industry and conservative states and is trying to change what science it can consider when developing health protections.

If a Democrat takes the White House, it will take years to reverse some changes. Moving faster would require Democrats holding both chambers of Congress. Even then, industry would fight hard.

Christopher Cook, the environment chief for Boston, said Trump’s efforts had been “incongruous with all the actions that major cities are taking.”

“The thing I would ask most Americans to consider when they’re supporting stronger regulation is that this isn’t about what we’re protecting against, this is about who we’re protecting,” Cook said, noting that places with more pollution are faring worse under the coronavirus pandemic.

“Covid has been a dry run for the climate crisis. We’ve seen the populations that Covid affects because it attacks the respiratory system. We can’t continue with bad air in America.”