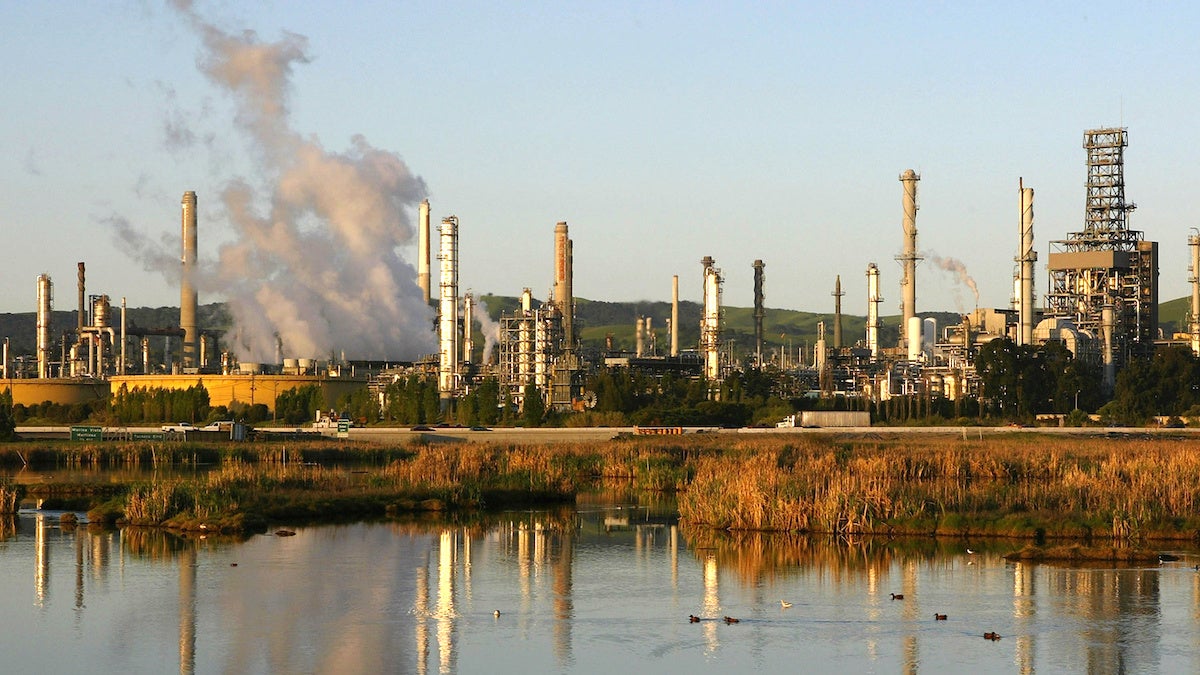 California, along with eight other states, sued the EPA for suspending enforcement of air and water pollution monitoring and reporting from places like the Shell refinery in Martinez, CA, seen here on April 1, 2004. Justin Sullivan / Getty Images

The move has been called an implicit “license to pollute,” according to The Hill, and allegedly violates numerous federal pollution laws as well as the EPA’s duty to protect the environment.

The states’ complaint challenges a March 26 EPA memo in which the agency put forth a new, relaxed policy. Polluters are allowed, at their sole discretion, to stop monitoring and reporting air emissions and water pollution levels during the outbreak.

The memo was produced by the EPA’s compliance director, Susan Parker Bodine, three days after she received a request from the American Petroleum Institute to halt pollution enforcement, reported the San Francisco Chronicle.

In the memo, Bodine announced that the new, relaxed policies would be retroactive to March 13, when President Trump declared a state of emergency regarding COVID-19. Due to outbreak-related “potential worker shortages” and “travel and social distancing restrictions,” companies could decide for themselves when it would no longer be practical to monitor pollution and report it to federal, state and local agencies, the San Francisco Chronicle reported.

Bodine said businesses should try to follow reporting and monitoring regulations but that noncompliance would not be penalized if caused by coronavirus, reported the San Francisco Chronicle. She did not indicate how the EPA could learn of any violations or dangerous emissions if reporting isn’t required, the news report added.

Similarly, the regulation change is “temporary,” but no end date is indicated in the memo. And, while companies are required to document their noncompliance, critics fear the environmental damage will already be done, reported The Hill.

EPA Administrator Andrew Wheeler said that the EPA recognized that challenges created by COVID-19 “may directly impact the ability of regulated facilities to meet all federal regulatory requirements,” reported the San Francisco Chronicle.

Wheeler also said the agency would still “expect facilities to comply with their obligations under the law” unless, of course, Covid-19 made it “impracticable,” reported Bloomberg Law.

The states’ lawsuit, filed in New York federal court, alleges that the EPA lacks the legal authority to “effectively waive critical monitoring and reporting obligations” that alert the public to environmental and health hazards, reported Bloomberg Law. It also argues that the EPA failed to properly weigh the public health impacts the relaxed policy will have amid the coronavirus pandemic, reported Reuters.

“Rather than exercising enforcement discretion as authorized by law, EPA issued a broad, open-ended policy that gives regulated parties free rein to self-determine when compliance with federal environmental laws is not practical because of Covid-19,” the complaint stated.

The enforcement suspensions will lead to more chemical spills and “likely will result in increased air and water pollution,” endangering residents who live nearby, downwind or downstream, the suit added, reported the San Francisco Chronicle.

The states also argued that the EPA failed to demonstrate both the need for the drastic change and any rationale for bypassing the traditional notice and comment period required for new rules, reported The Hill. The Clean Air Act and Clean Water Act both require companies to monitor and report emissions to the EPA, and the agency has therefore exceeded its authorities under both regulations, the complaint says, reported The Hill.

California Attorney General Xavier Becerra said, “The Trump Administration is trying to use the current public health crisis to sweep environmental violations under the rug,” reported The Hill.

“What’s worse, the Administration is doing so even as evidence grows that communities exposed to air pollution are at increased risk from coronavirus,” he added, reported The Hill.

The EPA would not comment on the litigation, but told The Hill that “the EPA temporary policy is a lawful and proper exercise of the Agency’s authority under extraordinary circumstances.” In the same statement, the EPA noted, “This is not a nationwide waiver of environmental rules.”

The EPA was also sued on April 16 by environmental groups seeking to require the agency to determine when companies stopped complying with environmental laws and to immediately notify the public, reported the San Francisco Chronicle.

The nine states filing the complaint are California, Illinois, Maryland, Michigan, Minnesota, New York, Oregon, Vermont and Virginia. The suit alleges that the regulation rollback, if allowed to persist, will force states to try to “fill EPA’s enforcement shoes at a time when they are increasingly strapped for resources, or risk the health of our residents,” reported the San Francisco Chronicle.