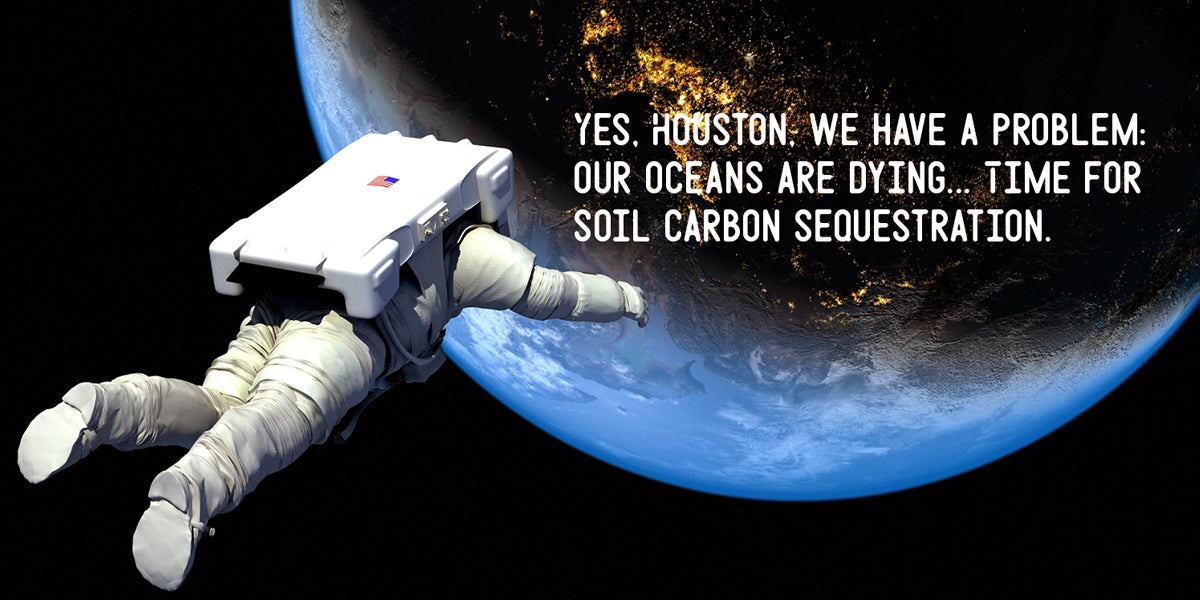 Yes, Houston, we have a problem: Our oceans are dying.

As the brilliant futurist Buckminster Fuller used to point out, our Spaceship Earth is hurtling through space at a great speed.

Imagine if someone told you (a passenger on that ship) that the main oxygen systems were failing because of how food was being grown.

What would you do upon receiving that dire warning? Perhaps work to make a change? Lobby the ship’s captain? Maybe you’d simply deny that there was any such connection and keep going about your busy life.

But an imminent loss of oxygen just happens to be a current fact, because the ocean’s phytoplankton (which provides two-thirds of the planet’s oxygen) is rapidly dying off. Industrial agriculture not only contaminates our oceans with pesticide and nitrogen-fertilizer runoff, leading to massive dead zones; it is stripping our soils of carbon, which ends up in the oceans and creates acidification. At the current trajectory, in just a few decades there won’t be much left alive in our oceans as the phytoplankton dies—all because of how we grow our food.

When climate change is discussed, the media, our governments and the climate movement are focused on the “evil” carbon in the atmosphere and the melting of the Arctic region. They’re pleading with governments and Fortune 1000 firms to stop conducting “Drill, baby, drill” operations. Important stuff for sure, but lost in this debate of how much oceans will rise or how hot the planet will be in 2100 is a very sobering fact. If we don’t immediately deal with the number one enviro issue of the day, ocean acidification, humanity will not be around in 2100 to observe rising temperatures or oceans lapping over Wall Street and Silicon Valley.

The good news is that we can cool both the planet and the seawater, while removing excess carbon from the sea, by regenerative agriculture—a solution literally under our feet!

The Regenerative Agriculture Initiative at California State University, Chico, and the Carbon Underground group have created this concise definition:

The little-known facts are that (a) industrial agriculture contributes more to climate change than Chevron, Exxon and the entire transportation industry combined and (b) regenerative agriculture can reverse climate change if we shift our society’s focus from degeneration to regeneration. If we can put men on the Moon, can we shift how we grow food in way that supports life on Spaceship Earth?

Designer William McDonough recent article, Carbon is not the Enemy, in the journal Nature states:

“But carbon—the element—is not the enemy. In the right place, carbon is a resource and a tool.”

Don Wilkin of the Soil and Water Conservation District in McHenry-Lake County, Illinois, outlines how to transform farming in his white paper, The New CRP: Restoring the Nation’s Depleted Farmland through Carbon Farming.

Also, worth reading is Kristen Ohlson’s, This Kansas farmer fought a government program to keep his farm sustainable, to see why we must change the way we incentivize farmers.

As I explained in my Nov. 18, 2015 EcoWatch article, Soils and Oceans Omitted from the Paris COP21 Agenda:

In this age of fascination with high technology, we choose to ignore the earthworm (tiller of the soil) and ocean plankton (our indispensable oxygen generator) at our peril. Did you know that two out of every three breaths you take come via phytoplankton? Relying primarily on solar, wind, and hybrids as the solutions to climate change is a path toward disaster.

The good news is that we can help heal our acidic oceans, moderate the planet’s erratic weather, and produce abundant food by refocusing on soil sequestration (which, as a bonus, improves not just soil quality but also water-holding capacity) across farmlands, rangelands and forestlands. 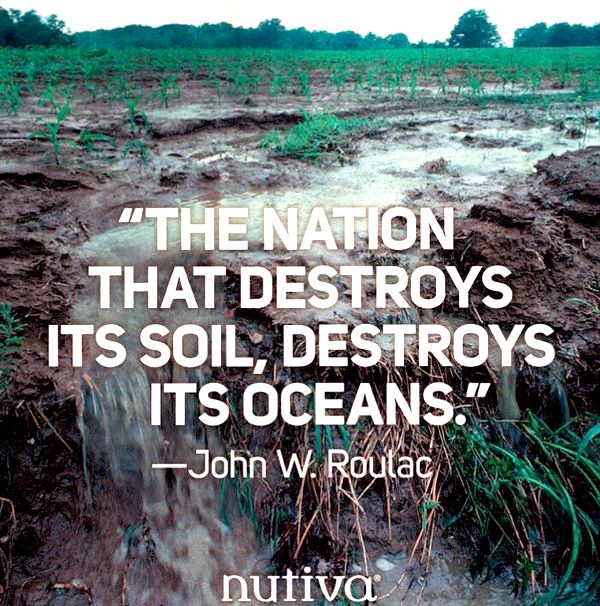 Living in a Biological World

Paying attention to the health of our soils and oceans is now a matter of life and death. That may come as shock to most Americans, as our media and educational systems teach us many things—except how the Earth works. We can learn how to be a doctor (except that most physicians forget nutrition) or a carpenter (but they forget how forests grow) or a farmer (except that they forget the importance of soil health and earthworms) or an urban planner (but they forget how to conserve water). Our American hyper-specialization has yielded technocrats who don’t understand the laws of nature.

“If we put soil health at the center of our agricultural and land management practices, we can take carbon out of the atmosphere, potentially enough to balance our climate. The food movement can become the climate change movement and we can all stand for a healthy future by investing in the soil.”

As for our oceans, if you don’t believe that they’re in trouble, just read this 2010 piece from Germany’s leading magazine Der Spiegel, Phytoplankton’s Dramatic Decline: A Food Chain Crisis in the World’s Oceans.

Per the article’s lead, plankton is “the starting point for our oceans’ food chain. But stocks of phytoplankton have decreased by 40 percent since 1950. … It is an astonishing collapse, say researchers, and may have dramatic consequences both for the oceans and for humans.”

The New York Times also warned of the dying of our oceans in its article Our Deadened, Carbon-Soaked Seas by Richard W. Spinrad, chief scientist at the National Oceanic and Atmospheric Administration, and Ian Boyd, chief scientific adviser to the British government’s Department of Environment, Food and Rural Affairs.

“Ocean and coastal waters around the world are beginning to tell a disturbing story. The seas, like a sponge, are absorbing increasing amounts of carbon dioxide from the atmosphere, so much so that the chemical balance of our oceans and coastal waters is changing and posing a growing threat to marine ecosystems. Over the past 200 years, the world’s seas have absorbed more than 150 billion metric tons of carbon from human activities. Known as ocean acidification, this process makes it difficult for shellfish, corals and other marine organisms to grow and reproduce.”

Biodiversity for a Livable Climate held a fascinating Oceans 2016 program in October 2016 and the have the conference videos available online.

Judy Schwartz, the author of Water in Plain Sight and Cows Save the Planet, cogently stated in her conference presentation, An End to Floods, Droughts and Other Aqueous Misdirections:

“In a healthy ecosystem, when water falls on land it stays in the neighborhood for a long time. It’s performing essential tasks on behalf of living things before finally making its way to the ocean. Because of ways humans have managed land since the beginning of agriculture, especially since the industrial revolution, water now lands on packed and ruined soils, rushing to the seas, leaving floods and droughts in its wake.”

Bren Smith’s keynote talk at the October 2016 Bioneers Conference on GreenWave ocean farming highlighted a revolutionary way to grow ocean kelp and sequester five times the carbon that can be sequestered by land plants. It produces abundant, high-quality food, feed, fuel, and fertilizer. It filters and purifies water, providing habitat for local biodiversity. Last but not least, GreenWave ocean farming creates a shining opportunity for economic democracy by providing a very low-cost entry point for small producers to make a right livelihood while restoring the Earth.

As seen in this excerpt, Popular Science recently featured the GreenWave work:

“Smith’s underwater farms do the opposite. Kelp scrubs nitrogen and phosphorous from the water, helping to protect ocean ecosystems. Kelp also wards off ocean acidification, the result of carbon pollution seeping into the ocean, turning waters more acidic. Kelp soaks up carbon, keeping surrounding waters safe for shellfish and other vulnerable creatures. For this reason, Smith’s farms serve as sanctuaries for crab, shrimp, and other marine species.” 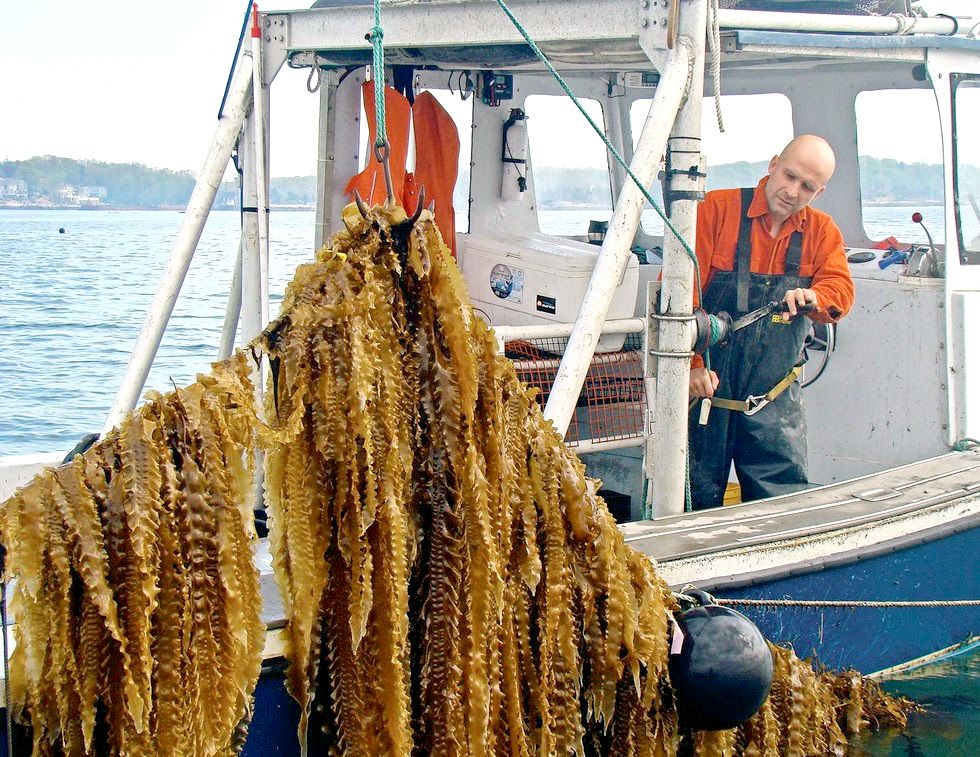 The Bren Smith model is now being implemented on the East Coast, off Connecticut. But, sadly, the red tape of the California Coastal Commission has thus far prevented ocean farming off California. I am optimistic that 2017 will bring major progress and some win-win solutions. California’s entire coastal ecosystem is collapsing, as the once abundant giant kelp forests that extended for miles off our western coastline have been in steady decline with the past hunting of sea otter for their pelts by Russians and Spaniards and the recent deaths among the starfish population, which have contributed to a perfect storm of cascading ecosystem collapse.

In the shallow waters off the unincorporated community of Elk in Mendocino County, a crew from the California Fish and Wildlife Department recently dived to survey the area’s urchin and abalone populations. Instead of slipping beneath a canopy of leafy kelp such as normally darkens the ocean floor like a forest, they found a barren landscape like something out of the film The Lorax.

Ocean farming holds the promise of a restoration of our oceans through working with nature. As we gain more pilot programs on the West Coast, time will tell how soon such a restoration might be achieved. But, as the following statement from the English writer and ecologist Paul Kingsnorth makes clear, we haven’t much time:

“When I look at the state of the world right now, I see an arc bending towards something that dwarfs any parochial concerns about particular presidential elections. … I see a grand planetary shift that has not been seen for millions of years. I see that half the world’s wildlife has gone, and half the world’s forests, and half the world’s topsoil. I see that we have perhaps two generations of food left before we wear out the rest of that topsoil. … I see coming waves of political and cultural turmoil resulting from all of this, which makes me fear for my children, and sometimes for myself.”

Listen Up, Breathers on Spaceship Earth

If you plan to continue breathing in the coming decades, here are some important points to consider:

I’ll close this entreaty with an evocative excerpt from a Walt Whitman poem in Leaves of Grass, “Out of the Rolling Ocean, the Crowd”:

“Return in peace to the ocean, my love; I too am part of that ocean … we are not so much separated; … know you, I salute the air, the ocean and the land …