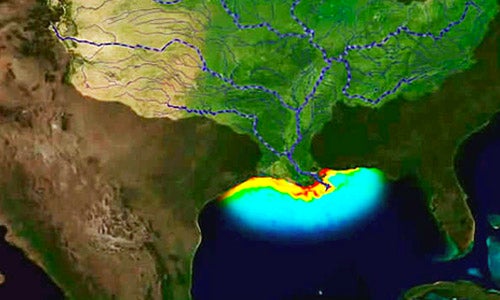 The National Oceanographic and Atmospheric Administration (NOAA) released Thursday its annual forecast for the size of the Gulf of Mexico “dead zone“—an area of coastal water where low oxygen is lethal to marine life. They say we should expect an “average year.” That doesn’t sound so bad, but as we wrote last year, the dead zone average is approximately 6,000 square miles or the size of the state of Connecticut. Average is not normal.

The hypoxic zone in the Gulf of Mexico is the second only in the world to the flush of toxins from Eurasia that pollute the Baltic Sea. Hypoxic zones occur naturally wherever major rivers meet the ocean. However, human activity has increased their area, and these persistent dead zones lead to health threats, economic losses and diminished food supplies. Photo credit: NOAA

This is especially troubling when we know that solutions exist for reducing agricultural pollution, which contributes to the dead zone. And for many years, there’s been a lot of effort dedicated to reducing the dead zone’s massive footprint.

The Dead Zone Starts on the Farm

Dead zones—also known as hypoxic zones—can occur naturally, but human activity perpetuates their presence. Hypoxia in the ocean results from low dissolved oxygen, a state that occurs when excess pollutants, such as nitrogen and phosphorus, enter bodies of water. These pollutants have various natural and man-made sources, but they are critical nutrients for plant growth and thus the active ingredients in fertilizers applied to farm fields.

The movement of water causes nitrogen to “leach” through the soil or “run off” into bodies of water, while phosphorus most commonly escapes from farm fields with sediment and soil erosion. However they get into water, these pollutants make delicious food sources for algae, which “bloom” as a result of the buffet. Dead algae sink and decompose in water, which depletes oxygen, suffocating other marine organisms.

The second largest dead zone in the world is the one predicted Thursday, in the Gulf of Mexico. The Mississippi River empties into the Gulf and many other bodies of water that run through the Corn Belt and other major agricultural regions of the U.S. feed the Mississippi.

It has been a wet spring across most of the U.S., including the Midwest and it is true that the amount of rainfall (and thus water moving through and over the soil) impacts the size of the dead zone from year to year. But so do the practices on farms and these are much more within our control than the rain.

Myth Busting: Fertilizer is Only One Part of a Bigger Farming Problem

Every single article I read in news about the dead zone, algal blooms in Lake Erie or polluted drinking water in Des Moines, seems to count the number one evildoer as fertilizer, particularly farmers who are applying too much of it. As someone who researched Midwest agriculture while living in Iowa for several years, this drives me a little crazy because the gross oversimplification misses the bigger farming problem, of which the amount of fertilizer is just a part. A major issue with our farming system today, especially in the Corn Belt, is that the primary crop only grows from April/May until September/October when harvested. The rest of the fall, winter and spring leave the soil bare and susceptible to phosphorus and nitrogen loss.

One proposed solution to the runoff problem is what’s known as the “4R” strategy—using fertilizer at the right rate, the right time, the right place and the right source. There is no doubt that such practices can help reduce water pollution and dead zones, but not enough from my perspective, especially given the disproportionate emphasis placed on such approaches as a “silver bullet.”

A more ecological approach to farming—mainly, finding ways to protect the soil all year, including perennial crops, agroforestry or cover crops—could be a highly effective strategy to reducing water pollution and ultimately the size of the dead zone. However, we currently discourage farmers from applying their highest management skills, due to a history of farm policies (from crop insurance to other market supports) that incentivize annual cropping patterns focused on short-term results.

This is Not a Problem Disappearing Anytime Soon

Along with scientists and other partners, the U.S. Environmental Protection Agency launched a task force in 1997 to deal with the dead zone issue and coordinate a plan to reduce its effects. Through that task force, the goal of limiting the dead zone size to roughly 3,000 square miles was determined. Again, this year’s prediction is for 6,000 square miles (a prediction that comes from several research groups or an ensemble of models, common in weather forecasting). The actual size of the dead zone will be monitored by NOAA and partners in late July and officially released in early August.

The news of a dead zone predicted to be more than double the designated goal is why an “average” forecast should actually be alarming, particularly after two decades of efforts to make the problem better. Certainly this is an issue that has not and will not disappear overnight and there are many farmers trying to improve the situation. However, until we start to have an honest discussion that includes policy change toward perennializing farming and moving beyond fertilizer management, I don’t expect to see better than average dead zone forecasts anytime soon.

Andrea Basche is a Kendall Science Fellow in the Union of Concerned Scientist‘s food and environment program.