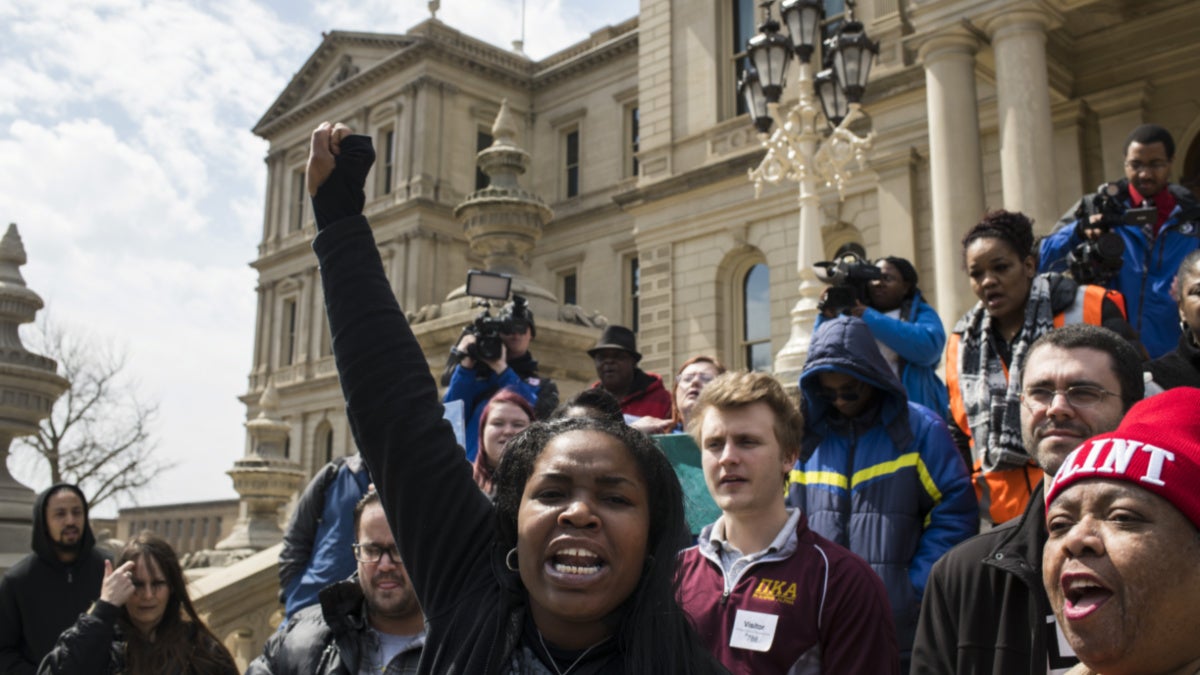 Ariana Hawk of Flint, Michigan, leads a chant during a protest over unsafe drinking water on the steps of the Michigan State Capitol on April 11, 2018 in Lansing, Michigan. Brittany Greeson / Getty Images

Reports that the new coronavirus is disproportionately killing African Americans in the United States are no surprise to the country’s public health researchers. Numerous examples, from polluted water in Flint, Michigan, to parasites like hookworm in Alabama, have long shown that African Americans are more exposed to environmental dangers and ill-health than white Americans.

But a study into one of the most enduring of these threats — lead poisoning among children —provides a new measure of what many say is the toxic effect of systematic racism in the US.

There is no safe level of lead in the blood, which means even trace amounts can damage brain cells. But it is particularly dangerous for children in their pre-school years, when it can disrupt brain development. Overall, the US Centers for Disease Control (CDC) estimates that around 2.5% of children aged between 0 and six in the country have an “elevated blood lead level”.

Using publicly available data collected by the CDC from a representative sample of thousands of children aged one to five over an 11-year period, the study, published in February by the International Journal of Environmental Research and Public Health, found that black children living below the poverty line are twice as likely to have elevated levels of lead in their blood than poor white or Hispanic children.

The CDC did not offer a comment on the new study, on the grounds that it was not involved in writing it.

The Danger of Being African American

Statistically, the increased risk of lead poisoning associated with being black persists even when you correct for all other factors, from poverty to education levels to the presence of smokers in the home, to quality of housing.

“A lot of people had been saying: ‘oh black children are just more at risk because they’re more likely to be poor,'” said study co-author Deniz “Dersim” Yeter, an independent academic and undergraduate nursing student in Kansas. “Yeah, poverty’s a problem, but it’s nothing compared to being a black child in America.”

Yeter was “astounded” by the results of their three-year analysis. “I knew it was bad, but I was expecting something like a marginal increase, something statistically significant, but … not two to six times higher,” they told DW. “That is obscene.”

The study includes some surprising conclusions: The social condition of being African American is a bigger risk than living in an old house. In other words, black children living in buildings built between 1950-1977 are six times more likely to have elevated levels of lead in their blood than white children living in a building of that era.

That date is important. The US began putting restrictions on the lead content of paint in 1977. But leaded paint was never systematically removed from old buildings, and the US Department of Housing estimates that over 3.6 million homes housing children still contain lead hazards.

“It’s so bad,” Yeter said. “It deteriorates, it’s little pieces of dust, you inhale it, kids touch stuff, touch their mouths, absorb it. [Before the 1950s] it used to be so bad that kids would go into seizures, go to the hospital and die, because there was so much lead in their blood.”

The Consequences of ‘Redlining’

The figures Yeter unearthed aren’t surprising to community workers in areas where lead poisoning is just one of many health hazards that African Americans face.

“You just have look around you,” said Kinzer Pointer, pastor and health campaigner in an overwhelmingly African-American community in Buffalo, New York, a city where most of the housing is older than 1978 and 40% of children tested in 2016 had an elevated blood lead level.

Buffalo is a prime example of the effects of “redlining” — the exclusion of minorities in the US from everything from insurance, to grocery stores — which offers a clue to how racism leads to poor health.

Pointer said that in the neighborhood he serves, the nearest supermarket selling fresh fruit and vegetables is over five miles away, and 60% of people don’t own their own transport. “People live on fast food,” he said.

Redlining also extends to mortgages and home ownership — the US census shows that only around 42% of African Americans own their homes, compared to 68% of white Americans.

Rahwa Ghirmatzion, director of People United for Sustainable Housing in Buffalo, explained that when renters receive a letter from health authorities warning their building is contaminated, “the expectation is for them to either move … or get their landlord to remediate the issue.”

Confronting your landlord can be more fraught for black people: A 2012 study in the American Journal of Sociology showed that African Americans face disproportionately higher eviction rates than whites in the same income brackets. And moving voluntarily may mean breaking a lease and losing a deposit, making it still harder to afford a lead-free home.

David Rosner, co-author of the 2014 book Lead Wars, which traces the post-war history of lead poisoning, said racism has always been part of why lead poisoning has been tolerated.

As he explained, after the war, the Lead Industries Association even tried to blame black parents for letting their children eat paint: One 1956 letter showed the LIA arguing to government that lead poisoning was a problem of “educating the parents, but most of the cases are in Negro and Puerto Rican families, and how does one tackle that job?”

With their study, Yeter wants to show that hidden, structural racism can be just as dangerous, and that “color-blind” public health screening only exacerbates the problem.

Currently, blood lead screening is recommended (by organizations like the American Academy of Pediatrics) when children live in old buildings or belong to a certain economic class. Yeter says not addressing race too, blinds authorities to the endemic discrimination.

“If you’re ignoring black race as a leading risk factor — you’re leaving so many black kids at far greater risk out of the local, state, and federal response.” He added: “To act like there’s no politics behind people being at risk, or what causes that, or how to solve that… it’s political!”