What You Can Do to Make Your Clothing Ocean Safe 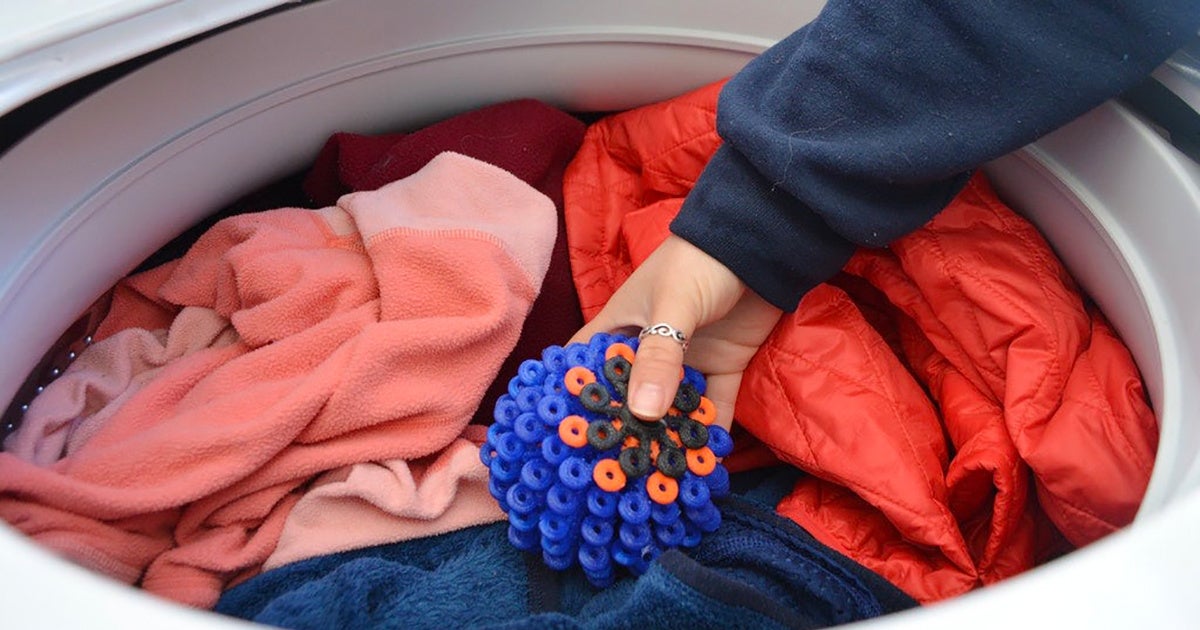 The Cora Ball can be dropped inside a washing machine to snag free-floating microfibers before they go down the drain. Rozalia Project

As Fashion Week kicks off in New York City Thursday, it’s a good time to think about the impact that our clothing has on the environment.

In recent years, increasing attention has been paid to the problem of microplastics, which enter rivers and oceans, accumulate toxins and work their way up the marine food chain from small fish to us.

One important source of microplastic pollution are plastic microfibers that rub off of synthetic fabrics like polyester in the washing machine and are too small for water treatment plants to block, according to a helpful video explaining the problem from The Story of Stuff Project.

There are about 1.4 million trillion of these fibers in the ocean so far, which is about 200 million per person, The Story of Stuff Project said.

While it has been raising awareness about the issue for the last five years, The Story of Stuff Project said that the clothing industry overall has been dragging its feet to acknowledge the problem, let alone tackle it.

However, there have been some attempts by industry players to solve this problem from the sewing machine to the washing machine.

On the production end, most solutions are still in the research stage. Clothing manufacturers want to know which synthetic fabrics shed the most before they put money into mitigating the problem, and the jury is still out on that question, Ensia reported in an in-depth look at the issue in July.

The American Association of Textile Chemists and Colorists (AATCC) and ASTM International are working with the European Outdoor Group (EOG) to determine how many fibers different blends release into washing machines.

“Is washing even the biggest leakage point? We don’t know,” chair of an AATCC microfiber working group Heather Shields told Ensia. “If you’re wearing a backpack every day, how is that going to shed fibers from your fleece jacket?”

Other companies are moving forward on potential solutions.

Textile Mission unites outdoor brands Vaude, Adidas and Polartec with World Wildlife Fund Germany in a quest to develop fabrics that would shed less and technologies that would catch more microfibers in waste water.

But experts warn that companies working out solutions should be careful not to cause new problems.

“There are some roads that we don’t want to go down; for example, the idea of a chemical coating to prevent microfiber release could cause more problems than it solves if those chemicals are also bad for the environment and human health,” The Story of Stuff Project warned, according to Mother Nature Network.

And Ocean Conservancy’s Trash Free Seas program director Nick Mallos told Ensia it was risky to look to different kinds of plastics for a solution, since it is hard to know how they would impact marine life.

“When we think about solutions for the ocean, at present biodegradable bioplastics are not a solution,” Mallos said.

“It would be really great if the washing machine companies would get on board and come up with a filter to trap these microfibers,” Wessel said.

Some Japanese washing machine brands are doing this, according to Ensia, but U.S. manufacturers have been less proactive.

“[The Association of Home Appliance Manufacturers] (AHAM} believes that this issue would be best managed early in the textile life-cycle,” AHAM spokesperson Jill Notini told Ensia.

The Story of Stuff Project pointed out that there is an engineering problem in requiring all 89 million washing machines currently in use in the U.S. to be retrofitted with filters, according to Mother Nature Network.

But while big companies drag their feet or work out scalable solutions, there are things that everyday clothes wearers can do, Mother Nature Network suggested.

You can choose natural fabrics like cotton or silk as much as possible, you can wash synthetic clothes as rarely as possible, wearing cotton t-shirts under synthetic shirts or dresses, for example.

You can purchase innovative products that allow you to catch microfibers without remodeling your washing machine.

The Guppyfriend is a bag you can wash your synthetic clothing in that will collect the fibers it sheds in its hems for you to dispose of properly afterwards.

The Cora Ball is a plastic ball you can throw in the wash that mimics the filtering ability of coral and collects microfibers before they go down the drain.

And of course, you can join with The Story of Stuff Project to call on the fashion industry directly to put more resources into stopping the problem at its source and developing clothing that doesn’t shed.