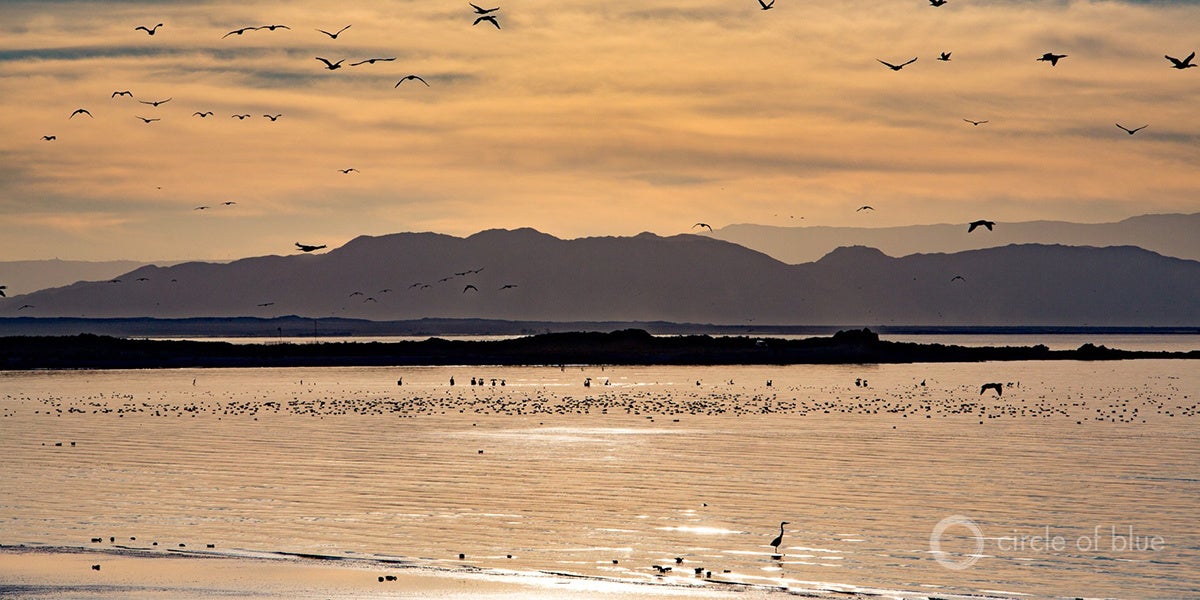 State of the State speeches are where governors sketch their legislative priorities and report on the overall health of their dominions. The state of the state is almost always “strong” and water issues are occasionally mentioned.

Below are summaries of the governors’ references to water, climate and the environment.

This post will be updated throughout speech season, which concludes on March 12 with Gov. John Bel Edwards of Louisiana.

Gov. Kay Ivey, a Republican who took office last year after the previous governor resigned, did not mention water or the environment, other than to say that state agencies have improved their communication during disastrous weather.

Because she grew up in a small town in a rural county, Ivey said that rural Alabama is “central to [her] legislative agenda.” Broadband and health services were two items mentioned.

As in past years, Gov. Doug Ducey used his speech to take a jab at a neighbor’s water policies.

“Because in Arizona, we know the recipe for success,” the first-term Republican said. “Lower taxes. Light regulation. Great public schools. Superior quality of life. And responsible water policies that will protect us from sharing in California’s water crisis.”

Not all is harmonious in his own house, though. Ducey hinted at the power struggle between two agencies—the Central Arizona Water Conservation District, which manages the state’s main Colorado River canal, and the Arizona Department of Water Resources, the primary state water agency—over which will take the lead on state water policy.

Ducey implied that the agencies should stop quarreling and mimic earlier state leaders who put in place Arizona’s landmark groundwater management law in 1980.

“We must follow their lead and put forward responsible policies that will ensure Arizona speaks with one voice to secure the state’s future for generations to come.”

Gov. Butch Otter, in his last State of the State, dedicated a not-insignificant portion of his speech to recapping the year’s precipitation, which was the 12th wettest on record in Idaho. Otter, a Republican, also noted an agreement to conserve water in the Eastern Snake Plain Aquifer.

“As I said, it was a big year for water, whether it was falling from the sky or being recharged into Idaho’s largest underground reservoir. Runoff from last year’s snowpack on top of saturated soils required careful, coordinated management of dams and reservoirs.

The effort successfully reduced flooding and ensured that dam structures were secure. Meanwhile it provided a full allocation of water in the Boise River and Snake River reservoirs and plenty of carryover for use in 2018.

Just as importantly, for the first time since the 1950s we put more water back into the Eastern Snake Plain Aquifer than we pumped out in 2017. Water levels in the Lake Erie-sized aquifer had been dropping at an average rate of 215,000 acre-feet per year for 60 years.

But last year the Idaho Water Resource Board worked with private canal companies to recharge 317,000 acre-feet of water. A landmark settlement agreement between surface water users and ground water users resulted in a net gain of another 200,000 acre-feet.

Along with the wet weather, the result was a 660,000-acre-foot increase in water storage in the aquifer. Without our work together on these issues it would have been impossible to realize these historic advances in managing and protecting our most precious and fragile natural resource.”

As he did in his first State of the State last year, Gov. Eric Holcomb, a Republican, spoke about the need to repair Indiana’s water systems. A priority, he said is to identify the highest needs for utilities, which a state agency will help accomplish over the next two years.

We’re eager to work with lawmakers to get the ball rolling.

In the meantime, I’ll direct the Indiana Finance Authority to designate half a million dollars each of the next two years for development of asset management plans for high-need water and wastewater utilities.”

The former lieutenant governor, Gov. Kim Reynolds, gave her first State of the State address. Like her predecessor, Reynolds, a Republican, stressed the need for cleaner waters. A keystone in the nation’s agriculture industry and a state within the Mississippi River watershed, Iowa has been a battleground for nitrate pollution for years.

My hope is that a water quality bill is the first piece of legislation I sign as governor.

Let me assure you, passage of this monumental legislation does not mean the water quality discussion is over; rather it ignites the conversation to implement and scale practices that will continue to make an impact on water quality.”

In his final State of the State, Gov. Sam Brownback was dreaming dreams. The two-term Republican, ready to leave Kansas for a Trump administration post, had visions of renewable energy and sustainable groundwater use.

“I dream of a future Kansas exporting wind electricity across America. A Kansas known as the Renewable State. It could well be that in the future, those who have the wind resource will flourish like those who now have oil. We are growing as an energy state.

Dream with me of an Ogallala Aquifer that never runs dry because the use is sustainable. Of our reservoirs dredged, renewed and supplying the water we need in times of severe drought. Of us having a legal, binding allotment of water from the Missouri River and of an Arkansas River with water in its whole course.”

Gov. Andrew Cuomo, a Democrat, said that lawmakers must recognize the risks of water pollution.

The two-term Democrat outlined four water priorities: cleaning up a nearly four-mile-long plume of groundwater at a former Northrop Grumman and Naval base that is contaminated with 1,4-dioxane and other chemicals; suing the U.S. Environmental Protection Agency to continue the PCB cleanup in the Hudson River; halting the spread of harmful algal blooms; and addressing polluted discharges at the Niagara Falls wastewater treatment plant.

“Second, we face new challenges threatening our safety and quality of life: terrorism, climate change, environmental threats, including to our drinking water, and the growing opioid epidemic, a scourge across our state, that claimed more than 3,000 lives last year…

The growing concentration of chemicals and pollution in some areas is literally poisoning the water. In the beautiful lakes upstate, toxic algae is spreading. On Long Island, the Grumman plume carries 30 years of industrial stains and contaminants.”

Gov. Jay Inslee, a two-term Democrat, told lawmakers that they “have a duty to focus on our legacy, which can be long.” Voting rights, internet access, education, mental health, birth control, opioids—all worthy and weighty topics on their own—were lead-ins for Inslee’s big pitch: that Washington state ought to begin taxing carbon emissions.

Revenue from a carbon tax, which would start at $20 per ton under the governor’s plan and bring in an estimated $1.5 billion in the first two years, could help Washington in a number of ways, Inslee said. On the environment he mentioned upgrading irrigation and water utility systems and reducing pollution in waterways.