The Latest Books and Reports Covering Environmental Racism and Justice 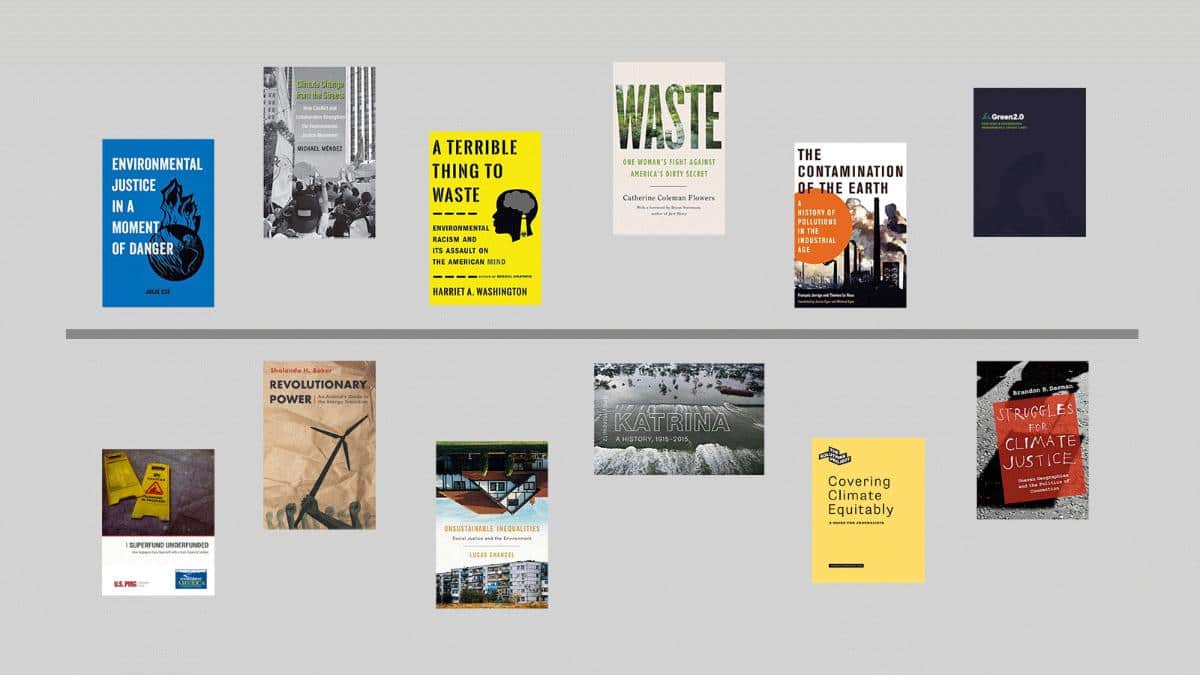 The COVID-19 pandemic has confirmed again a fundamental truth about the Anthropocene: When disaster strikes, the vulnerable take the hardest punches. Communities of color have suffered much higher rates of infection, hospitalization, and mortality, both because they are disproportionately represented in frontline service positions and because their access to routine healthcare is more limited.

This pattern has long been observed in studies of environmental and climate justice, as the titles in this month’s bookshelf show. Vulnerable communities of color face more and more serious exposure to environmental hazards and have more limited access to economic, social, and political remedies.

In addition to the overviews and historical and regional case studies illustrating and documenting this pattern, this bookshelf feature includes non-governmental organization reports detailing the poor performance of EPA’s Superfund program; updating the results of efforts by environmental NGOs and foundations to diversify their organizations; and describing best practices for “covering climate equitably.”

As with previous YCC bookshelves, the abbreviated descriptions of the books and reports listed below are drawn from copy provided by their publishers or issuing organizations. When two dates of publication are listed, the second refers to the release of the paperback edition.

Environmental Justice in a Moment of Danger, by Julie Sze (University of California Press 2020, 160 pages, .95 paperback)

We are living in a precarious environmental and political moment. In the US and around the world, environmental injustices have manifested across racial and class divides in devastatingly disproportionate ways. What can we learn from environmental justice struggles? Environmental Justice in a Moment of Danger examines mobilizations and movements, from protests at Standing Rock to activism in Puerto Rico in the wake of Hurricane Maria. Environmental justice movements fight, survive, love, and create in the face of violence that challenges the conditions of life itself. Exploring dispossession, deregulation, privatization, and inequality, this book is the essential primer on environmental justice, packed with cautiously hopeful stories for the future.

From injuries caused by lead poisoning to the devastating effects of atmospheric pollution, infectious disease, and industrial waste, Americans of color are harmed by environmental hazards in staggeringly disproportionate numbers. This systemic onslaught causes irreparable physical harm to millions of people. But these deadly environments create another insidious and often overlooked consequence: robbing communities of color of intellectual power. Science writer Harriet A. Washington investigates heavy metals, neurotoxins, bad nutrition, and even pathogens as agents influencing intelligence to explain why communities of color are disproportionately affected. A Terrible Thing to Waste is sure to outrage, transform, and inspire debate.

Hurricane Katrina made landfall in New Orleans on August 29, 2005, but the decisions that caused the disaster extend across the twentieth century. After the city weathered a major hurricane in 1915, its Board believed that developers could safely build housing in lowlands. When the flawed levee system surrounding the city and its suburbs failed, these were the neighborhoods that were devastated. Andy Horowitz investigates the response to the flood, and he explores how the profits and liabilities created by Louisiana’s oil industry have been distributed unequally. Laying bare the relationship between structural inequality and physical infrastructure Katrina offers a chilling glimpse of the future disasters we are already creating.

Environmental planner Michael Méndez tells a timely story of people, place, and power in the context of climate change and inequality. He explores the perspectives and influence low income people of color bring to their advocacy work on climate change. In California, activist groups have galvanized behind issues such as air pollution, poverty alleviation, and green jobs to advance equitable climate solutions at the local, state, and global levels. Arguing that environmental protection and improving public health are inextricably linked, Mendez contends that we must incorporate local knowledge, culture, and history into policymaking to fully address the global complexities of climate change and the real threats facing our local communities.

Can we fight poverty and inequality while protecting the environment? The challenges are obvious. To rise out of poverty is to consume more resources, almost by definition. And many measures to combat pollution lead to job losses and higher prices that mainly hurt the poor. In Unsustainable Inequalities, economist Lucas Chancel confronts these difficulties head-on. She begins by reviewing the problems. Human actions have put the natural world under unprecedented pressure. The poor are least to blame yet suffer the most. But policy pioneers worldwide are charting a way forward. The rare work that combines the skills of an economist with the rigor of a philosopher, Unsustainable Inequalities shows that there is still hope.

In September 2017, Hurricane Maria hit Puerto Rico, completely upending the energy grid of the brown and black US citizens who call the island home. Revolutionary Power arms those made most vulnerable by our current energy system with the tools they need to remake the system in the service of their humanity. In it, Shalanda Baker tells the stories of those who have been left behind, drawing from her experience as an energy-justice advocate, a lawyer, and a queer woman of color to inspire activists working to build our new energy system. This unique moment in history provides an unprecedented opening for a deeper transformation of the energy system, and, thus, an opportunity to transform society. Revolutionary Power shows us how.

The Contamination of the Earth: A History of Pollutions in the Industrial Age, by Francois Jarrige and Thomas Le Roux (The MIT Press 2020, 480 pages, .95)

The Contamination of the Earth offers a social and political history of industrial pollution, mapping its trajectories over three centuries, from the toxic wastes of early tanneries to the fossil fuel energy regime of the twentieth century. The authors describe how, from 1750 onward, polluted water and air came to be seen as inevitable side effects of industrialization. By the 19th century, pollutants became constituent elements of modernity. The 20th century saw new and massive scales of pollution, in part due to a lifestyle defined by consumption. In the 1970s, pollution became a political issue, but efforts to regulate it often fell short. Viewing the history of pollution though a political lens, the authors offer lessons for the future of the industrial world.

MacArthur “genius” Catherine Coleman Flowers grew up in Lowndes County, Alabama, a place often called “Bloody Lowndes” because of its violent, racist history. Once the epicenter of the voting rights struggle, today it’s Ground Zero for a movement that is Flowers’s life’s work. It’s a fight to ensure human dignity through a right most Americans take for granted: basic sanitation. Too many people, especially the rural poor, lack an affordable means of disposing cleanly of the waste from their toilets. Flowers calls this America’s dirty secret. In Waste, Flowers tells the story of the systemic prejudices that foster these Third World conditions. She shows how sanitation is too big a problem to ignore as climate change brings sewage to more backyards.

Superfund Underfunded: How Taxpayers Have Been Left with a Toxic Financial Burden, by Jillian Gordner (US PIRG/Environment America 2021, 174 pages, free download available here)

In 1980, Congress passed the Comprehensive Environmental Response, Compensation and Liability Act, informally called Superfund, to hold polluters responsible for cleaning up contaminated waste sites or clean up the sites themselves if no responsible party could afford the cleanup. Originally funded by a tax on petro-chemical industries that expired in 1995, money for the Superfund program now comes primarily through general revenues. But as appropriations decreased over the past two decades, cleanup has slowed. From 1999 to 2020, annual appropriations decreased by more than a billion dollars. In FY 2020, EPA started or completed the fewest cleanup actions in the history of the Superfund program—putting more people at risk.

How should we understand campaigns for climate justice? What do these initiatives share, and what differentiates them? What, in fact, does “climate justice” mean in these contexts? And what do the framing and progression of such efforts in different settings suggest about the broader conditions that produce and sustain climate injustice, how those conditions could be unmade, and what might take their place? In Struggles for Climate Justice, environmental studies professor Brandon Derman approaches these questions from an interdisciplinary perspective accessible to graduate and advanced undergraduate students as well as scholars of geography, social movements, environmental politics, policy, and socio-legal studies.

For the fourth year in a row, Green 2.0 – an independent advocacy campaign to increase racial and ethnic diversity within the mainstream environmental movement – presents diversity data from the movement’s most influential non-profit organizations (“NGOs”) and foundations. The 2020 Green 2.0 Transparency Report Card reflects data collected from the 40 largest NGOs and 40 largest foundations on the number of women and people of color on their full-time staffs, senior staffs, and boards. This year’s results are colored by two major national news events – the COVID-19 pandemic and the nationwide protests over racial justice – that likely influenced the participation we received. Green 2.0 hopes to add more groups to this list in future years.

Years of environmental justice research reveals that people of color and low-income communities are disproportionately affected by pollution and climate change. But when The Solutions Project and Conspire for Good reviewed over 2,300 renewable energy articles in 2019, they found that only 2% of the articles referenced communities of color, down from 7% in 2018, and only 6% of the articles talked about issues of equity or justice. Covering Climate Equitably: A Guide for Journalists includes tips on looking at potential stories through an equity lens and handling some common challenges. It also includes a glossary of terms, guidance on language choices, lists of sources and contacts, and case studies that show how to produce outstanding stories.