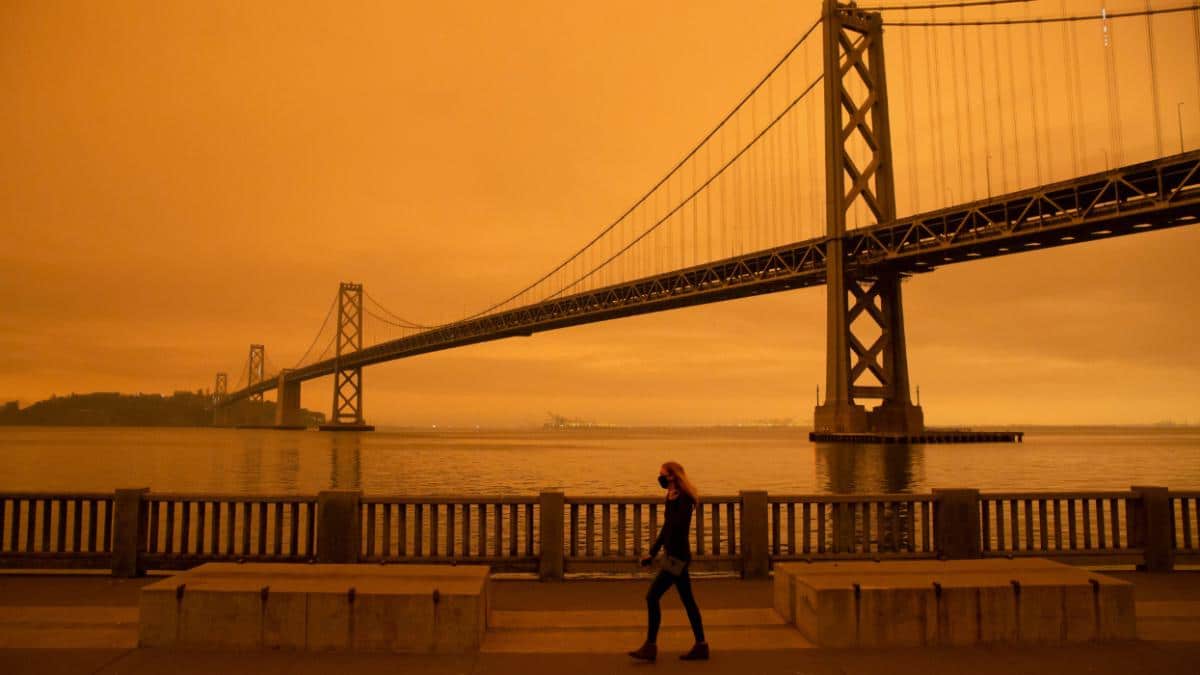 A woman walks along The Embarcadero under an orange smoke-filled sky in San Francisco, California on September 9, 2020. Brittany Hosea-Small / AFP / Getty Images

The research, published in Nature Communications on Friday, found that wildfire smoke could be up to 10 times more harmful than other sources of air pollution, such as from vehicles or industry.

“We know wildfires are going to become more extreme, due to climate change,” Rosana Aguilera, study co-author and postdoctoral scholar at the University of California, San Diego’s Scripps Institution of Oceanography, told The Guardian. “And it’s important that we start to reckon with the health effects of that.”

This isn’t the first study to suggest that wildfire smoke might be more harmful than other forms of air pollution, the authors noted. Animal studies have suggested the same thing.

Mary Prunicki, a Stanford air pollution researcher who was not part of the study, told The Guardian that evidence also suggested that wildfire smoke could exacerbate heart conditions and respiratory ailments.

She explained that since wildfires engulf homes and businesses, they emit fumes that contain metals, plastic and cleaning supplies. Large fires also suck smoke high into the atmosphere, where it lasts longer and combines with oxygen to become more dangerous.

“We’re pretty aware of the physical costs of wildfire, in terms of firefighting costs and damage to property,” Tom Corringham, a study co-author also at Scripps, told NPR. “But there’s been a lot of work that has shown that the health impacts due to wildfire smoke are on the same order of magnitude, or possibly even greater, than the direct physical cost.”

The study comes as this problem is only getting worse. While particulate matter air pollution has been decreasing across most of the U.S. thanks to stricter environmental regulations, that has not been the case in wildfire-prone areas, the study found. Wildfires will likely increase as long as the climate crisis persists. In 2020, California experienced six of its largest fires on record, the Los Angeles Times reported. Those fires choked the Western U.S. with smoke, in some places for weeks. An NPR analysis found that one in seven West Coast residents experienced at least one day of unhealthy air quality last year.

Unfortunately, wildfire smoke is not as easy to regulate as tailpipe or power-plant emissions. Corringham called for providing low-income households with money for air purifiers. But he also suggested a longer-term solution.

“Anything we can do today to reduce greenhouse gas emissions and stabilize the global climate system will have significant benefits,” he told NPR.