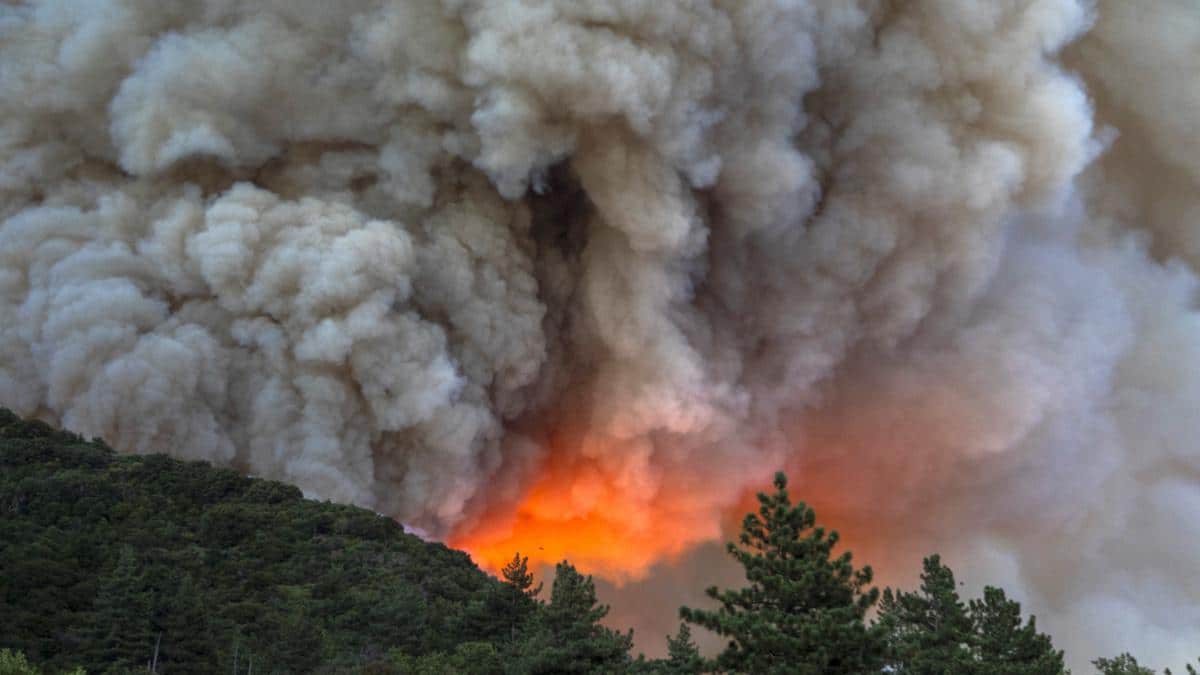 Flames and heavy smoke are seen from the Apple Fire on August 1, 2020 in Cherry Valley, California. David McNew / Getty Images

By Brett B. Palm

The year 2020 will be remembered for many reasons, including its record-breaking wildfires that turned San Francisco’s skies an apocalyptic shade of red and blanketed large parts of the West in smoke for weeks on end.

While the smoke can make for beautiful sunsets, it can also have dire consequences for human health.

I am an atmospheric chemist, and the atmosphere is my laboratory. When I look at the sky, I see a mixture of many thousands of different chemical compounds interacting with each other and with sunlight.

The reactions and transformations in the atmosphere cause wildfire smoke to change dramatically as it travels downwind, and studies have shown that it can grow more toxic as it ages. In order to accurately forecast the effects of wildfire emissions on downwind populations and issue more-targeted air quality warnings as wildfire seasons worsen, we have to understand which chemicals are being emitted and how smoke changes with time.

To figure that out, my colleagues and I flew airplanes into the smoke plumes of some of the West’s large wildfires.

How We Study Wildfires

Large wildfires and the way wind carries their smoke cannot be easily replicated in a laboratory. This makes them difficult to study. One of the best ways to learn about real wildfire smoke chemistry is to sample it directly in the atmosphere.

In 2018 and 2019, my colleagues and I crisscrossed the sky over active wildfires in specialized airplanes loaded with scientific instruments. Each instrument is designed to sample a different part of the smoke, often by literally sticking a tube out the window. 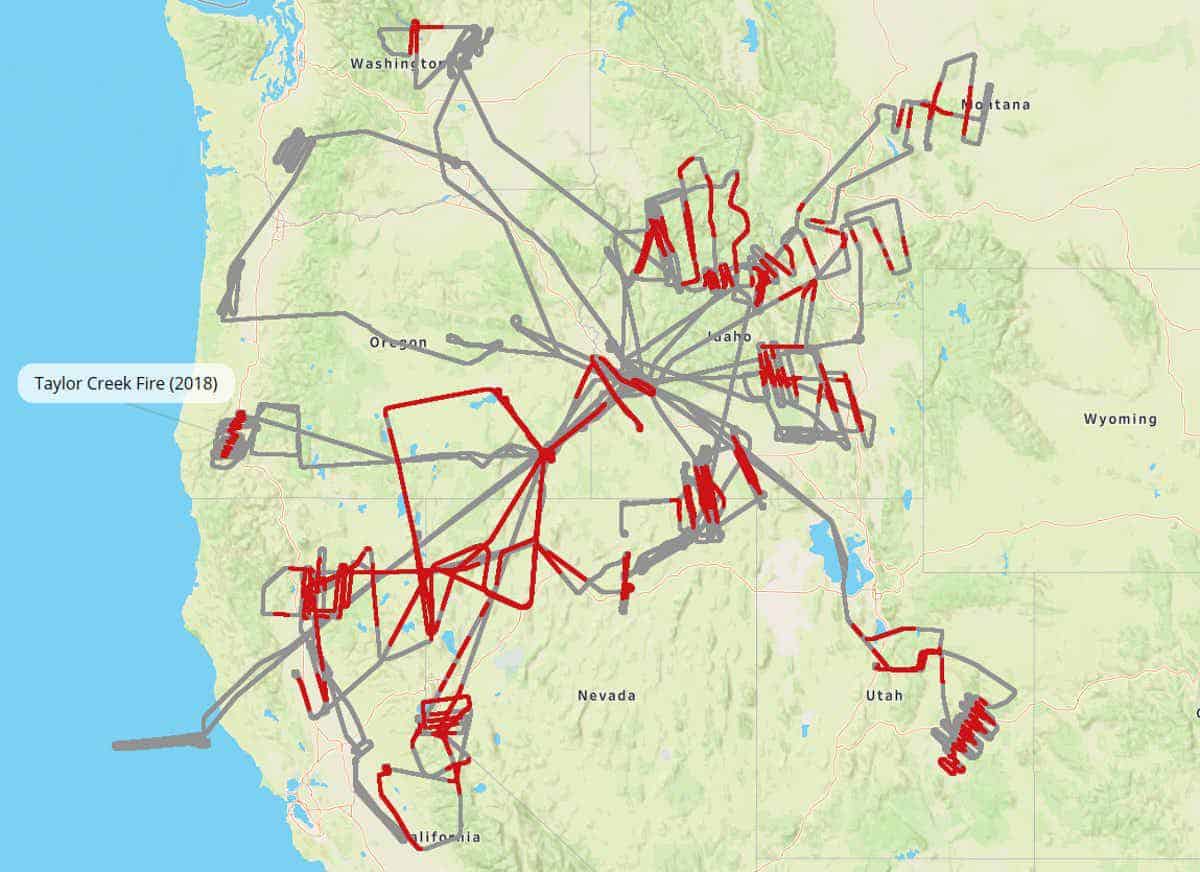 To sample smoke as it moves downwind, scientists flew back and forth across smoke plumes. The gray lines are the flights from 2018. They turn red where the path crossed a smoke plume. Brett Palm/University of Washington, CC BY-ND 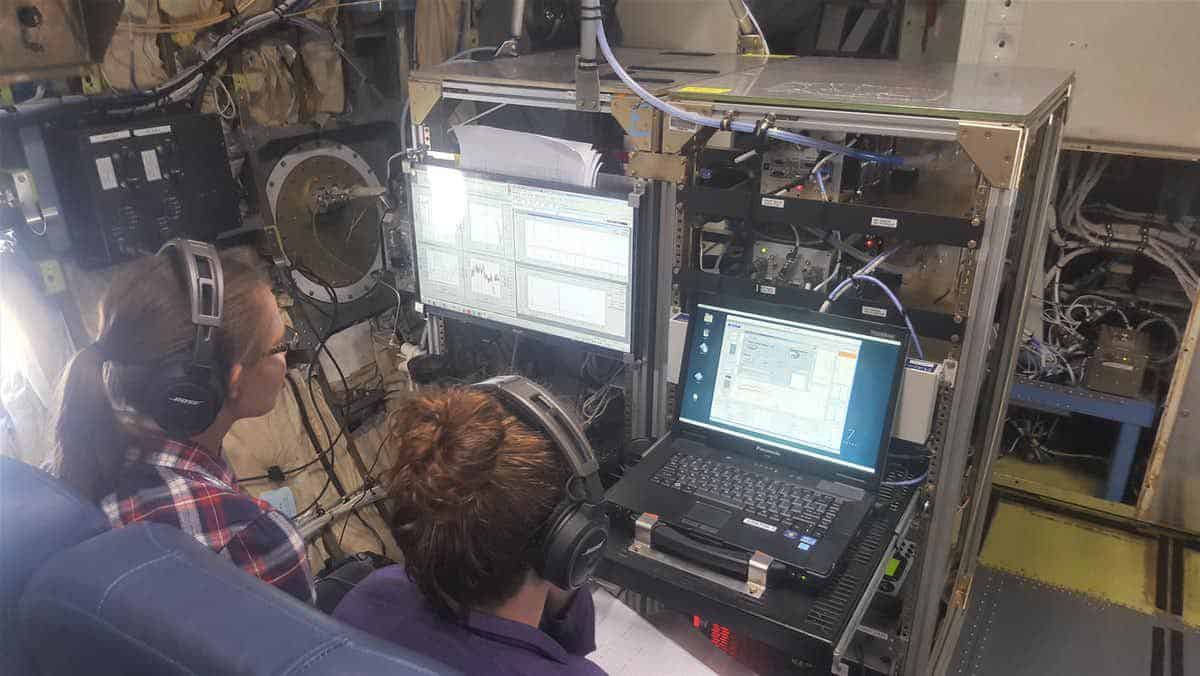 Scientific aircraft used for these experiments are filled with instruments that measure wildfire smoke in different ways. Brett Palm/University of Washington, CC BY-ND

Wildfire smoke is far more complex and dynamic than meets the eye. It contains thousands of different compounds, most of which are molecules containing various amounts of carbon, hydrogen, nitrogen and oxygen atoms. There are gases (individual molecules) as well as particles (millions of molecules coagulated together).

No single instrument can measure all of these molecules at once. In fact, some specific compounds are a challenge to measure at all. Many scientists, including myself, dedicate their careers to designing and building new instruments to improve our measurements and continue to advance our understanding of the atmosphere and how it affects us. 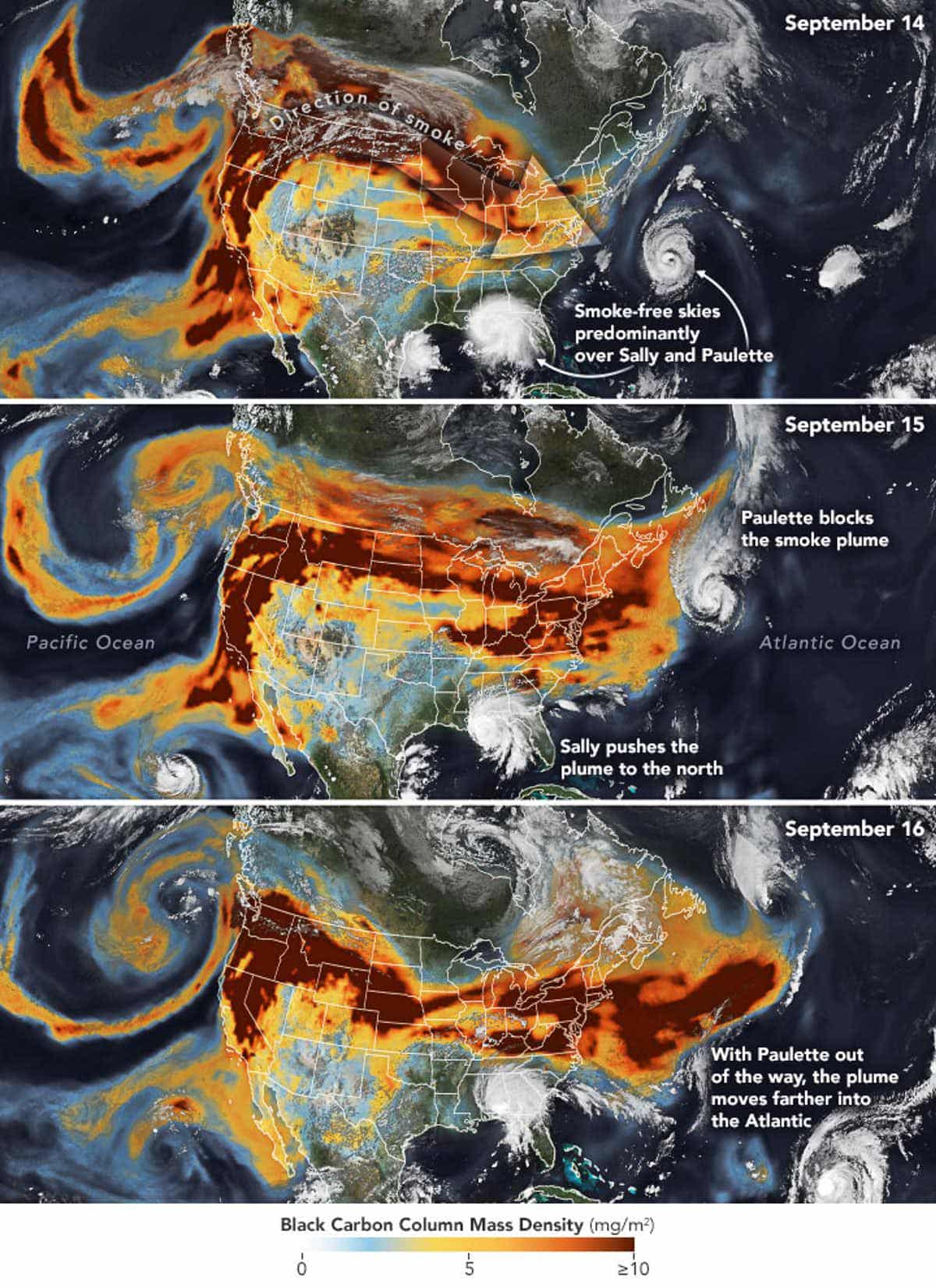 In newly published research from the 2018 wildfires, my colleagues and I showed how the smoke particles changed rapidly as they were carried downwind.

Some of the particles were evaporating into gases, similar to a rain puddle evaporating into water vapor when the Sun comes out. At the same time, some of the gases in smoke were going through reactions to form new particles, similar to water vapor condensing to form a cloud or dew droplets. Meanwhile, chemical reactions were occurring, changing the molecules themselves.

As these molecules reacted with sunlight and other gases in the atmosphere, the smoke was fundamentally transformed. This is what we mean when scientists talk about smoke “aging” or getting “stale” over time. Other recent research has started to show how wildfire smoke can become more toxic as it ages.

What Do All These Changes Mean for Health?

The health damage from smoke is largely a result of how much PM2.5 it contains. These are tiny particles, a fraction of the width of a human hair, that can be breathed deep into the lungs where they can irritate the respiratory tract. Even short-term exposure can aggravate heart and lung problems. 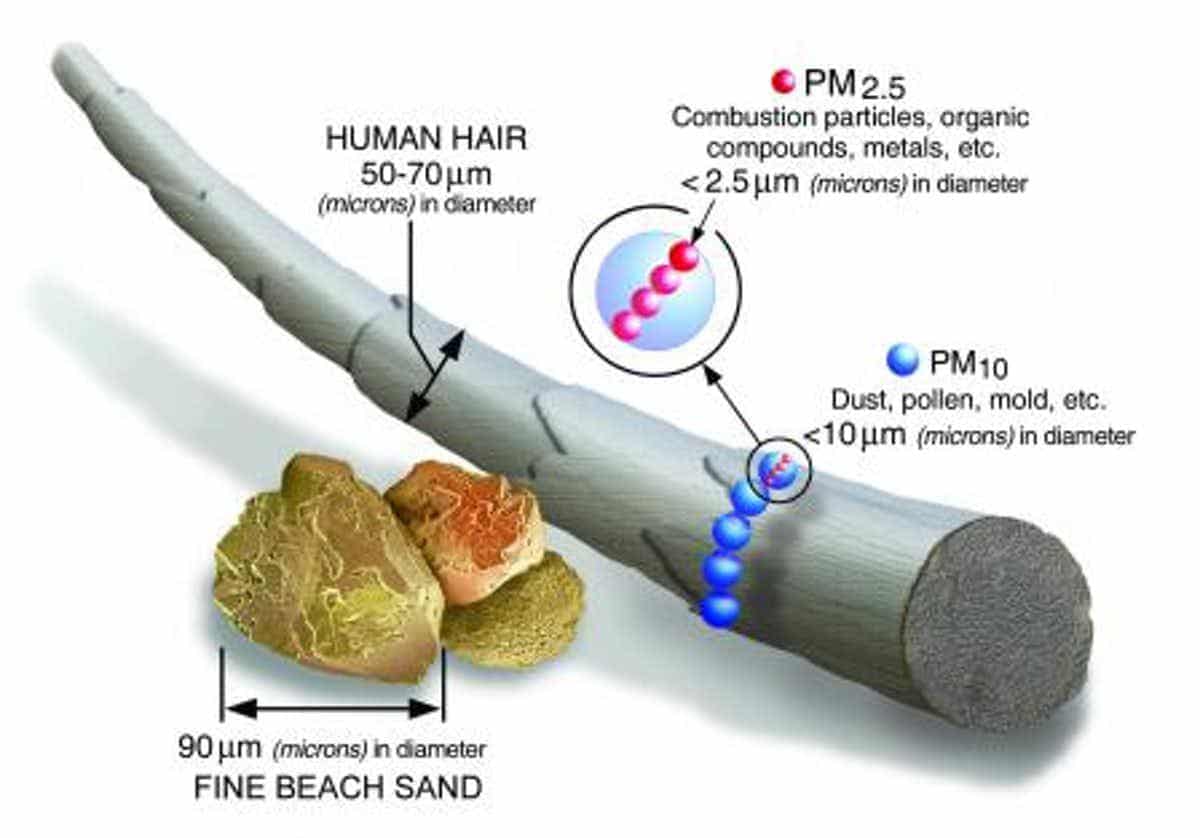 PM2.5 particles are tiny at less than 2.5 microns across. U.S. Environmental Protection Agency

Chemical reactions control how much PM2.5 is in wildfire smoke as it is transported away from the fires and into population centers. Using our aircraft measurements to understand these processes, we chemists can better predict how much PM2.5 will be present in aged smoke.

Combined with meteorology forecasting that predicts where the smoke will go, this could lead to improved air quality models that can tell people downwind whether they will be exposed to unhealthy air.

With wildfires increasingly in the news, more people have become aware of their own air quality. Resources such as AirNow from the U.S. Environmental Protection Agency provide current and forecasted air quality data, along with explanations of the health hazards. Local information is often available from state or regional agencies as well.

Air quality measurements and forecasts can help people avoid unhealthy situations, especially sensitive groups such as people with asthma. During predicted periods of unhealthy air quality, local or state governments can use forecasts to reduce other pollution sources, such as discouraging residential wood burning or high-emitting industrial activities.

Looking to the future, wildfire smoke is likely to be widespread across the West each year for several reasons. Rising temperatures are leaving the landscape drier and more flammable. At the same time, more people are building homes in the wildland-urban interface, creating more opportunities for fires to start.

A large community of scientists including me are working to better understand wildfire emissions and how they change as they blow into downwind communities. That knowledge will improve forecasts for air quality and health impacts of wildfire smoke, so people can learn to adapt and avoid the worst health consequences.

Brett B. Palm is a Postdoctoral Researcher in Atmospheric Chemistry, University of Washington.