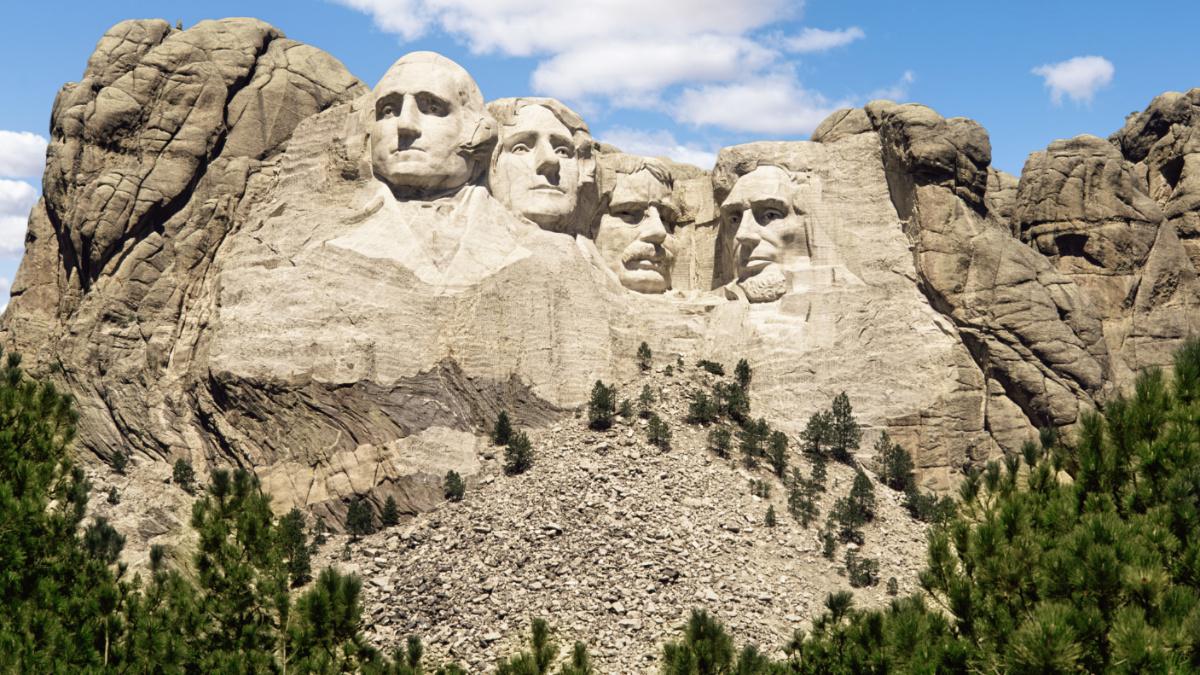 Mount Rushmore National Memorial has been forced to close because of the Keystone Fire and 244 Fire. Jacobs Stock Photography Ltd / Getty Images

The largest blaze is the Schroeder Fire, first reported at 9:22 a.m. Monday one mile west of Rapid City, according to a Facebook update. It has since spread to 1,900 acres and forced up to 500 people to flee their homes, the Rapid City Journal reported Monday evening. Authorities attributed the fire to human causes, but its spread to environmental factors.

“We are at record-dry conditions along with high winds playing a major factor in this fight,” South Dakota Wildland Fire Division Director Jay Esperance said in the Facebook update.

As of the most recent update, there were 250 firefighters battling the flames. The fire has destroyed at least one home and two pole barns, the Pennington County Sheriff’s Office confirmed on Facebook. No injuries have been reported, The Associated Press said.

Meanwhile, Mount Rushmore National Memorial was forced to close because of two other fires, the Keystone Fire and 244 Fire, CNN reported. The 244 fire is located 1.5 miles southwest of Keystone. It spread to around 75 acres as of Monday afternoon, according to the interagency website Great Plains Fire Information. The Keystone Fire has successfully been reduced from 30 to 15 acres as of 7 p.m. Monday, the website said.

“I do want to remind everybody that this is an incredibly fluid situation,” CNN quoted Noem at a press conference. “That these winds are a major factor and that as they shift and change and we get those gusts, that’s when the can jump and we’re going to have to stay pretty mobile.”

Parts of South Dakota are under a red flag warning for ideal fire conditions until 8 p.m. Tuesday, The New York Times reported. However, wind speeds are predicted to decrease on Tuesday and Wednesday, the Rapid City Journal reported.

“Humidity is going to be low so… we’re going to stay dry, but the winds will be diminishing gradually so that’s definitely good news,” Matthew Bunkers, a National Weather Service Rapid City meteorologist, told the Rapid City Journal.

Wildfires are expected to become more frequent in South Dakota’s Black Hills due to the climate crisis as temperatures rise and humidity declines, according to a study published in Ecology Evolution. South Dakota State Fire Meteorologist Darren Clabo told KOTA TV that this would have a profound impact on the state’s landscape.

“I think the long-term effects of all these fires are there’s going to be some places that have fundamental ecological shifts,” Clabo said. “Which basically means that the ecosystems that are there currently aren’t going to exist in those areas anymore, our climates shifted too far away from where those ecosystems can naturally exist and so I think we are going to start seeing some very large broad landscape-level changes out there.”