1.8 Billion Tons More Greenhouse Gases Will Be Released, Thanks to Trump 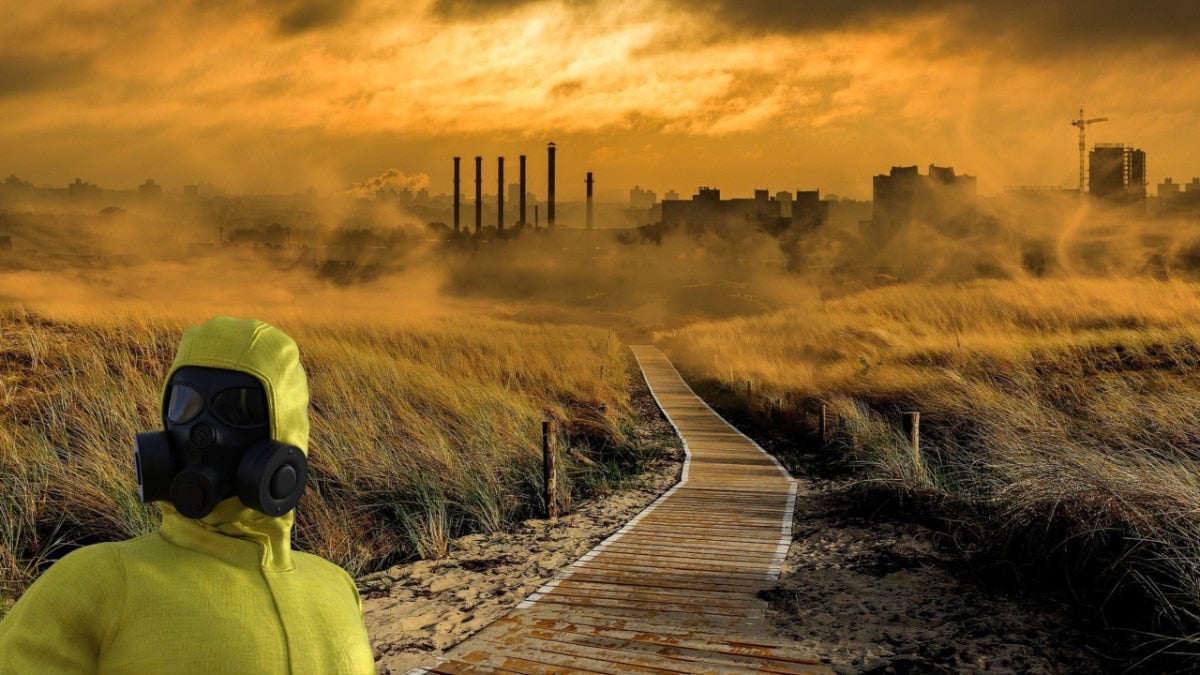 A September 17 report by the Rhodium Group calculates that 1.8 billion tons more greenhouse gases will be released over the next 15 years as a result of climate change rollbacks the Trump administration has achieved so far. Pete Linforth / Pixabay / CC0

When President Donald Trump visited California on September 14 and dismissed the state Secretary of Natural Resources Wade Crowfoot’s plea to recognize the role of climate change in the midst of the Golden State’s worst and most dangerous recorded fire season to date, he gaslighted the tens of millions of West Coast residents suffering through the ordeal.

While Trump declared that the weather will just “start getting cooler” and that science is irrelevant to the wildfires, millions were struggling to breathe through the toxic smoke that gave Portland the week-long distinction of having the most hazardous air on the planet, with pollution levels in Seattle and San Francisco close behind. Whole towns in California and Oregon have been destroyed by the wildfires.

A growing body of scientific evidence over the last several decades confirms that as atmospheric levels of carbon dioxide and other greenhouse gases rise, so too will frequent, intense and increasingly deadly weather events. Strange new weather phenomena like fire tornadoes, “snowacanes” and “rain bombs” are now part of our experience and language. Droughts, unprecedented heat, wildfires, hurricanes, tornadoes and flooding are happening more often, becoming more severe, and occurring over larger and larger areas.

By the morning of Trump’s California appearance, 28 major fires had incinerated more than 3 million acres just in California. Fires in California, Oregon and Washington had combined to create a hellscape of toxic smoke that turned the skies in those states orange, blood red and deep magenta and was detected as far away as Europe. At least 35 people had died.

Meanwhile, on the other side of the country, Hurricane Sally, one of five named storms then swirling in the Atlantic, was just two days away from flooding coastal communities from the Florida Panhandle to Louisiana. Sally, which submerged downtown Pensacola in five feet of water, hit just three weeks after Hurricane Laura caused massive flooding and 10 deaths. Slamming into the Louisiana coast with 150-mile-an-hour winds, Laura was one of the strongest hurricanes to make landfall in U.S. history.

So far, 2020 has been an extremely busy hurricane season with more than 20 named storms, seven of which formed in the first half of September. With two more months before the hurricane season officially ends, there could be several more. Meanwhile, many of the fires across the West are still burning.

Nor has catastrophic weather spared the middle of the country this summer. On August 10, a particularly strong derecho, a quick-forming massive wall of intense winds, blasted through Iowa, Wisconsin, Illinois and Indiana. The derecho cut a path 770 miles long, held its strength for 14 hours, and clocked winds up to 140 miles per hour. Four people died, and crops and buildings on some 10 million acres in Iowa — nearly a third of the state’s farmland — were heavily damaged. This storm also caused significant damage to cars and homes, downed power lines and destroyed massive numbers of trees in Cedar Rapids, Des Moines and parts of Chicago.

In 2019, the Fourth National Climate Assessment, a comprehensive report mandated by Congress to study the impacts of climate change, found that without substantial and sustained greenhouse gas reductions along with vast infrastructure upgrades, unabated climate change will threaten much that many Americans take for granted and lead to an unrecognizable, dystopian existence for large swaths of the population.

Among the report’s findings: food will become harder to grow and be lower in quality but more expensive. Clean, safe water supplies will become scarce in many parts of the country. Human health will take a significant hit from worsening air and water pollution, greater exposure to disease-carrying insects, pests, foodborne and waterborne pathogens, as well as the emotional strain of having to deal with the reality and uncertainty of catastrophic weather events and their aftermath. Heat will kill more people. Energy supplies will become increasingly unstable and more costly (because most U.S. power plants need a steady supply of cooling water to operate).

Moreover, the report predicts that already compromised roads, bridges, and the safety of pipelines all over the country will be vulnerable to damage from violent storms and flooding. Whole communities, especially those facing rising sea levels along the coastline, will be forced to move. Increasing production and supply chain disruptions will cause significant damage to the economy as a whole. Areas and industries that depend on natural resources and good, stable weather will likely be hardest hit with annual losses in the hundreds of billions of dollars by the end of the century, an amount exceeding the current total economic output of many U.S. states.

Overall, the report predicts “substantial net damage to the U.S. economy throughout this century,” though it notes that poor and disadvantaged communities will disproportionately bear the worst impacts.

A stark illustration of what current levels of greenhouse gas emissions will look like is provided in maps by the Rhodium Group, a New York-based independent research organization, which forecasts a much harsher living environment for many parts of the U.S. over the next 20 to 40 years. Temperatures above 95 degrees Fahrenheit will become much more common, especially in the South and Southwest, with places like Phoenix, Arizona, much of interior Southern California and southern Texas likely sweltering in 95 degrees or hotter for half the year.

Along with rising temperatures, humidity is expected to dramatically increase, even in places like Arizona, Southern California and Nevada, which have long been known for their dry heat. When excessive humidity combines with extreme heat, it creates “wet bulb” temperatures where sweating fails to cool the body. Such conditions make it dangerous to work outside or for kids to play outside. According to Rhodium’s projections, current emissions are on track to turn much of the Mississippi Valley, the above-mentioned areas in the Southwest, southern Texas, and coastal areas in Florida, Georgia, North Carolina and South Carolina into high wet bulb zones.

Despite all of these future threats — on top of the climate disasters we are already seeing — Trump, the ruling Republicans, the fossil fuel sector and their defenders in right-wing media continue to deny climate change.

“If we don’t have a stable environment to live in, there’s no way to have life, liberty, or pursue happiness,” Jeffrey Potent, adjunct professor of sustainability at Columbia University’s School of International and Public Affairs, told Truthout, decrying the Trump administration’s attack on the government’s ability to oversee and protect our environment.

“This is completely different from anything I have encountered in Washington,” said Tyson Slocum, director Public Citizen’s energy program. “It’s an all-out assault on everything for the public interest.”

Before he assumed power, Trump attacked regulations as unnecessary barriers to freedom and economic prosperity. Since taking office, he has targeted anything enacted by the administration of his predecessor, Barack Obama, and taken steps to withdraw the U.S. from the Paris agreement, the international effort to combat climate change. He has also staffed heads of key agencies with climate deniers of various stripes, forced out career public servants and created a hostile work environment for those who don’t profess loyalty to his deregulatory agenda.

Like Trump himself, some of his cabinet choices displayed an audacious penchant for self-dealing and abusing their positions of authority. One example is Trump’s first Environmental Protection Agency (EPA) Administrator, Scott Pruitt, who aggressively worked to overturn Obama’s climate regulations, spent most of his time in private meetings with fossil fuel and chemical company executives, sidelined career EPA staff and reconfigured independent scientific advisory boards to make them more supportive of the industries EPA is charged with regulating. Dubbed “one of the most scandal-plagued Cabinet officials in U.S. history,” Pruitt resigned in disgrace after revelations about his multiple brazen abuses, including using the agency as his personal concierge service and piggy bank.

At the Department of Interior (DOI), a sprawling agency that oversees 75 percent of the country’s public federal lands and includes the U.S. Geological Survey, which is tasked with evaluating natural hazards that threaten life and the health of our ecosystems, Trump installed another flamboyant anti-environmentalist to head the agency. Like Pruitt, Trump’s first Interior Secretary Ryan Zinke aggressively attacked environmental regulations, ditched more than 200 advisory panels, and pushed to open up vast swaths of public land to oil and gas drilling. Described by one environmental group as “the most anti-conservation Interior secretary in our nation’s history,” Zinke was forced out after numerous highly publicized conflict-of-interest scandals.

The Trump administration has done much more than stack government agencies with fossil fuel industry proponents. It has removed or diluted discussion of climate change from as many government platforms as it can and decimated independent scientific advisory boards that provide unbiased, fact-based information the government needs to enact policies that protect the public. It has also slashed environmental agency staffing and budgets.

The Damage So Far

A September 17 report by the Rhodium Group calculates that 1.8 billion tons more greenhouse gases will be released over the next 15 years as a result of climate change rollbacks the Trump administration has achieved so far. These include repealing Obama’s main climate policy, the Clean Power Plan, which was intended to reduce dirty emissions from power plants; increasing pollution from cars by rolling back fuel economy standards and challenging California’s longtime authority to set stricter emissions standards; targeting controls on hydrofluorocarbons, powerful greenhouse gases used mainly in refrigerators and air conditioners that also destroy the Earth’s protective ozone layer; and allowing unreported and unregulated emissions of methane, another potent greenhouse gas, by oil and gas companies.

Besides these measures, Trump is also trying to gut core environmental statutes like the Clean Air Act, the Clean Water Act, the National Environmental Policy Act and the Endangered Species Act, all of which were enacted to protect human health and preserve a livable world.

The Paris agreement aims to keep the rise in average global temperatures at less than 2 degrees Celsius above pre-industrial levels and hopefully cap it at 1.5 degrees C or lower. We are now at approximately 1.2 degrees C and counting.

This story originally appeared in Truthout and is republished here as part of Covering Climate Now, a global journalism collaboration strengthening coverage of the climate story.