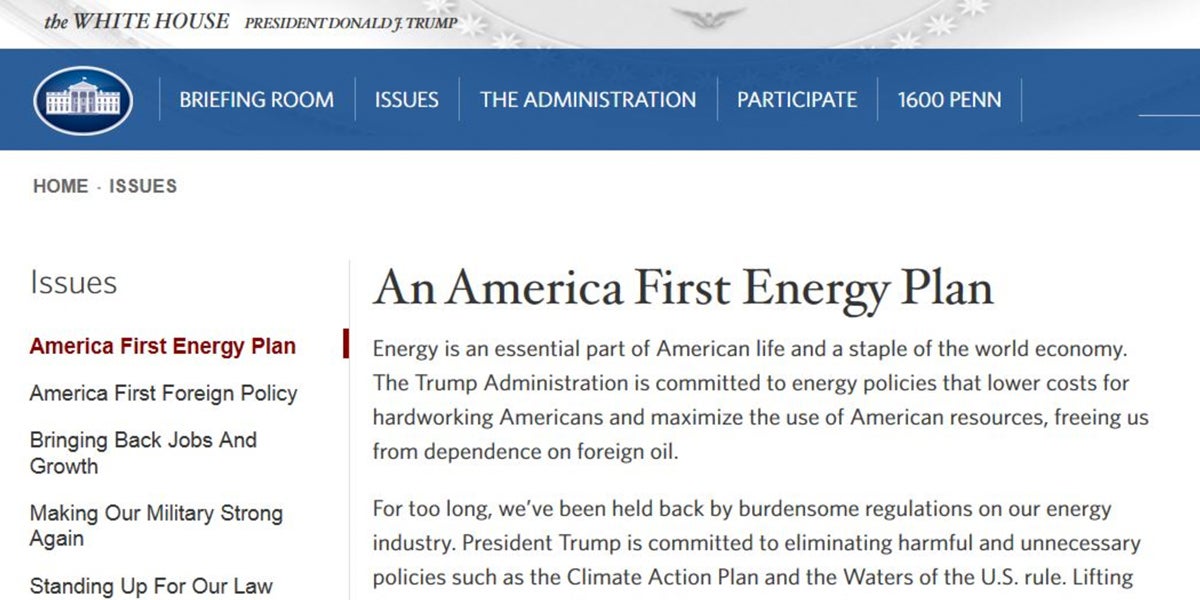 As the Trump Administration Sunday descended into a farce of “alternative facts” to try and argue that there had been historic numbers at the new President’s inauguration, it is quite clear “alternative” and blatantly bogus facts, will be used on energy and climate too.

Within minutes of the president being inaugurated on Friday, the White House’s webpage got a make-over, reflecting Trump’s post-truth, pro-oil agenda.

The White House removed pretty much all references to climate change.

Out went Obama’s message on climate change, where you could see the ex-president saying “our children, and our children’s children, will look at us in the eye and they’ll ask us, did we do all that we could when we had the chance to deal with this problem and leave them a cleaner, safe [sic], more stable world?”

That box has now been deleted and replaced by Trump’s “America First Energy Plan” which is an oilman’s Drill-baby-drill dream come true.

“Sound energy policy begins with the recognition that we have vast untapped domestic energy reserves right here in America. The Trump Administration will embrace the shale oil and gas revolution to bring jobs and prosperity to millions of Americans. We must take advantage of the estimated $50 trillion in untapped shale, oil and natural gas reserves, especially those on federal lands that the American people own.” 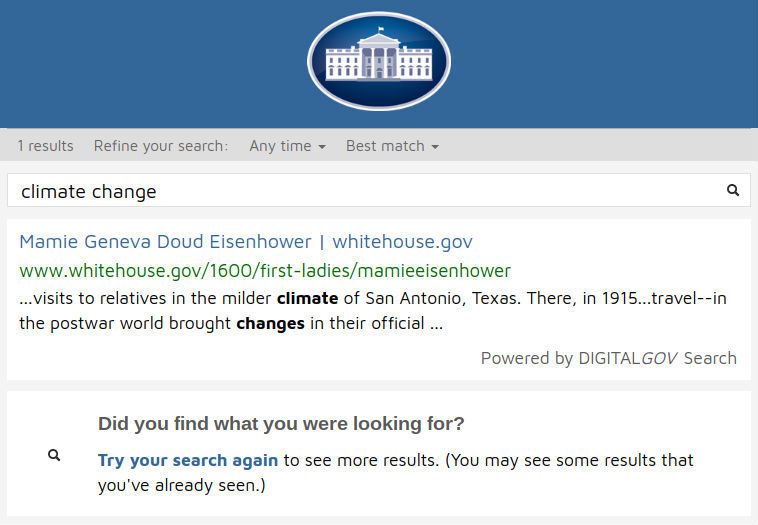 This pro-oil agenda is reflected in Trump’s proposed cabinet. Even the ever-impartial Financial Times noted that: “As Donald Trump moves into the White House, it would be hard to dream up a cabinet friendlier to fossil fuels.”

Such is the optimism about Trump from fossil fuel investors that since his election, investors have pumped nearly $4 billion into the U.S. energy sector.

Trump’s energy plan concludes with the concept of “a brighter future depends on policies that stimulate our economy, ensure our security and protect our health.”

As Newsweek points out:

“The missing piece is a plan to address climate change. The future will not be brighter if the coasts are inundated by rising sea levels. Florida could be hit hard, as could Trump’s Mar-a-Lago estate in Palm Beach. Separated from the mainland by the Intracoastal Waterway, Palm Beach is only seven feet above sea level. If Trump wants a brighter future, perhaps he should move to higher ground.”

Likewise, Trump may want to drill every last drop of oil and gas from under U.S. lands, but this may not be as easy as he thinks.

For a Billionaire businessman it seems Trump does not understand simple supply and demand economics.

Once again the Financial Times is skeptical: “The idea that expanding where companies can drill, easing the process of getting a permit and scrapping efforts to curb carbon emissions ‘will unleash an energy revolution,’ as the Trump transition website put it, is untested. If more supplies do flow, they could depress energy prices and punish investors.”

The more shale that is produced, the more it will undermine coal. If Trump subsidies coal, it will undermine shale. The majority of shale is on private land and not on federal land. That is subject to jurisdiction from the states, rather than the Federal Government.

Trump may want to try and undo Obama’s legacy on climate, but the Financial Times argues this could take “years to undo.” Trump’s rhetoric maybe simple, but life is more complicated in the real world.

The person they would lobby is the U.S. Secretary of State. Later today, Rex Tillerson, the ex-Exxon boss could be approved for that post.

Yes, we face the most pro-fossil fuel cabinet in generations. But every day the resistance to this extreme Trump agenda grows stronger. Just witness the amazing scenes from the women’s marches last Saturday from around the world. Look at those pictures and draw hope.