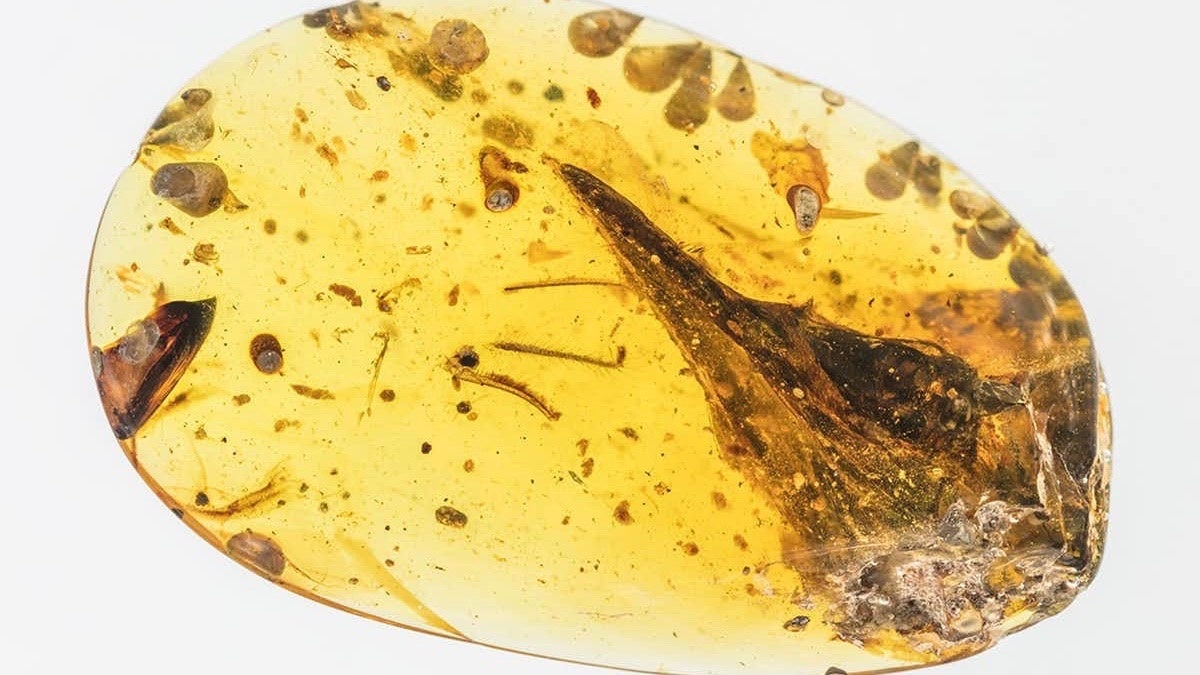 Editor’s Note from The Conversation, July 28, 2020: This article was based on a study published in the peer-reviewed journal Nature on March 11, 2020. On July 22, 2020, the journal retracted the article after other researchers raised concerns that the skull belonged to a lizard, not a bird. Here is the retraction note from the paper’s authors: “We, the authors, are retracting this Article to prevent inaccurate information from remaining in the literature. Although the description of Oculudentavis khaungraae remains accurate, a new unpublished specimen casts doubts upon our hypothesis regarding the phylogenetic position of HPG-15-3.”

In 2016, our colleague Xing Lida held up a small piece of polished, deeply yellow amber. As sunlight shone through the ancient resin, Lida saw the outline of a pristinely preserved, amazingly small skull. There was a prominent eye socket, a dome-shaped crown of the head, a long, tapering snout and even small teeth. It was bird-like, but in a strange and ancient way.

The amber contains the skull of Oculudentavis khaungraae, a newly described dinosaur and one of the smallest ever discovered. Its tiny stature is forcing paleontologists to rethink the lower limits of body size in birds, and the nearly 100-million-year-old fossil is challenging the current understanding of when and how dinosaur giants shrank into the birds of today. 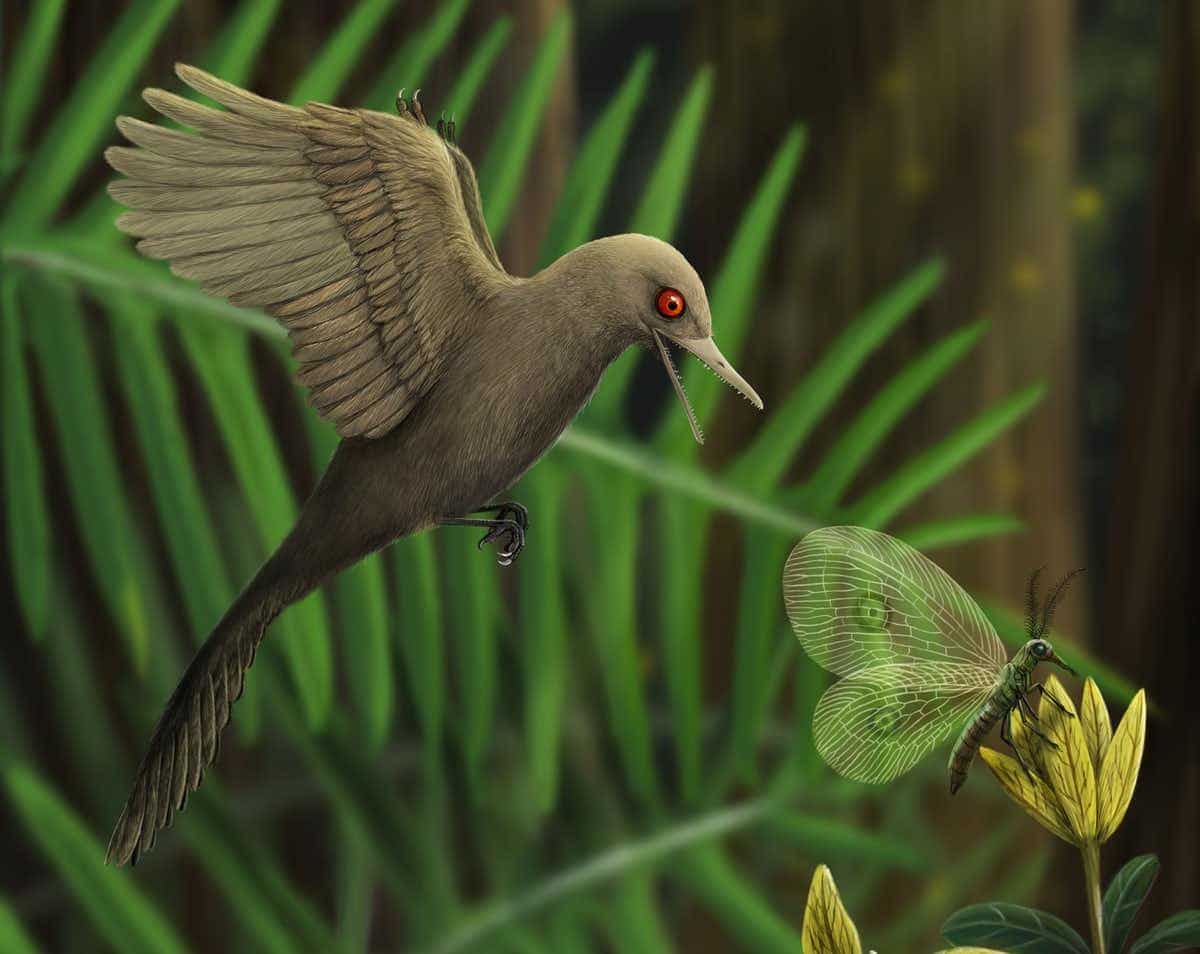 The evolutionary transition of dinosaurs to modern birds is one of the most astounding transformations in the history of life: large, bipedal and mostly carnivorous dinosaurs morphed into small, flying birds. Famous discoveries like Archaeopteryx and more recently the fossils from the Jehol Biota in China have given researchers some hints about the process. But finds from this evolutionary phase — which researchers think began about 200 million years ago — are rare.

Paleontologists are far from having a complete picture of the evolution of birds, and even farther from a full inventory of Earth’s ecosystems in the age of dinosaurs. Our research on the tiny Oculudentavis, published in the journal Nature, adds valuable information to the puzzle of when, how and to what extent dinosaurs shrank. 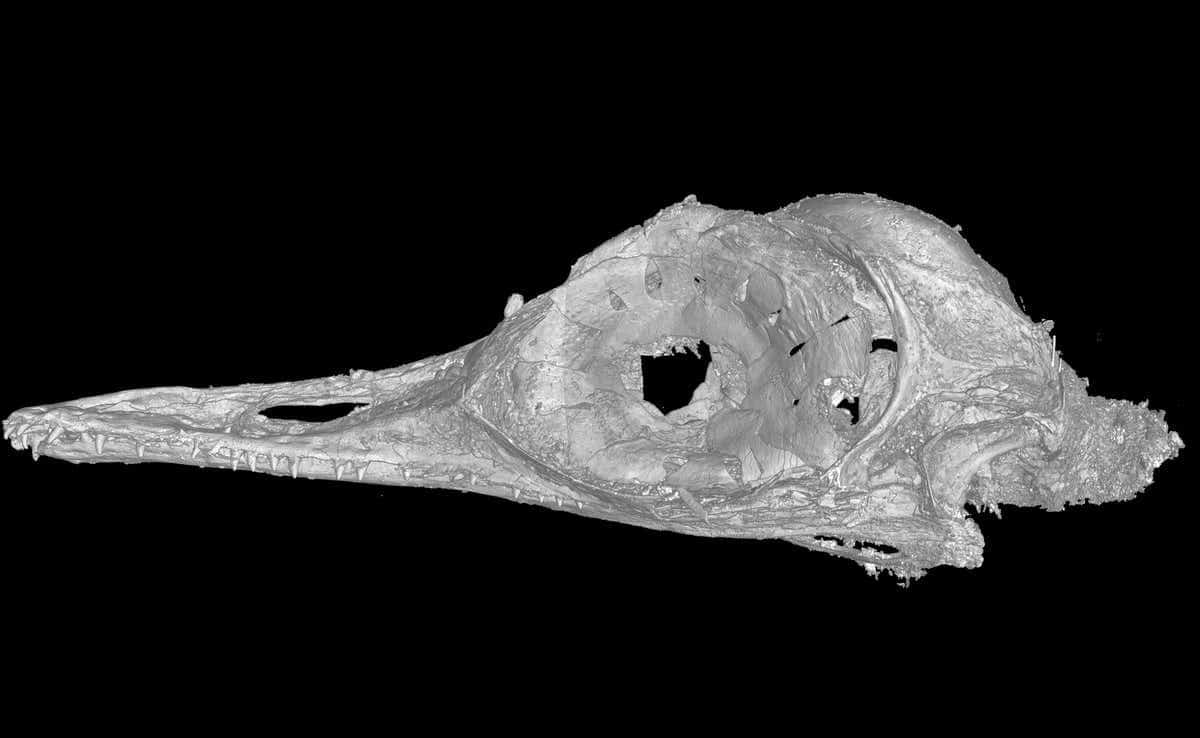 This high-resolution scan allowed us to see the intricacies of a bone structure unlike any before seen in birds or dinosaurs. Xing Lida / CC BY-ND

Our team needed to see the minute details of the skull, and we needed to do it without cracking or ruining the specimen – a difficult task with a skull encased in 99-million-year old amber from Myanmar. To do that, we scanned the skull with high-resolution X-rays and created a digital model with very fine anatomical detail. What emerged was a picture of an overall bird-like anatomy. But in some interesting ways, Oculudentavis is unlike any bird or dinosaur that has ever been found.

The obvious curiosity of the fossil is its size: Oculudentavis rivaled the smallest bird living today, the bee hummingbird, and likely was no more than 1.6 inches (4 centimeters) from beak to tail. We considered whether the skull possibly belonged to a very young animal, but the extent and pattern of bone growth and the proportional size of the eye pointed to a mature bird.

With a total skull length of just about 0.6 inches (1.5 centimeters), Oculudentavis pushes against what is considered the lower limit of size in birds: the head still had to hold functional eyes, a brain and jaws. The small size is especially surprising if one considers that Oculudentavis lived during the same time as giant plant-eating dinosaurs like Argentinosaurus.

The small size of Oculudentavis is striking, but to a trained eye there are other extremely unusual features, too.

First of all, the skull seems to be built for strength. The bones show an unusual pattern of fusion and the skull lacks an antorbital fenestra, a small hole often found in front of the eye.

The eyes of Oculudentavis also surprised us. The shape of the bones found within the eye, the scleral ossicles, suggests that it probably had conical eyes with small pupils. This type of eye structure is especially well adapted for moving around in bright light. While daytime activity might be expected for an ancient bird from the age of dinosaurs, the shape of the ossicles is entirely distinct from any other dinosaur and resembles those of modern-day lizards.

Adding to the list of unexpected features, the upper jaw carries at least 23 small teeth. These teeth extend all the way back beneath the eye and are not set in deep pockets, an unusual arrangement for most ancient birds. The large number of teeth and their sharp cutting edges suggest that Oculudentavis was a predator that may have fed on small bugs.

The sum of these traits — a strong skull, good eyesight and a hunter’s set of teeth — suggests to us that Oculudentavis led a life previously unknown among ancient birds: it was a hummingbird-sized daytime predator.

One of the Earliest and Tiniest Birds?

Placing Oculudentavis in the tree of life is, given its strange anatomy, challenging. Our phylogenetic analysis — the investigation of its relationships to other dinosaurs — identifies Oculudentavis as one of the most ancient birds. Only Archaeopteryx branched off earlier.

Scientists consider the nectar-feeding hummingbirds — which appeared 30 million years ago — the smallest dinosaurs on record. But if our placement of Oculudentavis holds true, the miniaturization of dinosaurs may have peaked far earlier than paleontologists previously thought. In fact, the largest and the smallest dinosaurs may have walked and flown the same earth nearly 100 million years ago.

Our work demonstrates how little scientists know about the little things in the history of life. Scientists’ snapshot of fossil ecosystems in the dinosaur age is incomplete and leaves so many questions unanswered. But paleontologists are eager to take on these questions. What other tiny species were out there? What was their ecological function? Was Oculudentavis the only visually guided bug hunter? To better understand the evolution of the diversity of life we need more emphasis and recognition of the small.

Amber holds strong potential to fill that gap. Maybe one day a scientist will hold up another piece, and let sunshine reveal a complete Oculudentavis, or even a previously unknown species. More finds in amber will help illuminate the world of the tiny vertebrates in the age of dinosaurs.