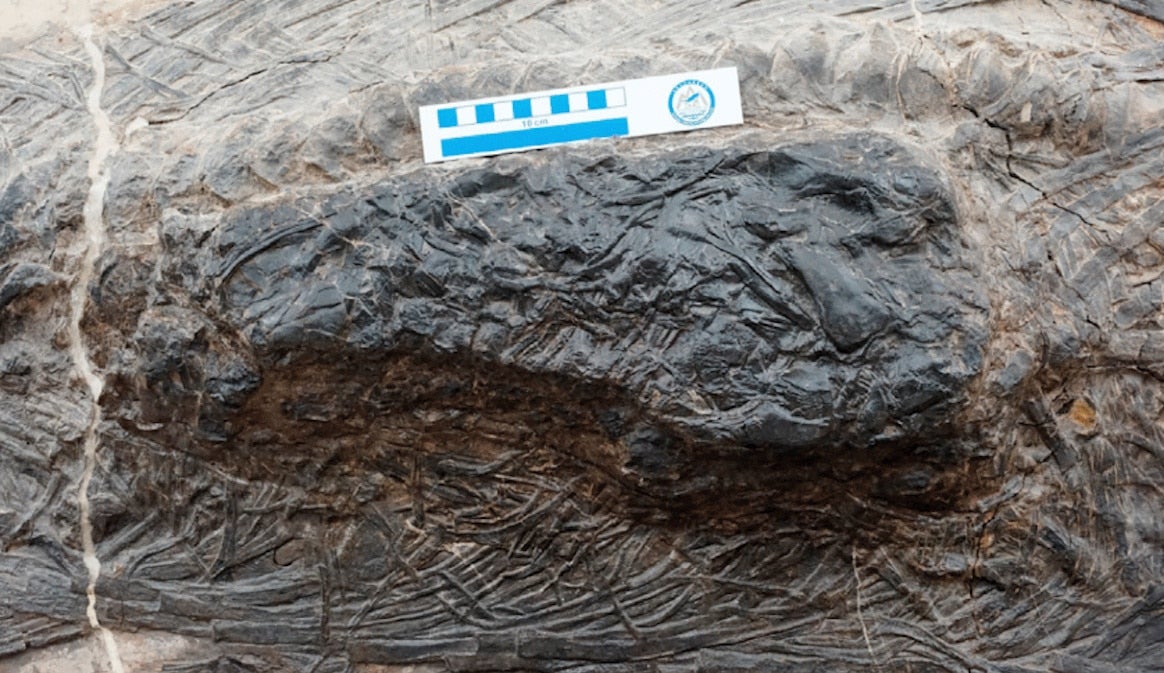 The fossilized remains of one marine reptile inside the stomach of another. Da-Yong Jiang, et al. / UC Davis

An unusual meal some 240 million years ago was preserved in stone, and now it’s changing the way scientists think about the eating habits of marine reptiles in the prehistoric ocean.

In a paper published in iScience Thursday, scientists announced the discovery of a fossil of a five meter (approximately 15 foot) ichthyosaur with the remains of a four meter (approximately 12 foot) thalattosaur in its stomach. The fossil is probably the earliest evidence of megafaunal predation — when an animal preys on another animal human-sized or larger — in marine reptiles.

“We have never found articulated remains of a large reptile in the stomach of gigantic predators from the age of dinosaurs, such as marine reptiles and dinosaurs,” study coauthor and University of California, Davis professor of earth and planetary sciences Ryosuke Motani said in a university press release. “We always guessed from tooth shape and jaw design that these predators must have fed on large prey but now we have direct evidence that they did.”

Ichthyosaurs were a type of marine reptile that first evolved some 250 million years ago after the Permian mass extinction. Their bodies resemble modern tuna, but they breathed air like dolphins or whales.

This particular ichthyosaur was a type called Guizhouichthyosaurus. Its remains, first discovered in China’s Guizhou province in 2010, were unique because of a large bulge of other bones discovered in the creature’s stomach. Upon investigation, the researchers discerned that the bones belonged to a species of the lizard-like reptile thalattosaur called Xinpusaurus xingyiensis.

The find was remarkable in part because early ichthyosaurs don’t have the kind of sharp, serrated teeth usually associated with apex predators, National Geographic explained. Instead, their blunt, cone-shaped teeth suggested a preference for softer, squid-like creatures.

But the fossil evidence indicates that the ichthyosaur used its blunt teeth to grip the slightly smaller reptile, the way predators like orcas and crocodiles do today, according to the press release. Because other marine reptiles from the same time period have similar teeth, the researchers think megafaunal predation was more widespread than previously believed.

“Sometimes the details of a prehistoric crime scene tell us a weapon was a lot more capable of damage than we thought,” University of Edinburgh paleontologist Stephen Brusatte, who was not involved with the study, told National Geographic.

In this case, the murdered thalattosaur may have had its revenge. Its remains were not digested, indicating that the ichthyosaur died soon after swallowing it. And the ichthyosaur fossil showed evidence of a broken neck.

“The prey is lighter than the predator but its resistance must have been fierce,” Motani told Reuters. “The predator probably damaged its neck to some extent while subduing the prey. Then it took the head and tail of the prey off through jerking and twisting, and swallowed the trunk using inertia and gravity. These activities may have expanded the damage of the neck to the point it was fatal.”

But while the meal may have been fatal for both animals involved, it offers hope for the resilience of life overall, University of Oslo paleontologist Aubrey Jane Roberts, who was not part of the study, told National Geographic.

Apex predators are usually the last animals to emerge when a food chain reassembles. The fact that they evolved so soon after the Permian mass extinction, in which 90 percent of marine species disappeared, is remarkable.

“That’s why this paper is so important,” Roberts said. “It tells a story about how marine seas recovered from basically complete destruction to having a fully formed ecosystem.”