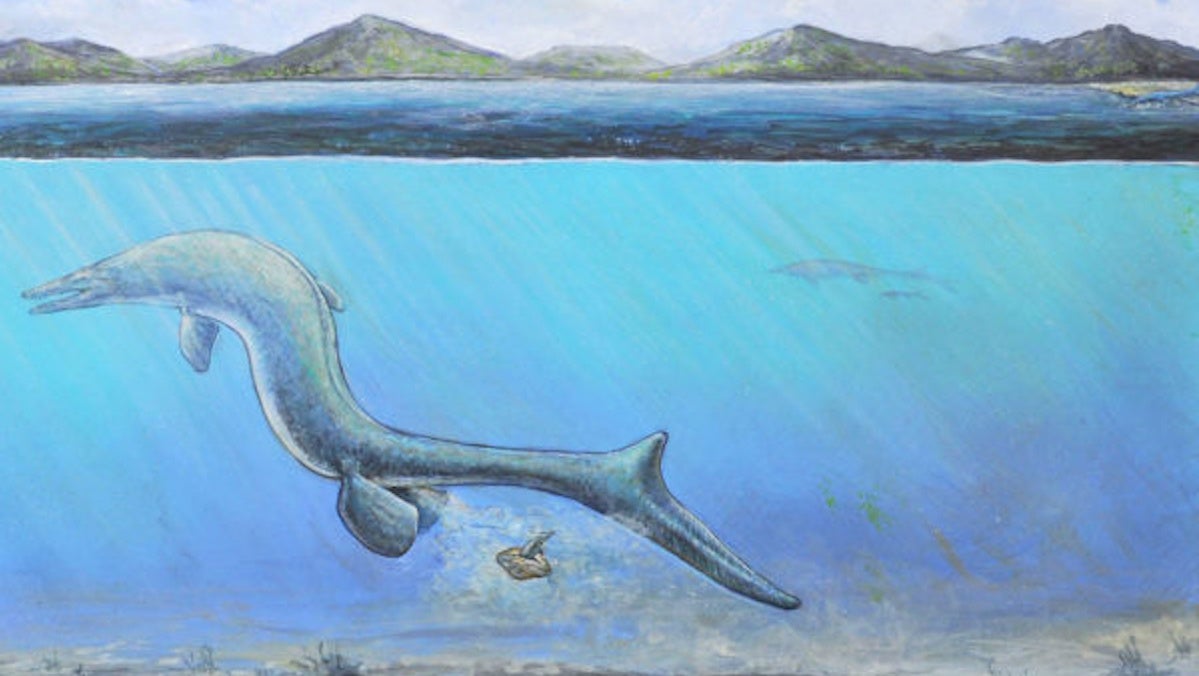 An artist's interpretation of a baby mosasaur emerging from an egg. John Maisano / Jackson School of Geosciences

The first fossil egg discovered in Antarctica is also the largest soft-shelled egg ever found and the second-largest egg of any kind, after the extinct elephant bird.

The more than 11-by-7-inch egg was first discovered in 2011, according to a University of Texas at Austin (UT Austin) press release, but researchers only recently figured out that it was a 66 million-year-old egg. Their findings, published in Nature Wednesday, are helping transform our understanding of ancient reptiles.

“A soft-shelled fossil egg like this is a rare gem,” Princeton University evolutionary biologist Mary Caswell Stoddard, who was involved with the research, told NPR. “The lack of soft-shelled fossil eggs, which are extraordinarily rare, makes it challenging to flesh out a detailed picture of egg evolution in vertebrates. This discovery helps provide one critical piece of the puzzle.”

Very excited to introduce Antarcticoolithus bradyi, the largest soft-shelled #fossil #egg found to date! Our study describes this giant egg from the Late Cretaceous of Antarctica, and investigates the potential identity of the egg layer.https://t.co/pXGaA1QTqn

The egg is so unique partly because of what the researchers think it hatched: a giant marine reptile like a mosasaur that was not thought to lay eggs at all.

“It shows their reproductive mode may have been very similar to that seen in some living lizards and snakes where there is a very thin eggshell present on an egg from which the baby emerges almost immediately,” study coauthor and professor at UT Austin’s Jackson School’s department of geological sciences Julia Clarke told CNN.

To make this determination, the researchers compared the egg-to-body size ratio of 259 modern reptiles. They then calculated that the animal that came out of the egg would have needed to be more than 20 feet long, excluding the tail.

The egg's structure is very similar to quick-hatching eggs laid by some snakes and lizards today! Imagine this, but giant: https://t.co/J8Z7LOR6b5

They also found fossil evidence of baby and adult mosasaurs and plesiosaurs in the same rock formation where the egg was discovered.

“Many authors have hypothesized that this was sort of a nursery site with shallow protected water, a cove environment where the young ones would have had a quiet setting to grow up,” lead author and UT Austin postdoctoral researcher Lucas Legendre said in the press release.

But these discoveries might not have been made at all if Clarke hadn’t visited Chile’s National Museum of Natural History in 2018.

The egg, which looked like a deflated football, had been brought to the museum by Chilean scientists who found it in Antarctica in 2011, according to the press release. Unsure of what it was, they dubbed it “The Thing.”

“It was weird enough that they decided to collect it, even though it wasn’t clear what it was. It definitely wasn’t bone, but it was strikingly unusual,” Clarke told NPR.

Coauthor David Rubilar-Rogers was one of the discovering scientists, according to the press release. He showed it to every geologist who visited the museum but received no answers, until Clarke arrived.

“I showed it to her and, after a few minutes, Julia told me it could be a deflated egg!” Rubilar-Rogers said.