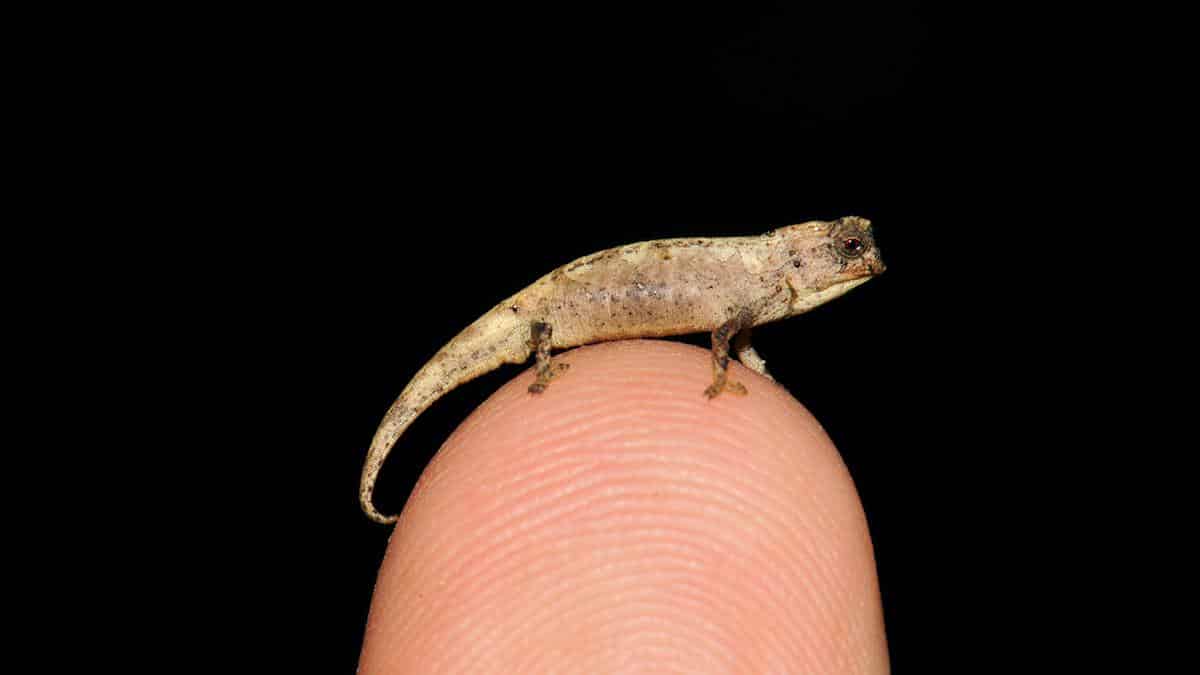 A newly discovered species of chameleon is the size of a sunflower seed. Frank Glaw / SNSB / ZSM

Scientists have discovered a new species of tiny chameleon, and it may be the smallest species of reptile on Earth.

The new chameleon, scientific name Brookesia nana, was found in the rainforest of Madagascar and written up in Scientific Reports in late January. The male of the species has a tip to tail length of only 21.6 millimeters, making him the smallest adult male bird, mammal or reptile ever recorded.

“I think what keeps stories like this front and center in our imagination is that every time something like this is discovered, it’s like, ‘Oh man, I guess [living creatures] can get a little smaller,'” evolutionary biologist Tony Gamble, who was not involved in the study, told National Geographic of the find.

Researchers first observed the chameleon in 2012 during an expedition to the Sorata massif — cool, wet, forested mountains in northern Madagascar. The creature is approximately the size of a sunflower seed.

“At the first glance, we realized that it was an important discovery,” study coauthor and Malagasy herpetologist Andolalao Rakotoarison told National Geographic.

The Malagasy and German research team think that both of the animals are adults, according to a press release from the German research institute SNSB, which led the study. The male had fully developed genitals, known as hemipenes. To determine the age of the female, a scan was required.

“With the aid of micro-CT scans – essentially three-dimensional x-rays – we were able to identify two eggs in the female specimen, and so demonstrate that it is an adult,” study co-author of the University of Potsdam Mark D. Scherz said in the press release.

However, what the researchers can’t know is how common the pair’s size is for their species, National Geographic pointed out. Its closest competitor for smallest reptile is Brookesia micra, another tiny chameleon that was also discovered in Madagascar.

“There are numerous extremely miniaturised vertebrates in Madagascar, including the smallest primates and some of the smallest frogs in the world, which have evolved independently,” Rakotoarison, currently at the University of Antananarivo in Madagascar, said in the press release.

However, researchers don’t know why this particular chameleon is so small. It was found on mainland Madagascar, which means the “island effect” that sees smaller animals evolve on smaller islands shouldn’t apply.

What they do know is that the creature may already be at risk from extinction. It lives in an area under extreme threat from deforestation, National Geographic explained. Poverty in the region where the chameleon was found means that most people can’t afford basic food staples. This has put pressure on the country to clear forest for agriculture; NASA figures show that 94 percent of Madagascar’s formerly forested areas have been impacted by deforestation. Hope lies in the fact that the Sorata massif has recently been included in a conservation zone. However, Scherz said the chameleon’s fate likely rested on the fate of Madagascar as a whole.

“It’s all good and well to say, ‘Oh, I really hope that people stop deforesting this forest,'” Scherz told National Geographic. “But until the economic future of Madagascar changes, there’s no hope for any of its wildlife because the people have to eat.”