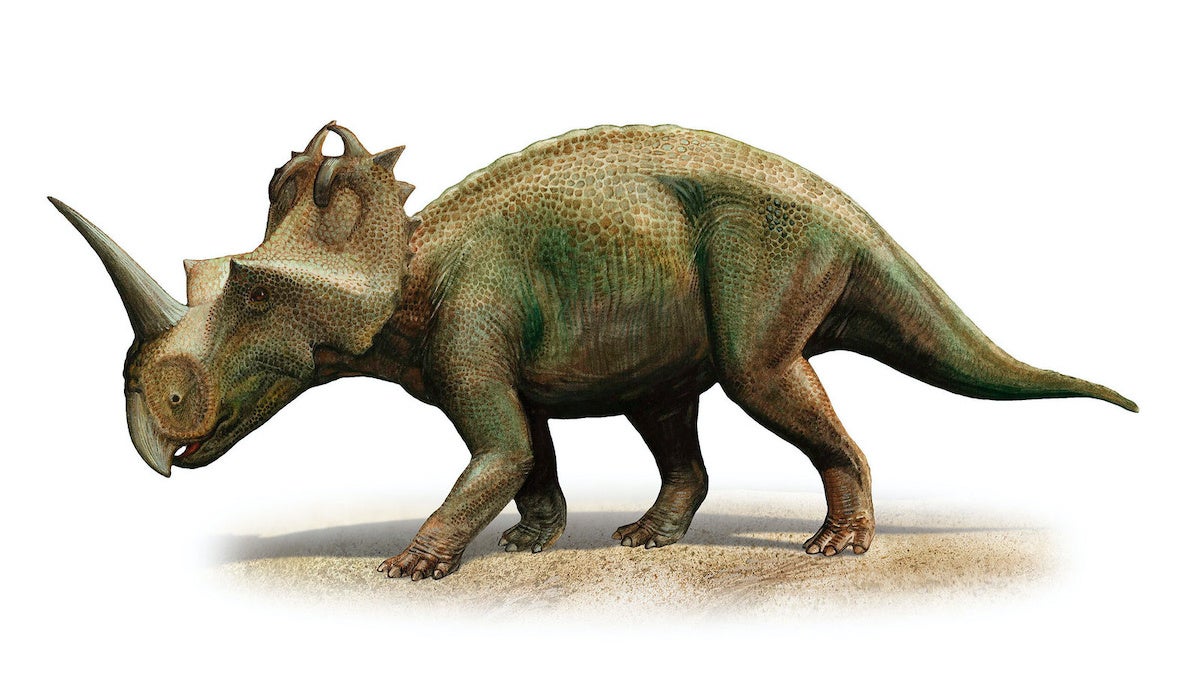 Scientists have discovered and diagnosed the first instance of malignant cancer in a dinosaur, and they did so by using modern medical techniques. They published their results earlier this week in The Lancet Oncology.

In 1989, a badly-deformed lower leg bone of a Centrosaurus apertus was found in Dinosaur Provincial Park in Alberta, Canada. One end of the fossilized fibula was enlarged and warped, leading scientists to originally presume a healed fracture.

Centrosaurus apertus was a plant-eating, single-horned dinosaur about 20 feet long. The particular animal that the fossil comes from lived 76 to 77 million years ago and likely died in a flood that killed its entire herd.

After the bone was excavated, it sat in a museum until 2017, when a team led by David Evans, a paleontologist at the Royal Ontario Museum, and Mark Crowther, a professor of pathology at McMaster University, looked at it with fresh eyes.

“We basically went on a hunt for dinosaur cancer,” Evans told NPR.

On a mission to find signs of cancer, the scientists searched through hundreds of injured or partially healed fossils before they found the malformed leg bone. The team invited multidisciplinary specialists and medical professionals from many fields, including pathology, radiology, orthopedic surgery and paleopathology, to help diagnose the suspected tumor, the news report said.

“The approach we took in this case was very similar to how we approach a patient that comes in with a new tumor, and we don’t know what kind of tumor it is,” said Seper Ekhtiari, an orthopedic surgery resident on the team, reported NPR.

The team performed high-resolution CT scans and examined thin sections of bone cells under a microscope, according to a Royal Ontario Museum (ROM) press release. This allowed them to visualize the progression of cancer through the bone, discounting the initial hypothesis of a fracture and leading to the diagnosis of osteosarcoma, Evans told Reuters.

Osteosarcoma generally occurs in rapidly growing bones, and is found in children and young adults, said Mark Crowther, the study’s co-author and a professor of medicine, pathology and molecular medicine, Reuters reported. The tumor destroys the bone and can spread to other tissues. Dinosaurs presumably would also be at risk because they grew at enormous rates, he added.

“One of the ways they got to such massive sizes is that they grew extremely rapidly from the time when they were born,” Ekhtiari told NPR. “So finding this in a dinosaur is not surprising.” He also noted that bone cancer “is probably more common than we think, or more common than we have found so far.”

The findings suggest that dinosaurs likely suffered from other diseases that affect bones, like tuberculosis and osteomyelitis, Crowther said, NPR reported.

To confirm the diagnosis, the scientists compared the fossil to a healthy centrosaurus fibula as well as to a human fibula confirmed with osteosarcoma, the ROM release explained.

“It is both fascinating and inspiring to see a similar multidisciplinary effort that we use in diagnosing and treating osteosarcoma in our patients leading to the first diagnosis of osteosarcoma in a dinosaur,” Ekhtiari said in the ROM release. “This discovery reminds us of the common biological links throughout the animal kingdom and reinforces the theory that osteosarcoma tends to affect bones when and where they are growing most rapidly.”

Evans, an expert on centrosaurus, told NPR, “We often think of dinosaurs as sort of mythical, powerful creatures, and I think this discovery really underscores that they can be afflicted by diseases that we see around us today, even horrible fatal cancers. I think in an odd way it brings them even more back to life.”