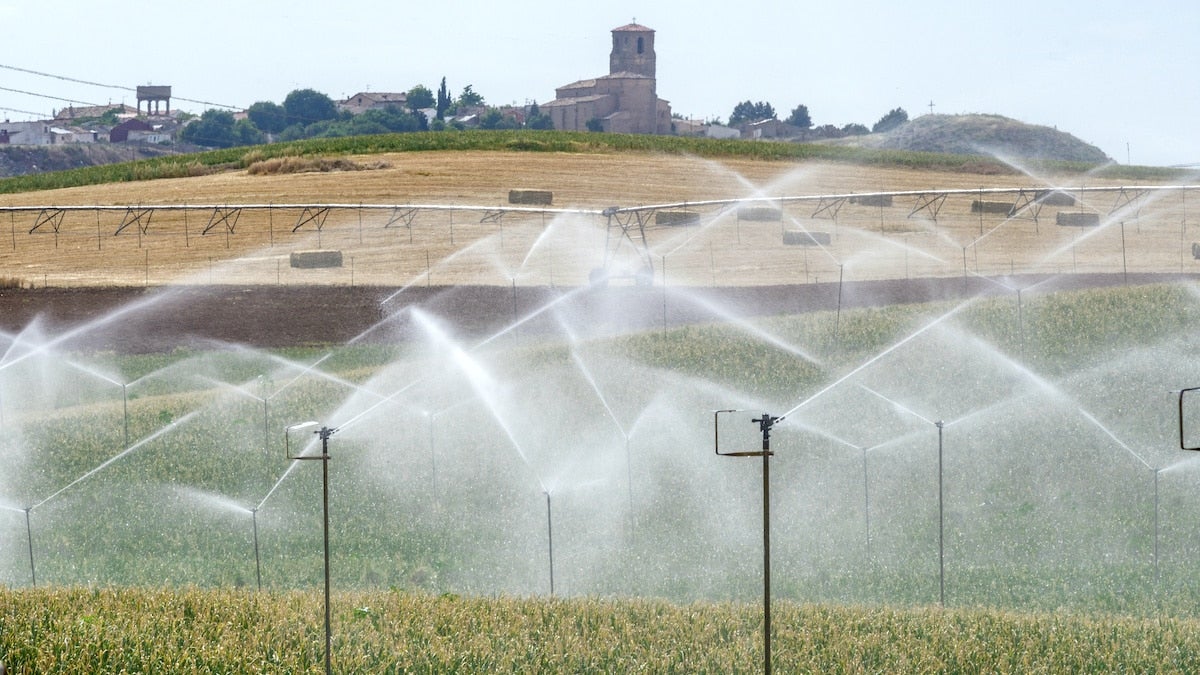 Sprinklers irrigate a field of onions near a Castilian village in Spain. According to a new study, the average farm size in the EU has almost doubled since the 1960s. miguelangelortega / Moment / Getty Images

A new report released Tuesday details the “shocking” state of global land equality, saying the problem is worse than thought, rising, and “cannot be ignored.”

Among the key findings is that the largest 1% of the world’s farms operate 70% of farmland and “form the core of production for the corporate food system.” What’s more, “given the trends in the agriculture and food systems, land consolidation will inevitably increase further.”

The warning is laid out in “Uneven Ground: land inequality at the heart of unequal societies.” Released by the International Land Coalition in collaboration with Oxfam, the publication synthesizes new research and existing data and shows how land inequality is linked with other issues including poverty, intergenerational justice and migration, environmental degradation, and the climate crisis.

“These findings radically alter our understanding of the extent and far reaching consequences land inequality has, proving that not only is it a bigger problem than we thought but it’s undermining the stability and development of sustainable societies,” said Ward Anseeuw, a co-author of the report.

The shocking reality of #LandInequality

According to the analysis, the issue of land inequality should encompass a broader range of dimensions than typically used to capture not only differences in land ownership but other factors such as the size and quality of land and the ability to have real decision-making power over how the land is used.

The report lays out the scope of the issue:

Land is a common good, providing water, food, and natural resources that sustain all life. It is the guarantor of biodiversity, health, resilience, and equitable and sustainable livelihoods. It is immovable, non-renewable, and inextricably connected to people and societies. How we manage and control land has shaped our economies, political structures, communities, cultures, and beliefs for thousands of years.

Who gets that control is not decided by accident, says Giulia Baldinelli of ILC and co-author of the report.

“What we’re seeing is that land inequality is fundamentally a product of elite control, corporate interests, and political choices. And although the importance of land inequality is widely accepted, the tools to address it remain weakly implemented and vested interests in existing land distribution patterns, hard to shift,” Baldinelli said in a statement.

The impacts of the imbalance are far-reaching, with links stretching to the coronavirus pandemic. From the report:

Covid-19 is the latest zoonotic disease to emerge from a combination of unsanitary animal farming and pressure on wildlife populations. While its main impact has been on urban populations, Covid-19 has further exposed inequalities faced by land-disadvantaged groups, such as indigenous peoples, lower castes, the elderly, women, youth, and migrants, as well as casual workers (common in agribusiness) and landless tenants (UNDP, 2020; FAO, 2020; ILC, 2020). Land inequality diminishes resilience to disease shocks and, at a household level, may lead to loss of shelter and lack of access to infrastructure and services, traditional community networks, and institutions of social reciprocity. Women’s resilience and coping strategies are limited by weaker land rights, which puts them at even greater disadvantage in these situations, with a knock-on effect on children and youth in their households (FAO, 2020; FAO, IFAD and UNIDO, 2016). Land grabbing and forced evictions have been documented in the context of Covid-19 (ILC, 2020), exacerbating land and land rights inequalities, particularly in societies that are heavily policed.

“As we move towards a post-Covid world, we will see increased pressure for fast economic gain at the expense of people and nature,” warned Mike Taylor, director of the International Land Coalition Secretariat He added that “there is always, however, a more inclusive path to rebuilding our economies, that emphasizes sustainable use of natural resources, respects human rights, and addresses systemic causes of inequality.”

While low-income countries have seen an “increasing number of mega-farms, each taking up thousands, even tens of thousands, of hectares,” the issue of land inequality stretches globally. “After 1980, in all regions, land concentration has either been increasing significantly (North America, Europe, Asia, and the Pacific) or a decreasing trend is being reversed (Africa and Latin America),” the report finds.

In North America, for example, the report points to the decades between 1960 and 1990 when there was a “drastic increase in land and agricultural concentration” and the number of farms plummeted by 1.6 million, dropping to 2.1 million. The same time period also saw the average farm size swell from 122.6 hectares to 187 hectares.

Although there has been a more recent stabilization in the number of farms in North America, that doesn’t capture the whole story:

What the figures on farm size do not reveal, however, are the even more substantial increases in the concentration of large-scale production on a shrinking number of farms. Almost 1 million farms (980,000) in the USA have less than ,000 in sales per annum, while the largest 7% of farms account for 80% of production value (MacDonald, 2016). This leaves a situation where some 1.3 million, or 60%, of the farms in the USA produce only 6.6% of the total production value (Gollin, 2019). These include farms of below five hectares, many of which are known as “retirement farms” or “off-farm occupation farms,” with owners who do not depend on agricultural production for their livelihoods.”

So what is to be done?

“A transformative agenda of this magnitude is not optional,” the report concludes. “It is urgent and is in the interests of all humanity, for more resilient, sustainable, and equitable societies.”