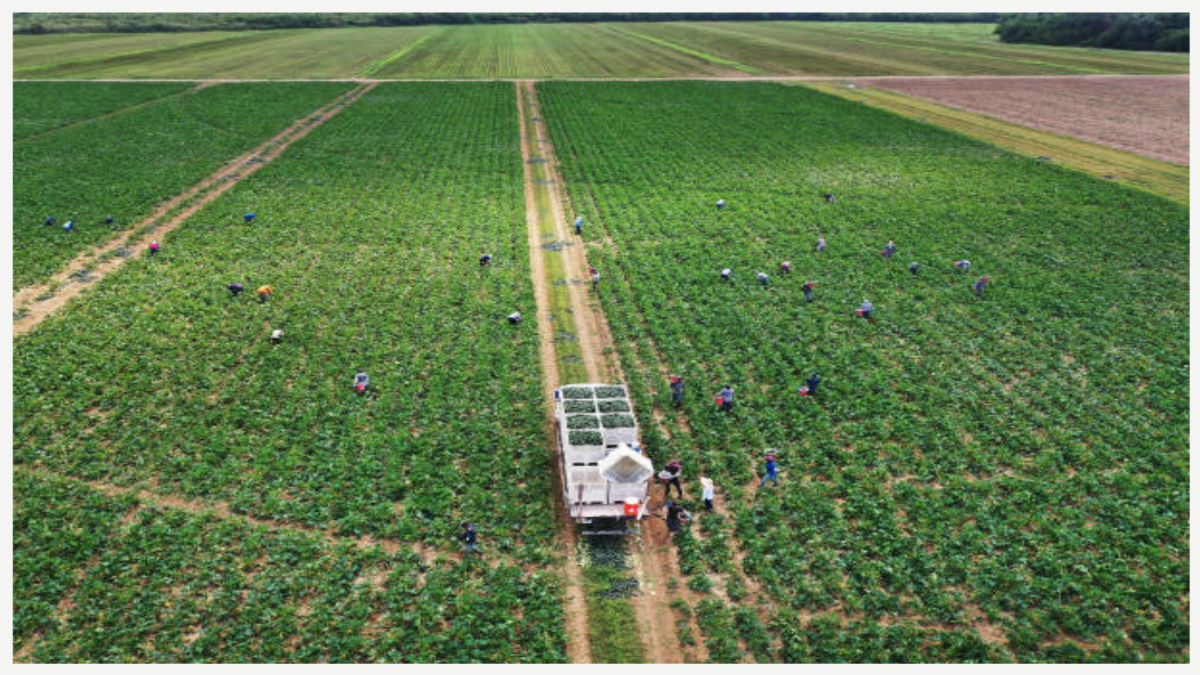 This opinion piece was originally published by Yes! Magazine on March 30, 2020.

As the coronavirus crisis has laid bare, the U.S. urgently needs a strategic plan for farmland. The very lands we need to ensure community food security and resilience in the face of crises like this pandemic and climate change are currently being paved over, planted to chemically raised feed grains for factory farm animals, and acquired by institutional investors and speculators. For far too long, the fate of farmlands has flown under the radar of public dialogue—but a powerful new proposal from think tank Data for Progress lays out how a national strategic plan for farmland could help boost economic recovery while putting the U.S. on a path to carbon neutrality.

The new Data For Progress memo builds on the Green New Deal resolution—a sweeping proposal to build out a carbon neutral economy, inspired by the package of Roosevelt administration social policy that lifted the United States out of the 1930s Depression and created the largest middle class in history. The Green New Deal, advocates say, would mobilize similar infrastructure and jobs programs, but with a focus on climate mitigation and resilience, and a more broadly construed focus on equity. (While the original New Deal met many goals expressed by organized labor, it failed to address racial inequality).

Yet this latest Data for Progress memo, published today, hearkens back several decades before Roosevelt’s presidency. Reopening conversations that were front and center during Abraham Lincoln’s time in the White House, the memo proposes one of the most promising strategies yet offered for meeting climate targets while building broad-based economic prosperity: a systematic national policy to facilitate land access for small farmers.

Farmland ownership has not followed the path that President Lincoln envisioned, explains the memo’s co-lead author Meleiza Figueroa, a Ph.D. candidate in geography at University of California, Berkeley and faculty-owner of the Birmingham-based Cooperative New School for Urban Studies and Environmental Justice. When Lincoln signed the Homestead Act in 1862, he promised small tracts of land to family farmers. Following emancipation, the Lincoln administration also promised “40 acres and a mule” to formerly enslaved Africans.

However, land speculators cheated from the beginning of the homestead era, gobbling up multiple claims under different names. And “40 acres and a mule” were never provided to emancipated slaves, as President Andrew Johnson rescinded the promise after Lincoln’s assassination. Homestead claims trickled to a close in the early 1900s, and the federal government backed out of land policy, letting the market take its course. “When you look at the history of injustice in this country,” Figueroa says, “it’s all about land.”

In the century-long absence of a coherent U.S. policy framework for farmland, Figueroa and her coauthors point out, several worrying trends have developed. For one, prime farmland has been paved over. According to the American Farmland Trust, 25.1 million acres of U.S. agricultural land—nearly the size of the state of Ohio—was converted to developed uses between 1982 and 2015.

Such land use change has significant climate implications. A 2012 University of California, Davis study that compared an acre of urban land to an acre of irrigated cropland found that the urban land generated 70 times as many greenhouse gas emissions. There’s also an opportunity cost: Land-based carbon sequestration strategies like agroforestry and cover cropping can’t be adopted if the land is under concrete.

Second, the memo points out, what farmland remains has become ever more concentrated in the hands of large farms and institutional investors. A mere 3.2% of U.S. farms account for 51% of the total value of the nation’s agricultural production. Forty percent of U.S. farmland is rented, discouraging sustainable agricultural practices that require long-term management and secure land tenure. And farmers make up just 1.3% of the U.S. workforce.

“There’s an assumption out there that this is just the forward march of progress,” Figueroa says. ” ‘Who wants to be a farmer anymore?’ Actually, a lot of people want to be farmers now—especially young people who are aware of the effects of climate change and also not satisfied by alienating office labor. Why not offer the opportunity for meaningful and gainful work that is beneficial to everybody, to people and planet?”

Racial Injustice Plays Out on the Land

The absence of a coherent U.S. land policy can be blamed for some of the current problems with farmland concentration, say the authors of the Data for Progress memo. But co-lead author Leah Penniman, founding co-director of Soul Fire Farm in Upstate New York, argues that the U.S. government has had a very influential de facto land policy over the past century, even if it wasn’t articulated as such. “The very basis of U.S. land policy is rooted in the theft of land and the exclusion of people of color from land,” Penniman explains. “This, of course, started with the genocidal stealing of almost the entire continent from the stewardship of Indigenous people … [and] throughout much of our history, there have been various state-level property ownership requirements that excluded people of color from being able to own property.”

Given that the average age of the American farmer is 57, and a significant share of the nation’s farmland will soon change hands, Penniman and her co-authors argue, Americans have a short window of opportunity to rectify this unjust history while ensuring that farmland is conserved and that farmers have opportunities to combat climate change.

A Diverse Coalition for Reform

The diverse coalition mobilizing around these shifts to farm policy is notable: Contributors to the Data for Progress memo range from staffers at predominantly white farm state groups like National Family Farm Coalition and Family Farm Defenders to racial justice leaders like Penniman and Figueroa to academics focused on economic policy.

What these diverse constituencies share, the memo’s authors explain, is that they’ve all gotten the short end of the stick of land consolidation and are struggling to survive. Ironically, many family farmers have accumulated significant land over the past generation or two but are less economically secure, as they’ve taken on debt to keep up with the treadmill of overproduction stimulated by current agriculture policy.

“We need to give current family farmers, who are mostly white, a lot of credit,” Penniman says. “Nobody wants to be complicit in racism and in that kind of harm and exclusion. I think it’s in our best interest as a nation not to pretend that we’re all the same or that we all need the same policies, but to really look truthfully at what needs to change. And we’ve found that having these honest conversations in our communities often leads to common ground.”

As for how to turn this common ground into policy change, the memo’s authors outline a couple different pathways. The ‘low hanging fruit’ option, explains contributor Adam Calo, a researcher at the James Hutton Institute in Scotland, would be to expand three separate kinds of existing policies. For one, Calo believes, the U.S. should ramp up efforts to conserve farmland and protect it from development while limiting land investment by large corporations. Second, programs that incentivize farmers to use regenerative agricultural practices that combat climate change should be dramatically scaled up. The third and critical piece of this policy triad, Calo emphasizes, is equity: the U.S. must strengthen and enforce policies that ensure “Socially Disadvantaged Farmers” (the USDA’s term for farmers subjected to racial discrimination) have equal access to all farm programs and particular set-asides to redress historic injustices.

More ambitious and transformative, the memo’s authors suggest, would be to combine these objectives with a fully integrated land policy. Such a policy would include public land banks that could acquire land from retiring farmers and provide affordable access for farmers of color, new farmers, and farm cooperatives who pledged to use sustainable practices. It would also include a land commission, anchored by community-based institutions led by people of color, that would periodically assess that state of farmland access and make policy recommendations.

Figueroa is excited about these more far-reaching approaches, which she sees as opportunities to mobilize the underutilized climate response potential in Black and brown communities. “How many Oaxacan farmers are in apartment buildings right now?,” Figueroa asks. “If you gave them land, they know what to do with it. It’s not like they forgot what to do with it once they crossed the border.”

But getting farmers on land isn’t enough, Figueroa and her coauthors emphasize. A successful Green New Deal for farmland must help ecological farmers stay on the land—and thrive. Penniman points to the success of payment for ecosystem services policies like those in Costa Rica, where farmers are compensated for providing environmental benefits on behalf of society—benefits like maintaining pollinator habitat, preventing soil erosion, and sequestering carbon. We already have such programs in the U.S., including the Environmental Quality Incentives Program and the Conservation Stewardship Program, but they are funded at much lower levels than other farm programs that predominantly support industrial agriculture.

Overhauling farm programs by shifting current subsidies to instead compensate farmers for climate-beneficial practices—and establishing public procurement and supply management—would allow current family farmers to earn more money on fewer acres. At the same time, it would enable farmers to produce more human food (rather than biofuels and feed grain for factory farms) and provide more public benefits (such as drawing down emissions and improving watershed health). Remaining and degraded acres no longer needed by these now much more viable farms could be transitioned into land banks like those envisioned by the Data for Progress team, offering a just transition for both existing family farmers and landless farmers looking to contribute to climate mitigation and community food security by stewarding land.

“It’s a win-win,” Figueroa says. “People who want to put their labor into agriculture and struggling farmers who want support can actually join together as a community.”