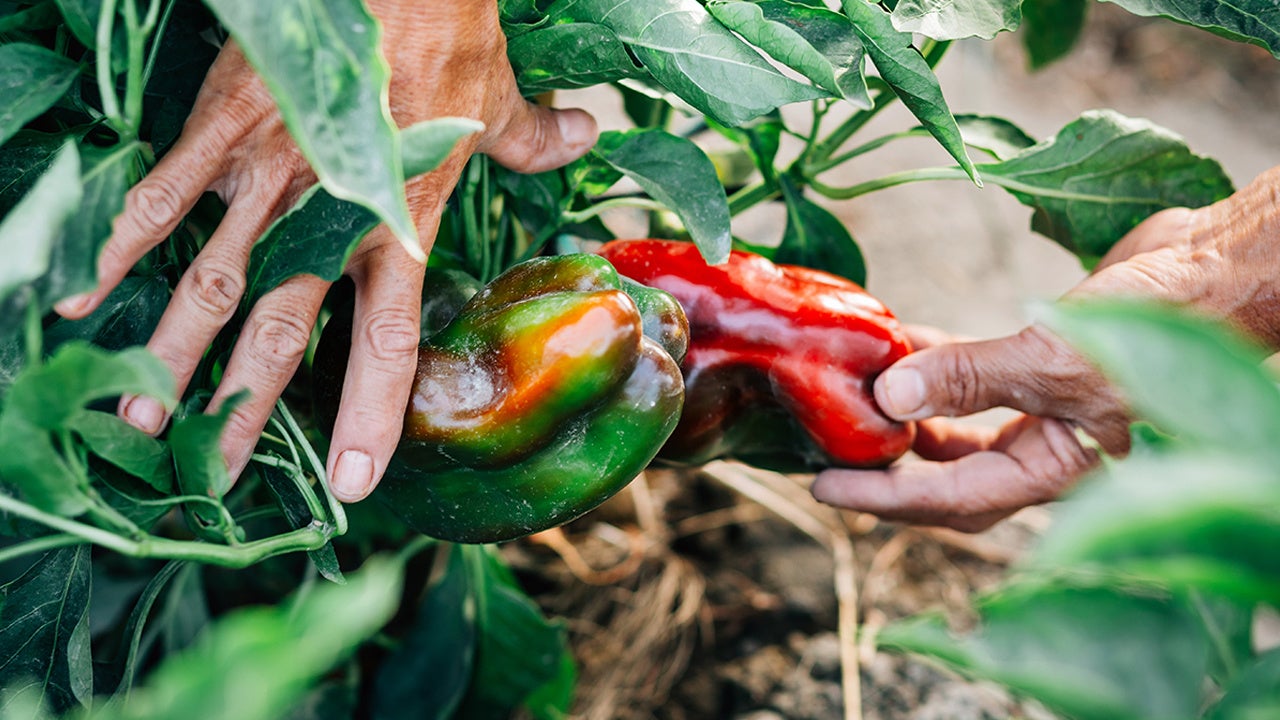 Would it sound too good to be true if I was to say that there was a simple, profitable and underused agricultural method to help feed everybody, cool the planet, and revitalize rural America? I used to think so, until I started visiting farmers who are restoring fertility to their land, stashing a lot of carbon in their soil, and returning healthy profitability to family farms. Now I’ve come to see how restoring soil health would prove as good for farmers and rural economies as it would for the environment.

Over the past several years, I drove through small towns from Ohio to the Dakotas visiting farmers to research Growing A Revolution, my book about restoring soil fertility through regenerative farming practices. Along the way, I saw a microcosm of the national economy in which run-down farms and hollowed-out towns stood in stark contrast to farms and communities thriving with renewed vitality.

These revitalized farms came in all sizes — hand-worked three-acre vegetable farms to horizon-spanning ranches where enormous remote-controlled contraptions seemingly cast out of Star Wars seeded and harvested fields with GPS-guided precision. Yet it was not size or technology that distinguished these places, but how they worked the land.

After the Second World War, an expanded reliance on chemicals boosted the yields from soils degraded during decades of intensive farming. At the same time, American farmers increasingly specialized in and became very good at growing a large amount of a small selection of crops. This newfound bounty manifest as a surplus of corn, wheat, and other agricultural commodities. Over time, this drove down the price farmers got for their harvest as the cost of fertilizer, diesel, and pesticides rose — squeezing farmers in the middle.

From 1960 to 1970 corn prices rose from just over to a bushel — the equivalent of about in inflation adjusted dollars today. In 2019, however, corn prices have stayed around a bushel, so farmers are getting half of the real income for growing the same harvest as they did when we put a man on the Moon. At the same time the inflation-adjusted price of a barrel of oil tripled from about in 1970 to more than today. Over the same period, global fertilizer prices roughly doubled. Today’s conventional farmers spend a lot more to grow crops they can sell for far less than their grandparents did.

The mantra became “get big or get out” as the average size of American farms grew. The number of farms declined as smaller ones were consolidated or went out of business. Small towns struggled to retain people, and economic vitality declined in rural areas as a smaller population supported fewer services and local businesses. Driving through America’s heartland today, it’s hard to miss the fallout: shuttered stores, closed restaurants, and half-vacant mini-malls.

Interviewing farmers who had already improved their soil, I found hope that we might turn around this almost century-long trend and economically revitalize rural America. Their practices not only restored soil health, but returned profitability to family farms in the span of a few years, as opposed to the decades you would expect.

If we restore soil health and save farmers substantial input costs, we can restore smaller farms as a means to a secure living and revive the economic viability of farming communities across small town America.

So how did those farmers do it?

The successful regenerative farmers I visited all combined three unconventional practices that cultivate beneficial soil life: They parked their plows, planted cover crops, and grew complex crop rotations. Some also reintroduced livestock to their fields, employing a shifting mosaic of single-wire electric fences to frequently move cattle and implement regenerative grazing methods. These farmers were rethinking how they saw and treated their land.

This combination of unconventional practices — no till, cover crops, and complex rotations — allowed farmers to use far less fertilizer, pesticide, and diesel to grow and harvest as much, if not more, than they did growing one or two crops under conventional farming practices. At conferences, other farmers related how it took just a couple of years for this new farming system to rebuild soil fertility enough to become more profitable than neighboring conventional farms. From then on, these regenerative farmers spent less money to grow more, a surefire recipe for a better bottom line.

I could see the difference around the countryside. In parts of the Dakotas where no-till and cover crops had been widely adopted, the landscape was dotted with new grain silos and barns. Shiny new pickup trucks streamed by on the roads. But in counties where black dirt fields still marred the view, things looked worn down and worn out, and topsoil blew across the highway. In Kansas, I was struck by the contrast between bright, well-maintained equipment dealerships in counties that had gone no-till, and sad lots of rusting gear in those counties still hitched to the plow.

Regenerative agriculture is not just about restoring the life of the soil. By making smaller farms profitable once again, it could bring more people back to the land and thereby boost the economy in small towns across America.

You don’t have to take my word for all this.

These points are backed up by a recent paper by Claire LaCanne and Jonathan Lundgren who compared regenerative and conventional corn fields on 20 farms in North and South Dakota, Nebraska, and Minnesota. They ranked farms from most regenerative to most conventional based on whether farmers tilled, planted cover crops, used insecticides or other pesticides, and let cattle graze off cover crops and crop stubble. They then divided them into two groups of fields: regenerative fields that were not tilled, received no insecticides, and included livestock grazing; and conventional fields that were tilled at least annually, regularly received insecticides, and had bare soil in between cash crops.

For each field, LaCanne and Lundgren measured the amount of organic matter in the soil, pest insect populations, corn yield, expenses, and profit. What they found directly contradicts key tenets of conventional agriculture. They found that pest insects (such as corn rootworms, European corn borers, Western bean cutworm, other caterpillars, and aphids) were 10 times as abundant on conventional farms that used insecticides than on farms that relied on regenerative, pest-resilient cropping systems with no insecticides. The lower pest abundance in regenerative fields was likely due to competition from greater insect diversity, and because insecticide use kills predatory insects (like ladybugs) capable of keeping pests in check. This becomes a problem because pest populations rebound before their predators.

LaCanne and Lundgren also found that regenerative corn fields were almost twice as profitable as conventionally managed corn fields due to lower seed and fertilizer costs, a price premium if the crops are organic, and the added value of cover crop grazing for meat production on the regenerative fields. The profitability was unrelated to grain yield, but positively correlated with soil organic matter. In other words, restoring soil paved the way to restoring farm profitability. A profitable farm was less about how much the farmer grew and more about how they treated their soil.

Other studies have also found higher economic returns from adding cover crops to no-till systems in order to improve soil health. One example comes from a four-year study of the economic impacts of cover crops conducted by the National Association of Conservation Districts and Datu Research on a farm in northwestern Missouri. Over the course of the study, cover crops averaged a positive return of per acre among all fields, and reached up to 0 an acre in some places. The cost of cover crop seeds and planting was more than offset by lowering fertilizer costs by up to per acre, increasing corn yields from 120 bushels to 153 bushels per acre, and raising soybean yields from 38 bushels to 52 bushels per acre.

Such results are not an anomaly. In 2019, the USDA’s Sustainable Agriculture Research and Education (SARE) program released a report on cover crop economics based on data from several hundred farms that concluded cover crops generally provide a positive return within three years and that profit margins continued to grow for at least seven years. Corn and soybean yields were consistently higher in cover cropped fields, especially in drought years. Such examples show that spending less to grow more is a winning combination for farmers.

Whether on large commodity crop operations or on small boutique farmsteads supplying farmers markets and restaurants, the key to a more profitable farm lay in the health of the soil. And we need more small farms near cities to provide fresh foods and vegetables, much as we need regenerative grain and dairy and grazing farther afield. Bringing life back to the soil can help farm profitability across America’s rural landscapes. It’s time to reverse and revise the “get big or get out” mentality to “get small and get back in.” Restoring the soil on smaller, more profitable farms holds the key to restoring rural communities.

The soil is the historical root of American prosperity, the foundation of our country. But since the American Revolution, our nation’s soils have lost half their organic matter — half their natural fertility. Policies that promote efforts to rebuild healthy soils offer fertile ground to help restore prosperity to family farms and farming communities. Reinvesting in our soils is a natural infrastructure program, a sound investment in the foundation and future of America. This would not only put a lot of carbon in the ground, it would reduce the environmental damage from agrochemical use and help bring life back to the land and rural communities. Having more people on the land isn’t the problem, it’s the solution.