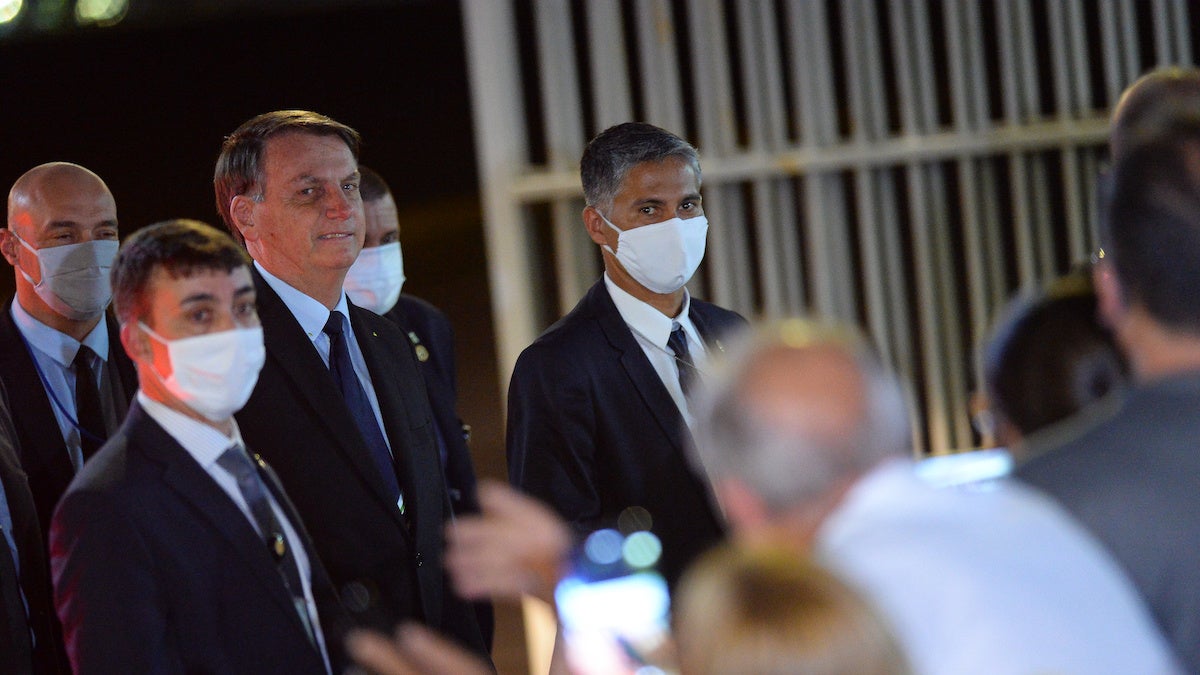 Brazil President Jair Bolsonaro speaks with supporters at Alvorada Palace on June 05, 2020 in Brasilia, Brazil. Brazil has over 614,000 confirmed positive cases of Coronavirus and OVER 34,000 deaths. Andressa Anholete / Getty Images

President Donald Trump isn’t the only world leader who has been criticized for sidelining science in the wake of the coronavirus pandemic.

Brazil’s Health Ministry removed the total number of coronavirus cases and deaths from a government website Saturday, Reuters reported. And health ministry employees told local media that the scrubbing was ordered by far-right President Jair Bolsonaro, according to The Guardian.

“The manipulation of statistics is a manoeuvre of totalitarian regimes,” Supreme Court Judge Gilmar Mendes tweeted in response. “The trick will not exempt responsibility for the eventual genocide.”

The government coronavirus tracking website was taken down Friday and reloaded Saturday with only data on cases, deaths and recoveries in the past 24 hours, according to Reuters.

“The cumulative data … does not reflect the moment the country is in,” Bolsonaro tweeted, as Reuters translated. “Other actions are underway to improve the reporting of cases and confirmation of diagnoses.”

However, the website change comes as Brazil battles one of the worst coronavirus outbreaks in the world, BBC News reported. It has more than 640,000 confirmed cases, behind only the U.S., and more than 35,000 deaths, the third largest death toll after the U.S. and the UK. The move also came after the country reported more than 1,000 deaths for four days in a row.

The website change was widely condemned by journalists, members of Congress and public health officials.

“The authoritarian, insensitive, inhuman and unethical attempt to make those killed by Covid-19 invisible will not succeed. We and Brazilian society will not forget them, nor the tragedy that befalls the nation,” the president of Brazil’s national council of state health secretaries Alberto Beltrame said in a statement reported by The Guardian.

Bolsonaro has consistently downplayed the pandemic, calling it a “little flu” and arguing against lockdown measures, according to BBC News. On Friday, he threatened to exit the World Health Organization.

Before the website change, the government was also criticized for pushing back the publication of its daily virus update from 5 p.m. to 10 p.m., according to Reuters.

In response, head of the Brazilian Press Association Paulo Jeronimo de Sousa accused the government of “trying to silence the press at this late hour.”

“Transparency of information is a powerful instrument for combating the epidemic,” he wrote, according to Reuters.

Also like the Trump administration, the Bolsonaro government has used to coronavirus crisis to accelerate its deregulatory environmental agenda.

Environment Minister Ricardo Salles said in April the pandemic was a good time to loosen protections.

“We need to make an effort here during this period of calm in terms of press coverage because people are only talking about Covid,” he said, as The New York Times reported.

Lax law enforcement because of the outbreak has led to increased deforestation in the Amazon rainforest in recent months, The New York Times reported Monday. This is likely to lead to even worse wildfires than the ones that devastated the forest last summer.