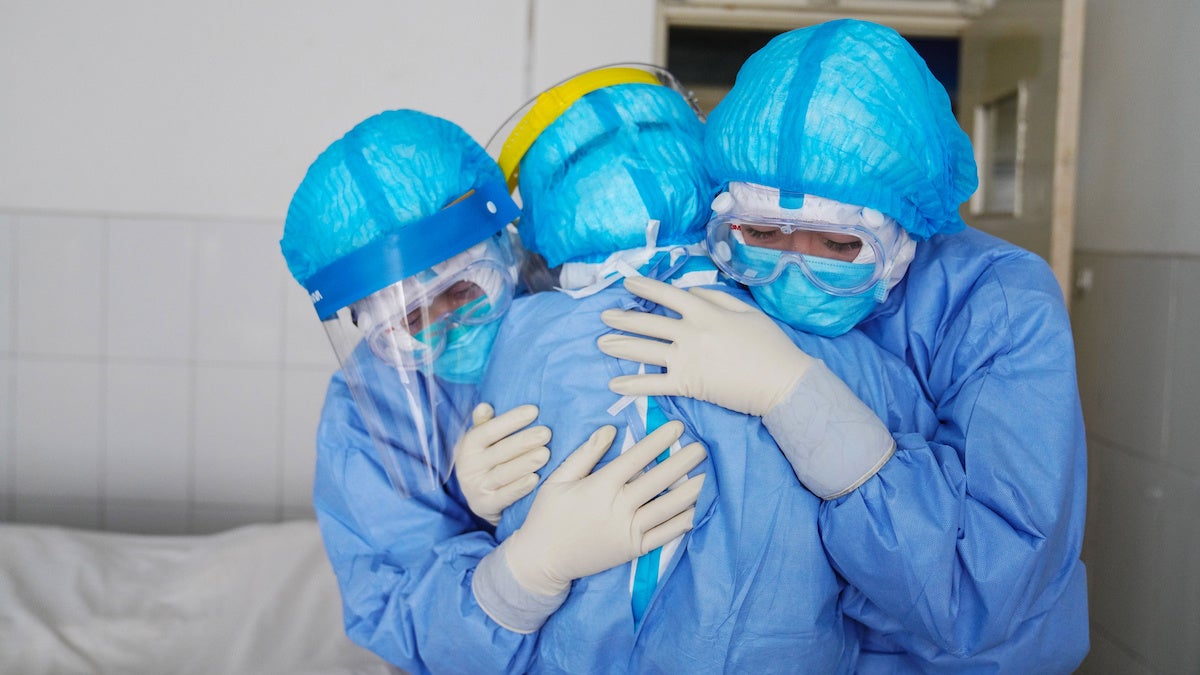 Medical workers hug each other in an isolation ward at a hospital in Zouping in China's easter Shandong province on Jan. 28, 2020. STR / AFP via Getty Images

The world passed two troubling milestones Sunday, as the number of confirmed coronavirus cases topped 10 million and the number of deaths surpassed 500,000.

This means the death toll has doubled in less than two months, The New York Times pointed out, from 250,000 in early May. In April, it topped 100,000. The number of confirmed cases, meanwhile, has doubled in 40 days.

“It’s a startling number,” Cedars-Sinai Medical Center in Los Angeles chief medical officer Richard Riggs told Bloomberg News of the 10 million caseload. “It seems like it’s going to continue for quite some time.”

The number of confirmed cases is likely well under the real tally, according to The New York Times. Centers for Disease Control and Prevention (CDC) data released last week found that the case load could be as much as ten times higher than reported in some regions, and New York Times investigations revealed an underreporting of the death toll in the U.S. and more than a dozen other countries, since inadequate testing makes it hard to confirm that patients died of COVID-19.

The U.S. continues to lead the world in both confirmed cases and deaths, with more than 2.5 million cases and more than 125,000 fatalities, according to data from Johns Hopkins University. Brazil follows with more than 1.3 million confirmed cases and 57,000 deaths. Both U.S. President Donald Trump and Brazilian President Jair Bolsonaro have been criticized for downplaying the seriousness of the outbreak and undermining accurate scientific information about its treatment and spread. Together, the two countries account for 49 percent of new infections, according to World Health Organization data reported by Bloomberg News.

The U.S. accounts for more than a quarter of all known deaths, according to The New York Times. And infections are increasing in 29 of 50 states, The Guardian reported. The country reported 44,000 new cases by 4 p.m. on Friday, the highest daily increase since the pandemic began. While the U.S. outbreak was initially centered in the Northeast, with New York City emerging as an early epicenter, cases have now shifted to states in the South and West, The New York Times reported. Texas, Arizona and Florida are especially hard-hit and have been forced to pause reopening plans, according to Bloomberg.

Administration officials including Vice President Mike Pence have attributed the surge in U.S. cases to an increase in testing, The New York Times reported, but public health experts say this is not the case. One of the reasons is that the percentage of tests turning up positive results is also on the rise. The positivity rate in Los Angeles rose from 5.8 percent two weeks ago to nine percent Saturday, while the rate in Texas nearly doubled from seven percent two weeks ago to 13 percent Friday.

Worldwide, Brazil and India are both battling significant outbreaks, with each reporting more than 10,000 new cases a day, according to The Guardian. And China, where the outbreak began, has put a province near Beijing under strict lockdown to control an outbreak there.

The current global caseload dashes hopes that the outbreak would weaken in the summer, Bloomberg News pointed out, but health experts warn that things could still worsen in the fall, especially in Northern countries that will also have to contend with flu season.

“We haven’t seen the end of Covid-19, and we haven’t seen the full scope of it yet, either,” professor of health metrics sciences at the University of Washington Ali Mokdad told Bloomberg News. “This will be as dangerous as the Spanish flu in many ways.”