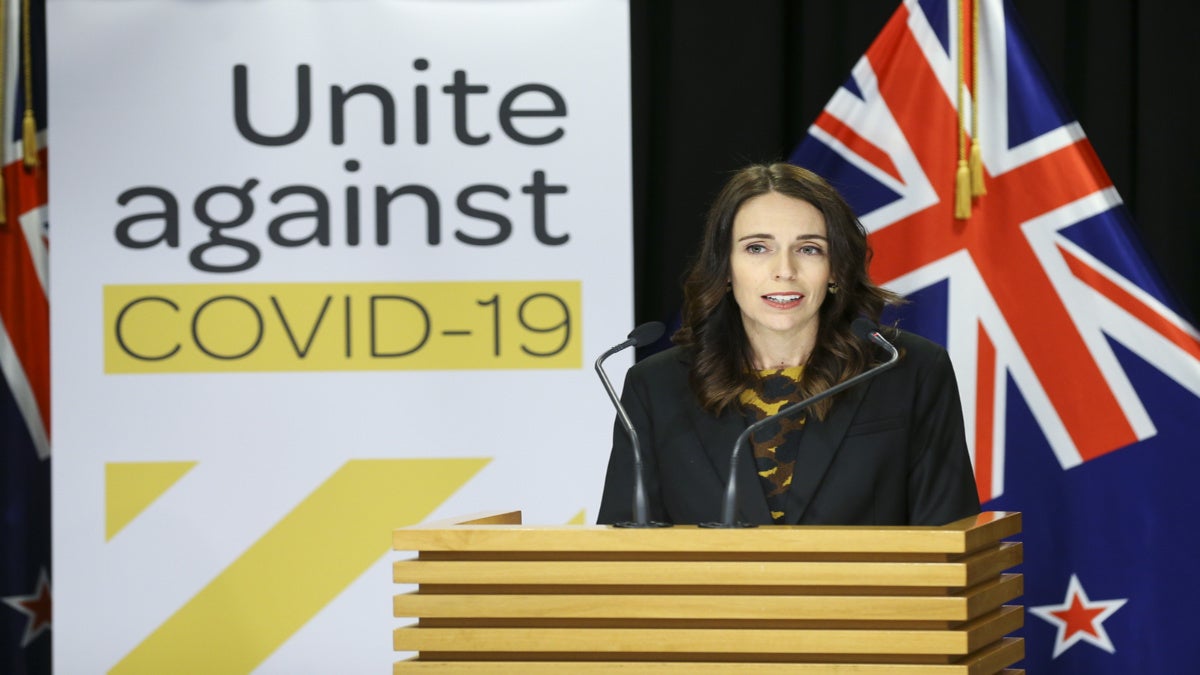 New Zealand Prime Minister Jacinda Ardern speaks to media at a press conference ahead of a nationwide lockdown to combat the ongoing COVID-19 pandemic at Parliament on March 25, 2020 in Wellington, New Zealand. Hagen Hopkins / Getty Images

Five weeks after launching an aggressive nationwide lockdown to combat the coronavirus pandemic—coupled with one of the most robust economic relief packages of any country—New Zealand’s government on Monday announced that the new coronavirus is currently “eliminated” in the nation.

The country’s Prime Minister Jacinda Ardern said Monday that while cases are not at zero, new cases have been in the single digits for the past several days—an “incredible” statistic, said Ardern, as other countries face thousands of new cases per day.

“We have done what very few countries have been able to do,” Ardern said last week as the country was preparing to move from a Level 4 restrictions to Level 3, allowing some businesses to reopen. “We have stopped a wave of devastation.”

One new case was reported Monday, as well as four “probable cases” and one new death.

“We’ve achieved our goal of elimination… That never meant zero but it does mean we know where our cases are coming from,” Director General of Health Ashley Bloomfield said.

As the country reduces restrictions to Level 3, businesses that reopen will be required to maintain physical distancing rules. Schools will reopen with limited capacity, and workers will still be encouraged to work from home if they are able to. Events such as weddings and funerals will only be able to take place with up to 10 people in attendance, and public buildings such as museums, libraries, and gyms will remain shuttered for the time being.

New Zealand has confirmed a total of 1,469 cases of COVID-19, the disease caused by the new coronavirus, since the first case there was detected on February 28.

The numbers in the island nation contrast sharply with those in the U.S., where nearly one million people have been sickened—nearly 300 in every 100,000—and more than 50,000 people have died.

Ardern has been credited with enforcing a strict lockdown even before the disease had claimed any lives in New Zealand. Two weeks after the first case was reported, the prime minister ordered anyone entering the country to self-quarantine for 14 days. Most businesses shut down on March 23, when there were 102 cases and no deaths, and the country began enforcing Level 4 restrictons—forbidding people to leave home except for outdoor exercise nearby—on March 25.

Ardern’s extreme measures were in line with the recommendations of top public health officials, including U.S. National Institutes of Health Director Francis Collins, who said last month that the measures most effective at slowing the outbreak would likely be seen as “too drastic” by many.

New Zealand has also been testing the public at one of the highest rates in the world, Ardern said Monday, administering nearly 124,000 tests in recent weeks with the capacity to complete 8,000 tests per day. The U.S. has increased its testing capacity in the past month, but public health experts say the severe lag in confronting the pandemic in the U.S. after the first case was reported there in January has made the disease difficult to contain.

On social media, observers noted the stark contrast between the two countries’ approaches, with government watchdog Public Citizen saying the United States’ response has been marked by the “unending incompetence” of the Trump administration.

Coronavirus eliminated in New Zealand due to quick and decisive action by the Jacinda Ardern government. #COVID19 https://t.co/nKKsAdWQmY

New Zealand paired its orders for the country to stay at home for five weeks with a major relief package amounting to about 4% of the country’s GDP—a far more significant spending plan than other wealthy countries.

The government covered wages for all New Zealanders who had to self-isolate but couldn’t work from home or were caring for sick family members. Businesses were also offered subsidies to continue paying employees, and the government doubled its healthcare spending.

Public health agencies were given resources for contact-tracing to determine who ill people could have potentially spread the disease to, while hospitals received support to increase intensive care units.

“This package is one of the largest in the world on a per capita basis,” Grant Robertson, New Zealand’s finance minister, said in March as the package was announced.

Meanwhile in the U.S., President Donald Trump has largely left it up to states to determine how to approach lockdowns, and several states have begun reopening their economies—even though the testing rate in the U.S. is lower than New Zealand’s and thousands of new cases are being reported per day.

“The earlier and more decisively governments acted, the sooner they can responsibly ease their lockdowns,” columnist George Monbiot tweeted. “Unlike New Zealand’s and South Korea’s, our government dithered and delayed. As a result, we’re now in a terrible mess.”