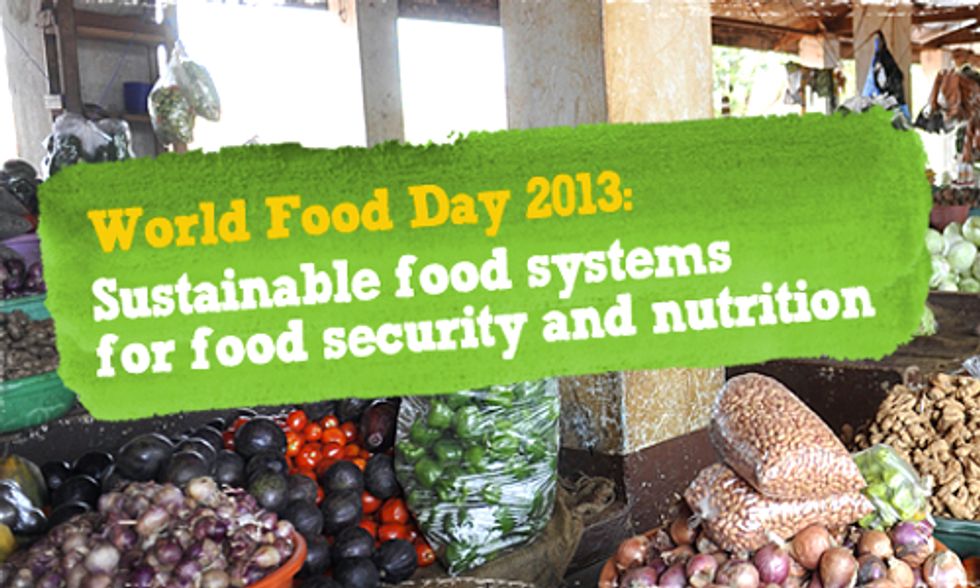 “Here's the single most important thing you need to know about the IPCC (Intergovernmental Panel on Climate Change) report: it's not too late. We still have time to do something about climate disruption. The best estimate from the best science is that we can limit warming from human-caused carbon pollution to less than 3.6 degrees Fahrenheit—if we act now. Bottom line: our house is on fire. Rather than argue about how fast it's burning, we need to start throwing buckets of water.”—Michael Brune, director, Sierra Club, Sept. 27.

Michael Brune is right. Our house is on fire. We’d better start throwing buckets of water.

Today, World Food Day, I urge everyone who wants to help put out the fire to take a close look at the food you eat. Where did it come from? How was it grown or raised? What did it take to get it from the farm to your table?

These questions are rarely part of the climate change debate. Yet they should be.

Transportation, manufacturing and energy corporations are considered major greenhouse gas (GHG) polluters. Climate scientists agree that if we want to cool the earth, we have to build solar arrays and wind generators, instead of fracking wells and coal plants. We have to retrofit homes, homes, commercial buildings, factories, transportation and electrical grids. We need to walk, carpool, ride bikes, trains and buses, instead of mindlessly cruising the highways in gas-guzzling cars, trucks and SUVs.

But few people understand that the worst U.S. and global greenhouse gas emitter is "Food Incorporated." The global food and farming system of today, with its intense dependence on biotechnology, chemicals and fossil fuels, is destroying the natural capacity of plants, trees and soils to sequester the excess greenhouse gases that are cooking the planet.

The fastest route to averting a climate disaster is to drastically reduce emissions from industrial agriculture and forestry, and start sequestering billions of tons of greenhouse gases in our plants, forests and soil.

This “Great Transition” must be driven by a mass consumer rejection of factory-farmed and industrial/genetically engineered food, coupled with mass demand for products that are organic, sustainable and climate-friendly.

Most Serious Threat Ever Faced by Humans

As the most recent scientific report by the Intergovernmental Panel on Climate Change (IPCC) bluntly warns us, global warming and climate change now pose the most serious existential threat that humans have ever faced in our 200,000-year evolution.

At 395 parts-per-million (ppm) of carbon dioxide (CO2) (and 434 ppm of all GHG), and an additional 10 billion tons of carbon per year (36.7 billion tons CO2) in annual emissions from burning fossil fuels, non-sustainable agricultural practices and deforestation, we now have the most CO2, methane and nitrous oxide polluting the atmosphere that the Earth has experienced in the past three million years.

This excess of GHG pollution has already caused a significant increase in average global temperature, a rapidly warming and acidic ocean, a great extinction of countless living species, and an increasingly menacing disruption of “normal” weather patterns.

As Dr. James Hansen and other prominent climatologists warn us, global society must drastically conserve energy, reduce fossil fuel use and naturally sequester as much GHG pollution in our soils and forests as possible, in order to bring atmospheric concentrations of CO2 back down to a safe level of 350 ppm. According to Hansen, “If humanity wishes to preserve a planet similar to that on which civilization developed and to which life on Earth is adapted, paleoclimate evidence and ongoing climate change suggest that CO2 will need to be reduced from its current [level] to at most 350 ppm.”

The Arithmetic of Human Survival

Industrial farming and food production account for at least 35 percent of U.S. and global GHG emissions. (The U.S. Environmental Protection Agency’s ridiculously low estimates range from seven percent to 12 percent, while some climate scientists believe the figure could be as high as 50 percent or more). Agriculture- and biofuels-driven deforestation and draining of wetlands accounts for another 20 percent.

That makes non-sustainable agriculture and forestry practices the number one cause (55 percent) of global warming and climate disruption.

We can start by conserving energy, reducing fossil fuel use and increasing biochar production. But that’s just one side of the equation. We also need to suck 100 billion tons of carbon (through plant and tree photosynthesis) from the atmosphere and store this excess carbon in its natural sink or repository—in the plants, trees, perennial grasses and soil.

Though it rarely comes up in the climate debate, soil has tremendous potential to store CO2. And the way to get the CO2 out of the atmosphere, and into the soil, is through organic and sustainable land management (farming, ranching and forestry) practices.

The heretofore unpublicized "good news" on climate change, according to soil scientists, is that transitioning from chemical-, water- and energy-intensive industrial agriculture practices to organic farming and ranching, on a critical mass of the world's 3.5 billion acres of farmland and 8.2 billion acres of pasture or rangeland, could sequester thousands of pounds-per-acre of climate-destabilizing CO2 every year, while nurturing healthy soils, plants, grasses, trees and animals that are resistant to drought, heavy rain, pests and disease.

And as millions now understand, organic farms and ranches provide us with food that is more nutritious, richer in vitamins, anti-oxidants and essential trace minerals, and free from Genetically Modified Organisms (GMOs), pesticides, antibiotics and sewage sludge, than the food supplied by industrial farms and ranches.

How do we mobilize the global grassroots to force the thousand or so multi-billion-dollar corporations and 200 national governments who control the world to reduce, much less reverse, global warming?

To facilitate a mass transition to organic we must force the U.S. Congress, local and state governments, and major corporations to move away from business as usual, while we simultaneously build an organic and sustainable economy in our local communities and regions. We must also start planting and nurturing of several trillion trees on the 10 billion acres of forestland that remain.

Thousands of U.S. farmers and ranchers have already made this transition. Over five million backyard, market, community gardeners are now utilizing organic practices. Millions more need to do the same.

If we’re going to cool the earth, we must:

On World Food Day let’s pledge to do all of the above. Let’s commit to the Great Transition. Let’s organize at the local level and coordinate our efforts with North American networks such as the Organic Consumers Association and 350.org.

The fate of human civilization and the living Earth lies in our hands. The hour is late.