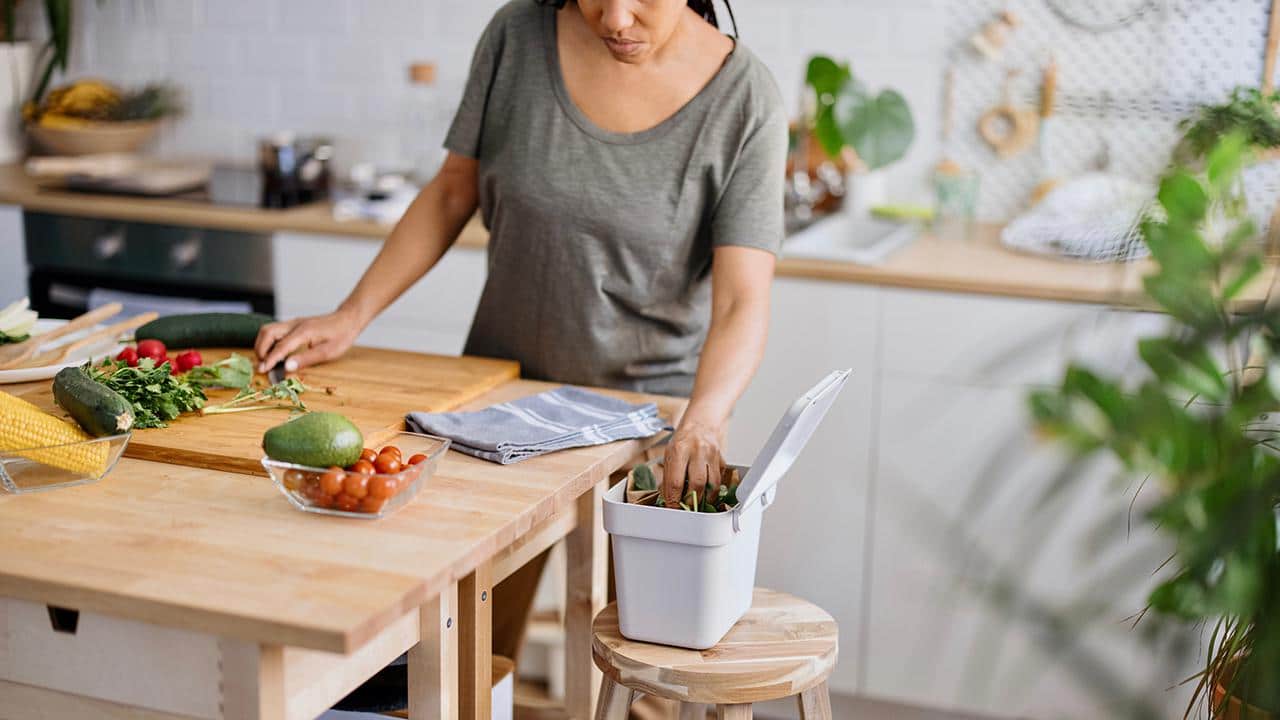 While tossing orange peels and coffee grounds in the garbage might seem inconsequential, sending food waste to landfills has a real impact on climate change. When trapped without air, decomposing food in landfills produces methane: a greenhouse gas that’s at least 80 times more powerful than carbon dioxide in the short term.

As much as we try to cut down on food waste in our kitchens, there will always be leftover banana peels, apple cores and other things that can’t be used – much of which can be diverted from landfills by composting.

Composting recycles organic material and allows for the natural processes that decompose food, yard waste and other organics to create a nutrient-rich, natural fertilizer. Compost piles heat up as microorganisms break down leaves and kitchen scraps in the presence of oxygen, giving them a second life as “black gold” to fertilize gardens, houseplants and yards. Of the waste created by the average person – generally about nine times their body weight every year – more than 30% of it can be composted.

Luckily, composting isn’t only for those with spacious backyards and large outdoor composting systems; there are plenty of options for composting with limited space, even in your own apartment.

Compost tumblers are a common composting solution, and are ideal for lucky apartment-dwellers with access to a yard, patio, or balcony. These outdoor, airtight containers don’t attract pests (a point of concern for many urban composters) and trap heat, allowing decomposition to occur much faster. Unlike traditional compost bins or piles that require shoveling, tumblers can be easily turned with a crank and are attractive and discrete for common spaces.

Add yard and kitchen scraps to the tumbler over time, giving it a few turns each week. Once the tumbler is full, stop adding new material and continue turning once every few days for two to three weeks until the contents have completely decomposed. Some people even maintain two tumblers: one to which scraps are added, and one that’s in the process of decomposing.

Ideally, to allow the compost to heat up properly and prevent undesirable odors, a composter should have a healthy ratio of “brown” (carbon-rich) and “green” (nitrogen-rich) waste. Brown waste can include leaves, shredded newspaper, nut and egg shells,and twigs, while green waste encompasses all fruit and vegetable scraps, coffee grounds, grains and soil. On a molecular level, an optimal carbon:nitrogen ratio is about 25-30:1, although some argue that when judging by sight, following a 3-4:1 ratio is sufficient.

Also known as vermicomposters, worm composters are small, efficient, odorless, require little money and effort, and result in rich, nutrient-packed compost. A DIY-worm composter can cost less than , requiring only a few plastic storage bins, organic matter for bedding, and worm castings, and can live out-of-sight in a closet or under a countertop.

Darkness, drainage and ventilation are the main components of a healthy worm composter. Start by drilling a few holes in the sides and on the bottom of a medium-sized plastic bin, and placing it inside a shorter bin or one of equal size. The smaller bin should be slightly raised, which might require stacking a few plastic bottles or containers underneath to allow for optimal airflow.

Inside the smaller bin, create the bedding for your worms; soil mixed with shredded paper or cardboard should be layered and dampened before adding in the worms. A good guideline for adding worms – generally red wigglers, which can be ordered online or bought in fishing stores – is one pound (about 1000 worms) per square foot.

Worm composters have some limitations based on what the critters can digest, and the amount of food waste that should be added at once. Freezing food scraps and adding them gradually will give the worms time to do their work without overloading them with food, especially when just starting out.

For those with very limited space, countertop electric composters are small, odorless and can process food waste within hours, producing a rich, dry fertilizer. While not exactly composting, these machines aerate, heat and pulverize food scraps, mimicking the process of traditional compost piles on a much tighter timeline – and, unlike traditional at-home compost piles, can safely process meat and dairy products.

While many electric composters can cost upwards of 0, their compact and user-friendly design makes them an attractive option for apartment-dwellers. Unfortunately, given the electricity needed to run them, the environmental impact of these composters is higher than more natural methods.

Some cities have taken food waste reduction into the own hands: San Francisco, California; Boulder, Colorado; and Portland, Oregon all have their own government-run composting initiatives. City-wide composting programs take different forms, but are often free or entail a small fee similar to trash and recycling. Residents usually fill a container with food scraps throughout the week and leave it on the curb to be replaced with an empty bucket, or bring scraps out to a designated bin alongside trash and recycling that’s collected at regular intervals. Seattle and San Francisco have even made composting mandatory for all homes and businesses.

As you begin composting, it’s a good idea to check whether your city already has a program in place for its residents.

In the absence of city-wide composting programs, many non-profit and privately-owned organizations have stepped up to the plate.

In New York City, where curbside compost collection was suspended in 2020 due to COVID-19-related budget cuts, Big Reuse – a local non-profit – partners with community organizations to host free weekly drop-off sites. If tumblers and worm composters aren’t for you, research compost drop-off locations in your city where you can bring your scraps for free. Some community gardens and farms might accept composted materials as well.

Composting has also become a lucrative business, especially in cities without government-run programs. CompostNow in North Carolina, Bootstrap Compost in Boston and WasteNot Compost in Chicago all charge a fee for pick-up services, offering a very convenient option for those without the time or space to compost at home.

​Between trips to the compost tumbler or drop-off site, you’ll need somewhere to store your scraps.

While a simple Tupperware container or glass jar would do, many countertop compost bins are attractive and discrete while controlling odors. Some are even dishwasher safe or use replaceable filters to prevent any smells from escaping.

When the pail fills up, scraps can be stored in the freezer until drop-off or pick-up day. Designating a container in the freezer specifically for compost can also keep things tidy and organized. 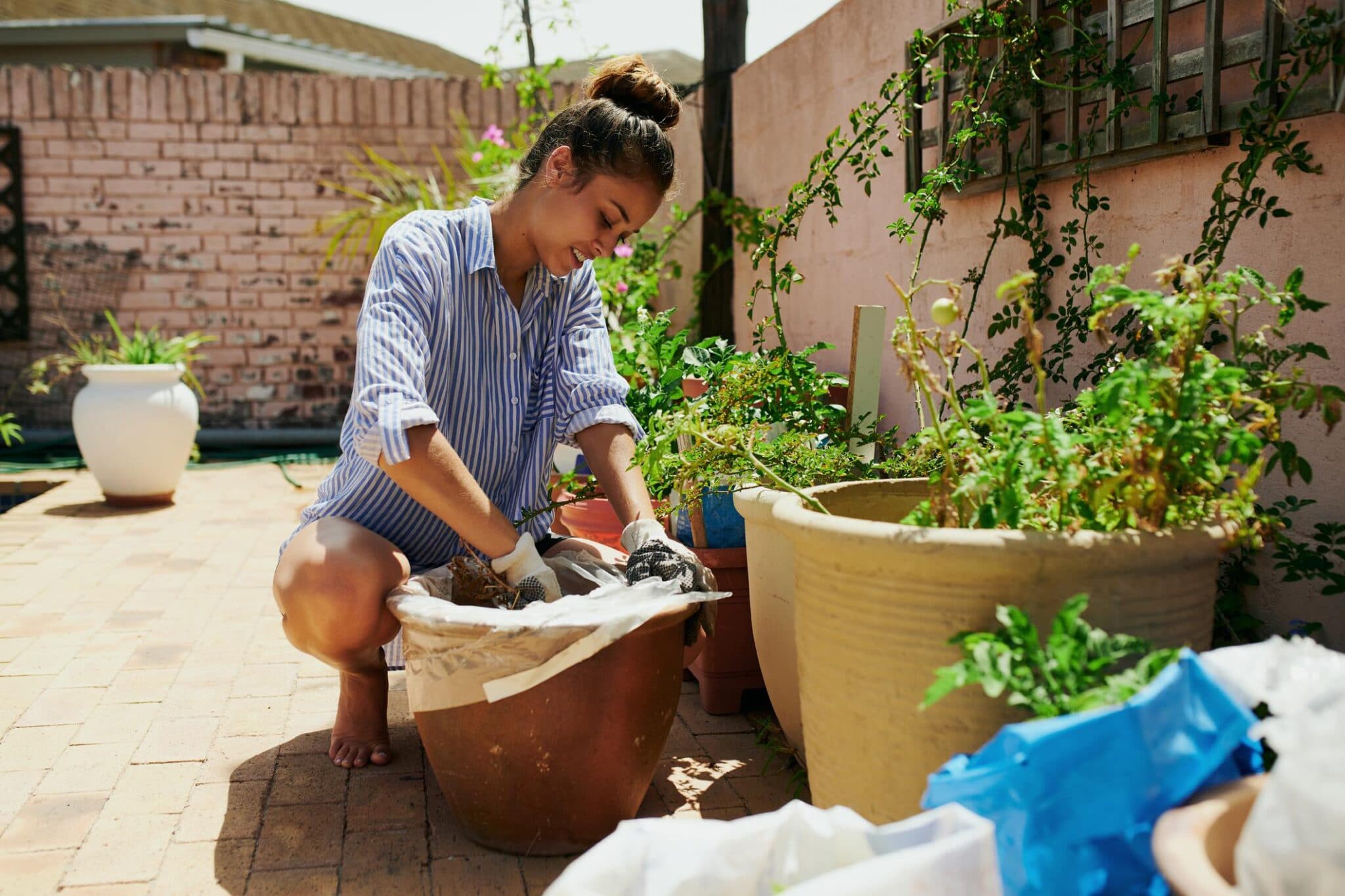 As you begin your composting journey, make sure you know what items can be composted. To prevent the growth of harmful bacteria, meat and dairy products should be kept out of most small-scale composting systems, although larger composting facilities – where compost piles reach very high temperatures – might accept them.

Once your food scraps have completed their journey from “trash” to fertilizer, you’ll have plenty of black gold to use. If you have limited outdoor space, or no garden on which to spread your finished compost, use it to fertilize house plants or window boxes, or offer it to friends and neighbors who might need it for their own gardens.

Apartment-composting requires some creativity! Consider all of the options in your area – whether it be a drop-off location, pick-up service, or city-run program – as well as your personal limitations and desires. Even with limited space, you can lower your environmental impact and give your waste a second life through composting.

Linnea graduated from Skidmore College in 2019 with a Bachelor’s degree in English and Environmental Studies, and now lives in Brooklyn, New York. Most recently, Linnea worked at Hunger Free America, and has interned with WHYY in Philadelphia, Saratoga Living Magazine, and the Sierra Club in Washington, DC.

Linnea enjoys hiking and spending time outdoors, reading, practicing her German, and volunteering on farms and gardens and for environmental justice efforts in her community. Along with journalism, she is also an essayist and writer of creative nonfiction.