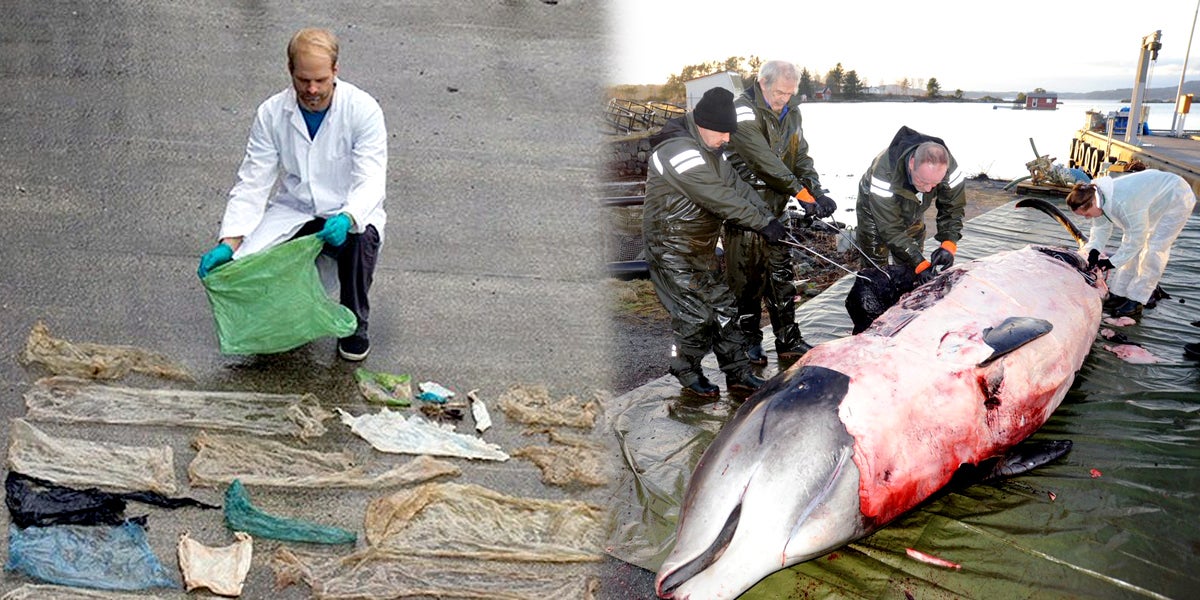 Norwegian zoologists have discovered some 30 plastic bags and other marine debris inside the stomach of a malnourished 20-foot Cuvier’s beaked whale.

The whale was an adult male that weighed about 2 tons. Local authorities were forced to euthanize the distressed animal on Jan. 28 after repeatedly stranding itself off the shallow waters of Sotra, an island near Norway’s southwestern coast.

After it was put down, University of Bergen researchers analyzed the whale’s stomach and determined that the various non-biodegradable objects were likely the cause of death.

“Our whale was emaciated; little fat and low weight. But its stomach was full of plastic, which likely killed it,” University of Bergen associate professor Hanneke Meijer tweeted.

According to NRK, large quantities of small plastic as well as candy wrappers and plastic bread bags were found in addition to the 30 plastic bags. The items had packaging and labels in Danish and English.

University of Bergen associate professor Terje Lislevand told the Associated Press that the whale’s intestine “had no food, only some remnants of a squid’s head in addition to a thin fat layer.”

Lislevand also told Norwegian publication Bergens Tidende that the whale was likely in pain due to its clogged stomach.

“The plastic was like a big ball in the stomach and filled it almost completely,” he said.

The whale might have mistakenly ingested the plastic bags thinking it was squid, its preferred source of food.

Lislevand remarked that the animal was one of the first Cuvier’s beaked whales to be spotted near Norway.

EcoWatch has documented many instances of whales suffering and even dying because of plastic waste. But ocean plastic is not just a problem for whales. Fish, seabirds, turtles and many other marine creatures are choking from the 8 million metric tons of plastic garbage that enters our oceans every year.

Unfortunately, if consumers do not reduce their use of plastic and plastic-intensive goods, the problem will only get worse. A widely reported study found that there will be more plastic than fish in the ocean by 2050 if the world continues to consume and dump this form of non-biodegradable waste at current rates.